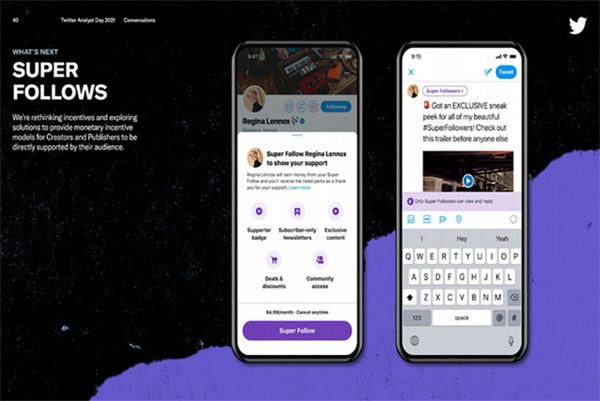 Also revealed by Twitter on Thursday (25 February) was “Communities” – albeit with less detail. It looks to be a tool that would allow you to create and join groups that have a particular theme or interest, similar to Facebook Groups.

This announcement follows the recent launch of Spaces, a Clubhouse competitor, and the recent acquisition of Revue – a Substack rival – to build out Twitter’s long-form editorial and newsletter offering.

We’re seeing a real change of pace for Twitter, which has become notoriously slow to adapt its product offering over the past few years. Jack Dorsey even opened Thursday’s presentation to investors by acknowledging it: “It comes down to three critiques: we’re slow, we’re not innovative, and we’re not trusted.”

It’s trying to shed that reputation and quickly, with a slew of new product releases that fit neatly with the underlying shifts we’re seeing in the social space right now.

These product launches are not random but overlapping and interlinked. It’s clear that this new-found intensity has come out of Twitter rethinking its strategy.

The objective is obvious for all to see: to build a full-stack set of tools that drive and service the creator economy. Twitter is looking to offer everything creators need to build, reach, and monetise their audiences – all under one roof.

Twitter is betting big on “Creators” with a capital C, and I think it’s right to do so. It’s clearly the direction that the wind is blowing in this new “era” of social – with the growth of TikTok and Clubhouse being almost exclusively down to the individuals who’ve adopted their platform to spread their content.

Up to now, social media has been an almost entirely ad-funded environment – it’s how the platforms make their money. They gain attention and they then sell that attention to advertisers. Creator tools like this offer a different revenue stream that only looks set to grow over in the coming years.

Moves like this from Twitter will cement creators’ place in the centre, not the periphery, of this new wave of social platforms. It will give them the power to build better, and the incentive to do so, with more sustainable streams of income that don’t rely just on brand deals.

And so all of this raises the inevitable question: what does it all mean for brands?

Ultimately, this shift in power towards creators means that brands need to lean in. Creator relationships are quickly no longer becoming a “nice to have” to supplement your media plan.

To build experiences that are fit for this new environment, we need to be working alongside them and making the most of everything they have to offer.

The rise of the creator is what looks set to define the next generation of “social media” – and smart brands will embrace that.