The Year in Spotify 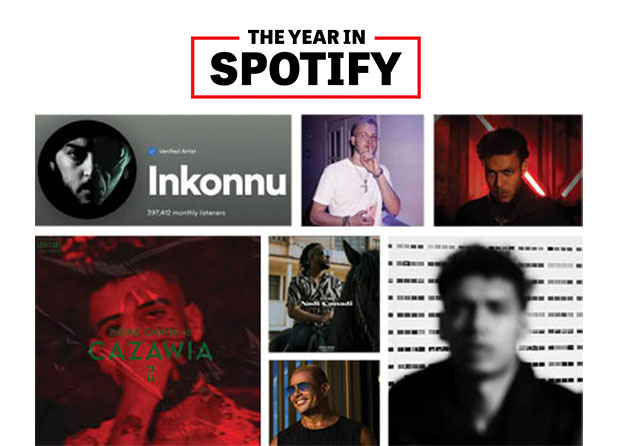 If 2020 was the year that flipped the world on its head, 2021 was the year that we got used to seeing things upside down. With “normal” thrown out the window, we embraced the unknown and championed all the things that make each of us unique. Audio streaming service Spotify’s 2021 Wrapped is a celebration of this – the millions of weird and wonderful ways to listen and live in a world that continues to keep us on our toes. Spotify unveiled the top MENA artists and songs from the creators that helped soundtrack the year for more than 381 million users worldwide.

So, how did the Arab world listen this year? Here’s what Spotify saw:

Most streamed Arab artists in MENA:

Most streamed Arabic songs in MENA:

Saudis love international music, with Masked Wolf’s ‘Astronaut In The Ocean’ becoming the most-streamed song of 2021 and BTS becoming the most-streamed artist this year. But beyond international music, Sheilat – a traditional genre that has been evolving recently –  has been striking a chord with local listeners. Abdullah Alfarwan, an eminent figure in the genre who is leading the way with bringing poetry that was sung amongst tribes in previous generations to an upbeat beat that is enjoyed by the youth, has earned his spot as the most-streamed Saudi artist in the country for Wrapped 2021. He also bags two spots in the most-streamed songs top 10 list with ‘Leh El Jafa’ coming in second and ‘Wesh Ozark’ coming in ninth. Commenting on the news, Abdullah Al Farwan said: “I want to thank my fans for their support and love. I am thrilled to be the most-streamed Saudi artist for Wrapped 2021 on Spotify.”

For the second year in a row, the globally beloved K-Pop group BTS is the most-streamed artist in the UAE and the third most-streamed worldwide. Canadian powerhouses Drake (who released Certified Lover Boy in September), Justin Bieber (whose 2021 album Justice featured collaborations with artists from across the globe) and The Weeknd take spots two, three and four, respectively. They are swiftly followed by singer-songwriter Taylor Swift, whose Red (Taylor’s Version) gave old and new fans alike a reason to relive the artist’s early groundbreaking work and who is the second-most streamed artist globally.

The top song of 2021 in UAE is Lil Nas X’s viral ‘Montero (Call Me By Your Name)’. Masked Wolf’s ‘Astronaut in The Ocean’ comes in second. The Kid Laroi enters the ranks for the first time, with his Justin
Bieber collaboration ‘Stay’ taking third place both in the UAE and globally. The fourth spot is Dua Lipa with ‘Levitating (feat. DaBaby)’, and Olivia Rodrigo comes in
fifth, with ‘Good 4 U,’ which also earned
the title of 2021 Spotify Song of the
Summer globally.