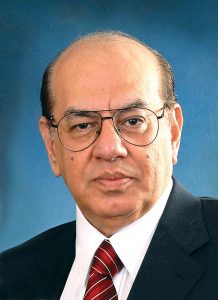 The Middle East advertising industry has been remembering Tanvir Kanji, who died this week.

Tanvir Kanji, chairman of the Inca Group of Companies – including the group’s flagship Inca Tanvir Advertising, – died on January 2, 2022, at the age of 78.

Kanji set up one of the Middle East’s first full-service advertising agencies in 1976 in Sharjah, UAE. He had visited for three weeks the previous year, and was “convinced that this is where I wanted to be”, he told UAE newspaper Khaleej Times in a 2015 interview. He would later become a founder of the UAE chapter of the International Advertising Association (IAA) and was president of the chapter until 2006.

In 2006 Kanji was awarded the IAA’s Medal of Merit, and Publicity Man of the Year awards. In 2009 he was named Advertising Person of the Year by Dubai Lynx.

Marwan Kai, CEO of Media Interactive Services Gulf, said: “I had the privilege of serving with Tanvir on multiple IAA Executive Boards and was his VP for the best IAA World Congress ever held in Dubai in 2006.

“Tanvir was a man of integrity, wit and charm. He worked tirelessly to ensure the industry’s voice was heard, to encourage the youth to take up a career in the marcomms world and to grow the size of the industry across the MENA region

“Like the group of Lebanese that escaped the Civil War in Lebanon and came and set up their agencies in Dubai, Tanvir left his native India to come and seek a better future in the UAE and succeeded in creating a hugely successful agency in the UAE, as well as other businesses.

“Tanvir will be dearly missed by his friends in the ad industry and beyond; he will always be remembered for his charm, energy and honesty. RIP Tanvir.”

Ian Fairservice, CEO and group publisher of Motivate Media Group, said: “I’m deeply saddened by the passing of Tanvir, a friend and colleague of over 40 years. He opened his advertising agency a couple of years before we launched What’s On in 1979 and was always encouraging and hugely supportive.

“We shared many memorable experiences Both founding members of the International Advertising Association in the Emirates, we served consecutive terms as IAA-UAE President and attended several world congresses together, along with others on our very active and close-knit board.

“Tanvir was a brilliant adman and personally highly creative. Yet, unusually in our industry, he was not showy but discreet, humble and extremely generous in his help to others. A trailblazer of the Middle East advertising industry, Tanvir will be greatly missed and very fondly remembered.”

Philip Thomas, chairman of Ascential Marketing Division and Chairman of Lions, the organisation behind Dubai Lynx and Cannes Lions, said: “When the Lions organisation was asked to join forces with the UAE chapter of the IAA in 2007 to launch Dubai Lynx, Tanvir was one of the first people I met in the region. A few years later, he was the obvious choice to be awarded 2009’s Advertising Person of The Year. He was a true pioneer of MENA advertising, and a huge success almost from the beginning, but my memory of him is as a truly generous, humble and charming person. It is common to say such things after someone’s passing, but I remember so well the night of his award, his humility, he charm, and his mischievous good humour. He was always a great friend to us as we tried to establish Lynx across the region, and we at Lions and Lynx send our deepest condolences to his family for their loss.”

“Tanvir’s contribution to the growth and success of the IAA UAE chapter will never be forgotten. He served the IAA UAE for over forty years.

“As Dubai grew, so did the IAA UAE chapter,  and its recognition reached new heights under Tanvir’s presidency when it hosted the world congress in Dubai in 2006.

“The congress welcomed over 2000 guests from 67 countries and went down in history as one of the IAA’s most successful world congresses.

“Tanvir was an inspiration to everyone in the advertising field and will forever be remembered as an industry leader, a gentleman and a great friend to all that knew him.

“The members of the IAA UAE, offer their sincere condolences to his family. May he rest in peace.”

Mohan Nambiar, CEO of Radix Media, said: “My dear friend, he went too soon. Tanvir’s passion for advertising, even at his age, was something that I didn’t come across with many people.  He was always grounded and practised what advertising is.   He was detail oriented, committed with absolute passion and I think he really lived the world of advertising.  RIP my dear friend Tanvir.”

Avi Bhojani, group CEO of BPG Group, said: ““anvir was, first and foremost, a gentleman. Upright, principled and always ready to do his part. I had the good fortune of having known Tanvir since my early days in Dubai in late 80s. While professionally we did not work together, we both had long stints in an Indian agency, Ulka ( now FCB India) – he in the 70s and me in the 80s. Tanvir stayed independent out of choice and was perhaps one of the best ad men to have worked in UAE. RIP Tanvir, you will be missed ”

Ramzi Raad, group CEO of TBWA/RAAD Group Middle East, said: “When I landed in Dubai to open a branch for Intermarkets in October 1975, I asked if there were other advertising agencies in the UAE? The name of Tanvir Kanji and his agency Inca Tanvir – in Sharjah – were amongst the three names that were given to me at the time.

“Then when I was awarded the Advertising Man of the Year 2010 title, the press release issued by the organisers, stated that Tanvir Kanji was amongst the first recipients of this recognition in 2009.
“Tanvir was a noble colleague and a dear friend who was instrumental in the establishment of the UAE Chapter of the International Advertising Association (IAA) and got elected as the chapter’s president in 2006.
“Dubai and all of us – the old ad men here – are already missing a dear honest and professional competitor.