New feature will be rolled out across iOS, Android and Twitter.com 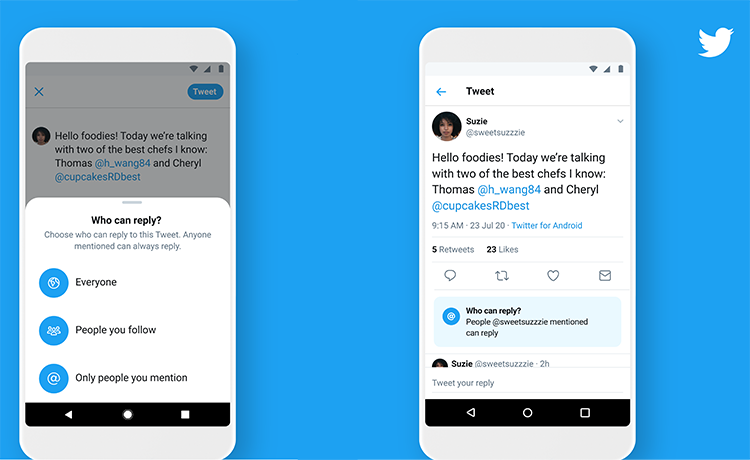 The conversational controls allow people on the platform to choose who can reply to their Tweets in advance, with three easy options: 1. everyone can reply (the standard default setting), 2. people you follow can reply, or 3. people you tag within the Tweet can reply. When selecting the latter two options, Tweets will be labeled, and the reply icon will be grayed out for those not included. People who can’t reply will still be able to view, Retweet, Retweet with Comment, share, and like these Tweets.

The new feature was rolled out to a limited audience in May and, following testing, Twitter analyzed how people were using it, collecting feedback through interviews and surveys. The results of the testing phase highlighted how the settings helped enrich people’s experience on the platform in the following ways:

Following the testing phase, people on Twitter reported feeling more comfortable on the platform, as the controls helped protect them from spam and abuse, with those who have submitted abuse reports three times more likely to use the settings. Similarly, Twitter found that for every three potentially abusive replies prevented with these settings, there’s only a single additional potentially abusive Retweet with Comment and there wasn’t an uptick in unwanted Direct Messages. As a result, 60% of people who used this during the test did not have to employ Mute or Block.

Twitter also found an increase in more meaningful conversations taking place on the platform, with Tweets using these settings about social issues such as Black Lives Matter and COVID-19 longer on average than those without the conversation controls. People felt more comfortable engaging in sensitive conversations about politics and social issues, while those with high followings employed the controls to share more personal thoughts, opinions and news.

Throughout testing, Twitter saw continued interest in various points of views with the new Retweets with Comments timeline visited four times more often on Tweets using the settings. As a result, on several occasions a Retweet with Comment generated higher engagement than the original Tweet in spite of numbers of followers.

With a commitment to serving the public conversation, Twitter will continue to update and improve the settings in line with people’s feedback. Over the course of the coming months, Twitter will be testing a new label to make it more obvious when conversation settings are used, and there are plans to add-in an option to invite more people to the conversation after it starts, clear notifications indicating when you have been invited to join a conversation, and more ways to see the entire discussion.