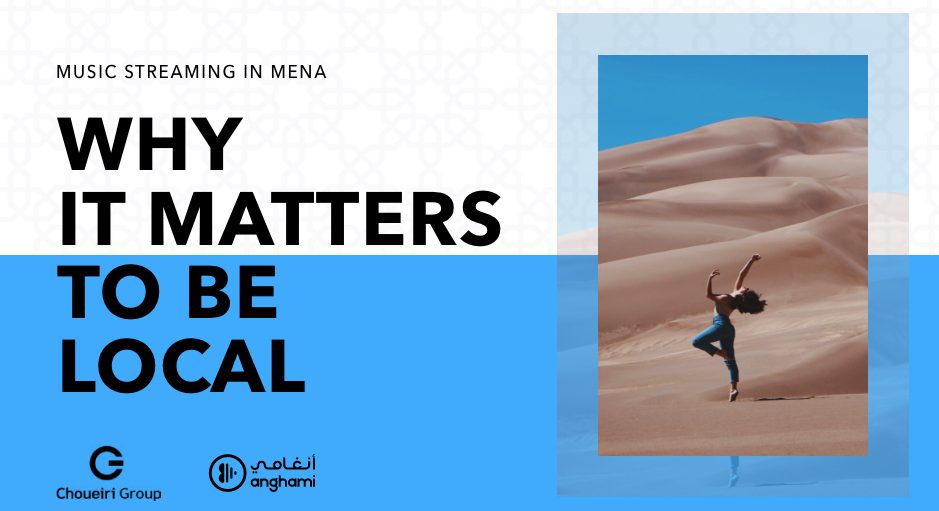 With CD sales and downloads declining sharply, music streaming services have taken centerstage across the global music industry. The MENA region is no exception and has over the past few years witnessed staggering growth in online listenership.

Music streaming platforms have also become part of users’ daily lives and routines either as their ‘getaways’ or ‘companions’. This disruption has led to a bond which builds a sense of attachment and consequently establishes trust. This scenario also generates an exceptional window of opportunity for brands and advertisers.

With the above context in mind, Choueiri Group and Anghami commissioned Ipsos to conduct a market understanding initiative centered on the music streaming industry. It explores the potency of brand love in advertising, along with its impact on listeners’ consumption in key regional markets (Egypt, Saudi Arabia and the UAE). The in-depth study is titled “Music Steaming in MENA – Why it Matters to be Local”. The study has generated many insightful results which shed light on how the regional music streaming industry will play out its evolution, in addition to the perceptions of music streamers across the region and their attitudes towards the different services being offered to them.

In the past decade, many local and international players have set foot in the audio streaming arena across the MENA region, which created a highly competitive space for platforms, all fighting for listeners’ ears and complete undivided attention. In that cut-throat space, there are international brands that have been in this industry for some time now such as Spotify and Deezer, both originating from Europe, and are undeniably making waves in the region. Then on the other hand, you have local players, such as Anghami that positioned itself as the MENA streaming platform that provides an offering that is close to the Arab streamers’ culture and identity.

With total brand awareness about most music streaming platforms increasing swiftly across Saudi Arabia, especially among millennials aged between 25 to 34, this year has also been a breakout year for podcasting worldwide, resulting in more listeners picking up on this relatively new channel of entertainment.

This has been specifically proven in the region as around 30% of UAE’s and 20% of Saudi Arabia’s population consider themselves as podcast listeners. The research shows that  5 out of 10 of music streamers listen to music online on daily basis, with around 30% using these services at least 5 hours a day. These results refute the notion of music streaming not being an activity that users fully integrate in their day to day life. It was also proven that, aside from Facebook, music streamers dedicate a big chunk of time during the day to listening to music online on weekends and weekdays, more so than they do with radio and other social media platforms such as Instagram. Music streamers also enjoy listening to music online the most when they are relaxing in the comfort of their own homes, followed by when they are commuting or driving around. Moreover, it was noticeable that music streaming platforms are the best and most used method in helping music lovers explore and discover new releases and up and coming artists.

Amongst numerous interesting insights which were garnered from this research, the most important area identified was regarding the potency of having a platform with a localized personality appearing on the audio streaming scene.

Listeners in the Middle East were missing the flavour of home and the sense of relatability which was tenuous among the international music streaming platforms available for users. Arab listeners were also growing a need to feel recognized and have their identities understood and identified with. With all of these findings coming into play, having localized attributes and an essence of “home” built in your music streaming brand are highly appreciated and favored by consumers, as this helps platforms lever for growth and creates more relevance to listeners in the market. Consequently, it helps placing them on a higher pedestal for their unique offerings, especially in the audio streaming sector. The study serves as a mere reflection of the rapidly evolving world of audio streaming, and only time will tell how this will inherently shape up the music and advertising industry in the future.