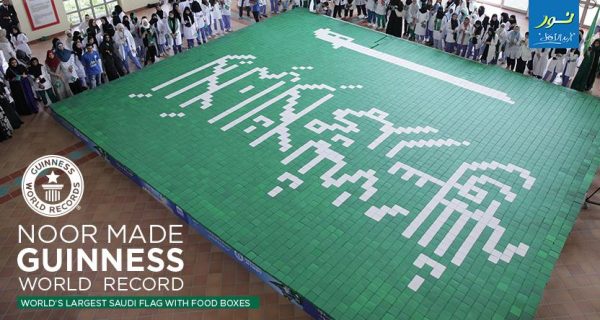 This year, the celebrations of the Saudi National Day on September 23rd were held under the slogan:      “Saudis’ mettle is like that of the Tuwaiq mountain”- inspired by the words of the Crown Prince Mohammed bin Salman. Noor, a local Saudi brand- the number one selling sunflower oil in the Middle East- was determined to create a special event that befits the National Day celebrations and marks its proud participation in it.

For the occasion, Noor teamed up with Guinness World Record to create the world’s largest Saudi Flag made with the best Saudi culinary creations from Saudi women- making the idea stand out for its novelty and inspirational purpose. The brand invited Saudi women to express their pride for their nation by pledging support to the event and by submitting their food creations to be part of this historic initiative. 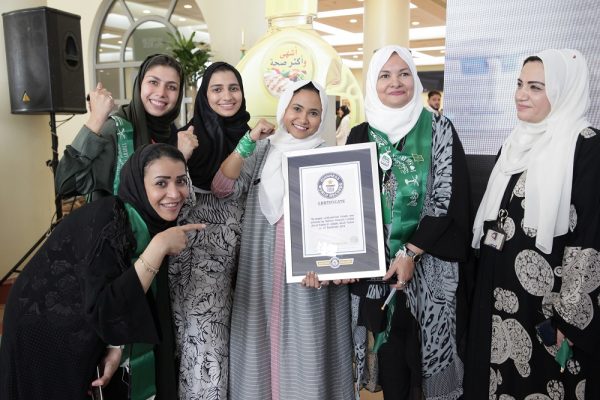 The campaign received enthusiastic responses with more than 44,000 Saudi women wholeheartedly pledging their support on the microsite (clubnoor.com/infinitepride) and contributing around 89 of their most delicious food creations using Noor to express their pride for the nation. The best of their recipes made it to the Guinness World Record event of making the world’s largest Saudi National Flag with food boxes. At the end of the event, the food boxes were distributed among those in need across the city through Saudi Food Bank.

This special gathering took place on 24th September in Al Batterjee Medical College- Jeddah, in the presence of a large cheerful crowd with high national spirit, and the representatives of Guinness World Records. The participating women were excited about their achievement and captured the exceptional moment by taking selfies with the largest Saudi National flag made of food boxes.

Khalil Naciri, Head of NOOR Corporate Marketing, spoke during the event “It was an honour for us to be part of the 89th Saudi national day celebrations. Our initiative – “Infinite creations, Infinite Pride” aimed at providing a platform to Saudi women where they can express their love for the country by submitting their food creations. NOOR believes – Women’s role is beyond the kitchen; they are not just home organizers; they are creators of infinite possibilities. The new NOOR campaign is a tribute to all those extraordinary women from all walks of life.”

Amir Qadri, Head of NOOR Saudi Marketing team shared that “Noor is a proud local Saudi brand that has been part of Saudi culinary journey since the last 3 decades. NOOR has been changing its bottles from BLUE to GREEN previously on the occasion of National Day. This year we decided to raise the bar when Saudi women came together under the platform of NOOR to add another prestigious world record title to the existing titles of Saudi. It’s the infinite enthusiasm of Saudi women that made the whole event possible.”

National Day has been an occasion of festivities and entertainment every year at Batterjee Medical College, and thanks to NOOR & its efforts, this year students took part in a purposeful event with a humanitarian touch. It was a day to remember for many proud Saudi women and a thoughtful launching pad for future significant activities by NOOR and others.