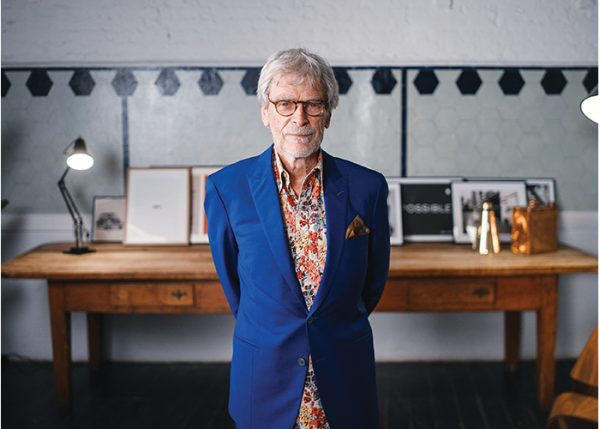 Sir John Hegarty is launching an online course titled The Business of Creativity. Over eight weeks, Hegarty will aim to unlock the enormous impact creativity can have on a team – covering areas such as mastering the brief, how to nurture and assess an idea, encouraging a creative culture, the art of storytelling and how to overcomethe fear of a blank page.

London International Awards, one of the leading international awards shows, is sponsoring a placement on the course, worth £1,500. Campaign Middle East is going to give that place to one of our readers. To find out how it could be you attending this once-in-a-lifetime masterclass, check out the box below.

John Hegarty is one of the most respected advertising people alive. He was a founder of Saatchi & Saatchi, co-founded TBWA London, and along with John Bartle and Nigel Bogle he started BBH in 1982. He has created such iconic work as Audi’s ‘Vorsprung Durch Technik’, and ‘Bath’ and ‘Laundrette’ for Levi’s. In 2007 he was knighted for services to advertising.

The format of the Business of Creativity course will comprise of four main components: weekly lectures hosted by Hegarty, a bi-weekly Q&A with him, curated supporting material, and eight inspirational weekly guest speakers. The course has been designed to be relevant for all levels of seniority, and the first cohort launches on September 19.

On a video call from London, where he is based, Hegarty tells Campaign that advertising has an image problem – people don’t like the way targeted advertising “stalks” them. New channels have brought the promise of efficiency to advertising, but while there’s nothing wrong with targeting when you have permission to target, “great brands inspire people to come to them,” rather than following them across digital platforms.

“The brands that really deliver a return to their shareholders are the ones that create the sense they are helping make the world in some shape or form a better place in terms of the services they are offering,” Hegarty says.

Mass communication has become distrusted by business leaders looking for efficiencies. CEOs are often from a finance background, rather than a creative one, so targeted advertising appeals to them.

Hegarty is no fan of the aphorism, ‘Half the money I spend on advertising is wasted, I just don’t know which half’. “Doesn’t it sound clever?” he asks, before answering himself. “It’s the most stupid thing ever said about advertising, the most stupid. And it’s persisted in our industry because it sounds smart, it sounds clever.”

“I’m on this bandwagon of trying to get people to understand the value of creativity,” he says, and starts to cite McKinsey studies proving that creativity generates returns. Businesses are “creative constructs,” he says. “Creativity should be core to what they are doing, it should be core to everything they do. It’s like breathing for an athlete.”

Hegarty’s course, like his crusade, is about encouraging businesses and the people within them to engage positively with creativity and not be afraid of it. Nor should creatives be afraid of technology, he says. But that too often tends to be the case.

“When an astonishing piece of technology appears, essentially creative people kind of stand back and say, ‘We don’t know what to do with this, but oh my God this is amazing.’ So the technologists become the heroes.”

However, technologists lack the imagination of creatives. When Guttenberg invented the printing press, the only book he printed was the Bible, which “had been around for 1000 years and wasn’t exactly breakthrough”. When the Lumiere brothers invented the moving-picture camera, they “gave up on it; they didn’t know what to do with it because, really, they were technologists, they were more interested in the technology”. It took a while for Hollywood to marry the tech with creativity, while in the meantime the Lumieres “went back to taking not very good photographs”.

By contrast, says Hegarty, “What creativity does is it takes a number of known assets and it reassembles them in a way that sparks your imagination.” He uses the iPhone as an example. “All that technology was out there,” he says. “Nokia could have created the iPhone but they didn’t see it; someone at Apple did.” Or Audi. By adding four-wheel drive to performance cars – as opposed to off-road vehicles – and creating the Quattro in 1980, the automaker rejuvenated its brand.

Hegarty’s Business of Creativity course will give people the confidence to build their case for creativity, and give them the economic arguments to win over those anti-creatives or pure technologists and efficiency fanatics who see creativity as an add-on rather than central to business.

In this sense, the course is as much about the creativity of business as the business of creativity.

Competition is now closed and the winner has been announced.