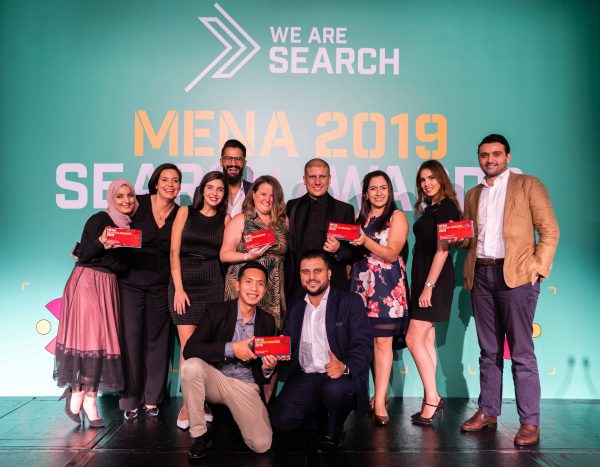 Following last year’s achievements, Chain Reaction becoming the most awarded agency in the MENA Search Awards for the second year in a row with five wins this year.

Chain Reaction, the marketing agency that made its debut in the digital marketing field on a strong note, was part of the MENA Search Awards 2019 which took place at Madinat Jumeriah Conference Center in Dubai alongside many influential competitors. Shortlisted for 16 awards in 13 different categories, the agency had a powerful stance during the ceremony with the presence of its founder, Saif Jarad and his dream team.

Best Use of Search for KFC’s campaign “Alone We Are Delicious, Together We Are YUM” and Best Low-Budget Campaign for the “Achieving the Impossible” – Boncafe SEO Campaign, are two of the five awards that Chain Reaction scored that night. Others being Best Mobile Campaign for Lamsa’s “Expanding Horizons” and Best Large SEO Agency in the MENA region.

The agency was also awarded with the Best Arabic SEO Campaign for Samsung Levant’s “Star Seekers: Navigating Success in Arabia” campaign, which was also presented to Chain Reaction during last year’s MENA 2018 awards.

“We are extremely proud to be part of this remarkable ceremony for the second year in a row. Being amidst incredible talent and strong leaders of big agencies around the MENA region feels surreal. Having won 7 awards last year and 5 awards this year, my team and I am extremely grateful and are highly motivated to strive for more success.” says Saif Jarad, the founder & CEO of Chain Reaction.

The agency that was once a start-up is now said to have created a chain reaction of success, earning the support of the people, attention of the region and awards for its hard work.

Tear up those playbooks: In the new normal, everything has changed by ASDA’A BCW’s Sunil John