According to the Guinness World Records, YouTube creators set a record viewership of 183.5k+ concurrent viewers

While countries are seeing lockdown restrictions lifted and some semblance of normal life is starting to resume, six YouTube creators rallied their followers in Saudi Arabia to break their fast with them in Saudi Arabia, achieving a Guinness World Records title for Most viewers for an Iftar YouTube live stream with 183,544 concurrent viewers.

The livestream began at 7pm GST, on Mohamed Moshaya’s family-focused YouTube channel and lasted for an hour. This initiative helped maintain social distancing norms in the Kingdom and encouraged the communal spirit of Ramadan.

Unfolding at Mohamed Moshaya’s YouTube channel, viewers joined the virtual Iftar for both the record attempt and closer catchups with some of the region’s biggest content creators with YouTube sensations Noor Stars, Abdullah and Abdulaziz Bakr whom together run The Saudi Reporters, Anasala Family, Asrar Aref, and Omar Hussein.

Combined, these creators are followed by 45M+ people on YouTube only, with multi other millions in their other pertaining social channels were also invited to the livestream.

All done by the book (literally), Shaddy Gaad, Senior Marketing Manager, Guinness World Records said: “We extend our sincere congratulations to YouTube’s creators community in Saudi Arabia on their achievement. Their will to spread the word through a world-record attempt paid off, where thousands of people watched the attempt online, while many others heard the news in both traditional and social media channels.  It is now important, perhaps during these difficult times more than ever, to connect with communities digitally.” 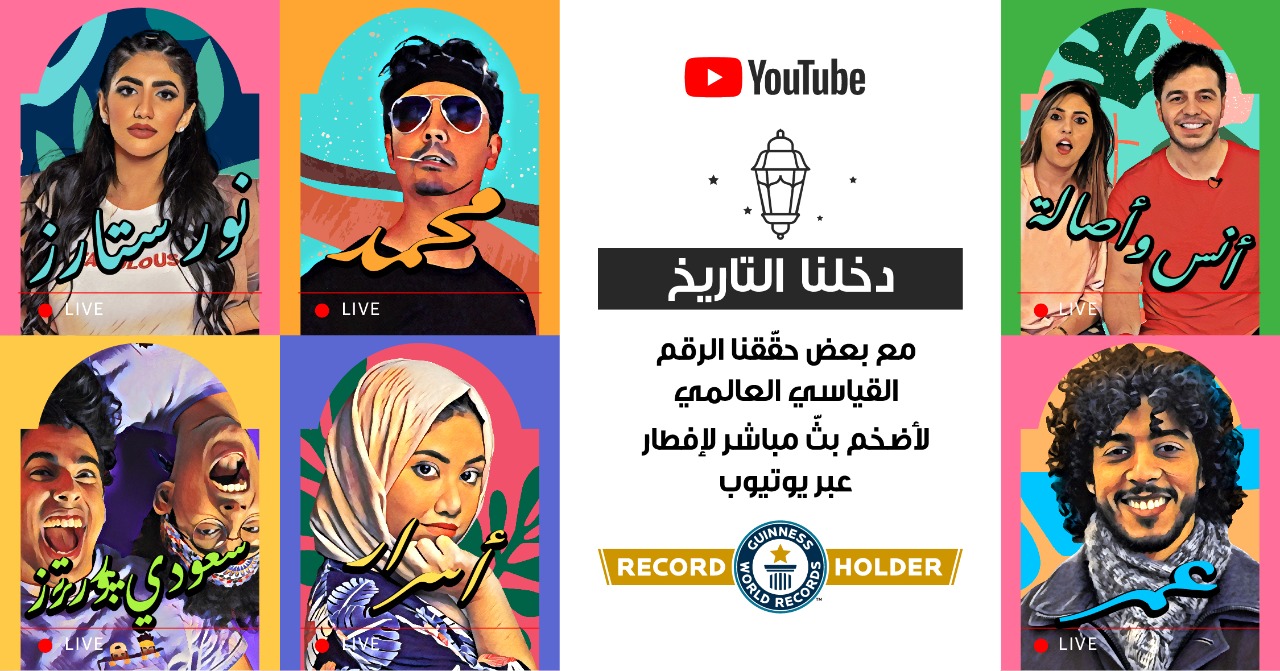 “By hosting a record attempt online, the participating YouTubers opened up a world of possibilities to connect and break their fast with fans all over the globe while remaining safe at home,” elaborated Gaad.

Head of YouTube Partnerships in MENA Diana Baddar said “For years, YouTube creators in Saudi Arabia have built communities that have helped millions of viewers throughout the kingdom, laugh, learn, and even create. We are delighted to collaborate with the Arab world’s most loved creators to live stream the virtual Iftar. And I am proud to see them come together to create this memorable experience on YouTube that shows the platform’s power in bringing people together during this difficult time.”

Mohamed Moshaya, Saudi YouTube creator, said “Ramadan is usually a time where friends and family gather in mosques and homes to break the fast and pray together. However with this global pandemic, Ramadan this year feels very different, which is why I decided to enlist a couple of my friends in the YouTube community to come together and turn this moment of isolation into celebration. The livestream was truly amazing, and it was moving to see so many in our communities participate. It was such a proud moment when Guinness World Records said we set a new title with over 183.5k concurrent viewers”, said Mohamed Moshaya.

GWR recently introduced a wide variety of online record titles that can be attempted across a broad range of digital platforms including popular social media sites, video conferencing apps and bespoke systems. This allows brands and individuals to organize record-breaking campaigns through live streaming, online pledges, virtual hangouts, video relays and so on. GWR says it is now verifying attempts globally through a service called ‘Remote Adjudication, where an Official Adjudicator is not present onsite but online with a list of required evidence include video recordings.

Danny Hickson, Official Adjudicator in GWR MENA said: “The collaboration between the creators to use YouTube as a platform to come together resulted in a well-deserved world record title. Congratulations, You are Officially Amazing.”