Users in the region are now able to share their creations broadly on Snapchat, reach a large audience, and be rewarded for their creativity 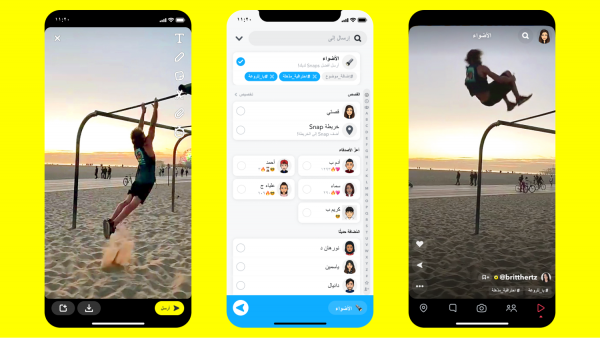 With its popularity already starting to skyrocket globally, Snap Inc. has launched its new entertainment platform Spotlight in markets across the Middle East and North Africa (MENA), enabling its audience of approximately 75 million users in the region to now shine a light on the most entertaining Snaps created by the Snapchat community. With around 5 billion Snaps created each day on average, Spotlight empowers the Snapchat community to express themselves and reach a large audience in a new way.

Spotlight surfaces the most entertaining Snaps from the Snapchat community all in one place, and will become tailored to each Snapchatter over time based on their preferences and favourites. The new entertainment platform for user-generated content within Snapchat welcomed over 100 million users as of January 2021, just two months after its release.

Spotlight was designed to entertain the Snapchat community while living up to Snapchat’s values, with their wellbeing as a top priority. While anyone on the app can share their best Snaps, Spotlight content is moderated and doesn’t allow for public comments. Snaps submitted to Spotlight must also respect the platform’s content guidelines to receive distribution.

Snap’s earning program will also be available in MENA, celebrating and rewarding the creativity of local Snapchatters and offering a chance for creators to earn a share of millions of USD every month. Snapchatters don’t have to be a celebrity, influencer, or public figure to earn from their Snaps, making Spotlight fair, fun, and rewarding for everyone. Snapchatters do need to be 16 or older to earn, and where applicable, obtain parental consent.

Hussein Freijeh, general manager of Snap Inc. in the Middle East, said: “Across our region specifically, Snapchatters have long understood the holistic value proposition of the platform–whether in chat, maps, stories, or content–but have been asking for ways to share their content more broadly. Spotlight is thus an exciting new addition, a result of careful thought and insight into what our community wants, likes, and values. It is also built with our privacy-by-design philosophy, with the wellbeing of our community front and centre. Our hope is that Spotlight continues to break down barriers to content creation and by democratising both distribution and the ability to earn, encourages Snapchatters to be creative and express themselves.”

Consumption rates on Snapchat in the MENA region are often higher than the global average, with over 85 per cent of its MENA daily users interacting with Lenses every day. Based on a recent study released by Snap, the “Snapchat Generation” in the Middle East also places tremendous value on their connections with family and friends, with tools such as communication and camera apps helping to keep those relationships strong. The region’s Snapchat Generation is, for example, 1.2x more likely than non-Snapchatters to feel like they are a part of others’ lives via their stories on social, communication, and camera apps.