Ads released in the wake of Capitol Hill riots. 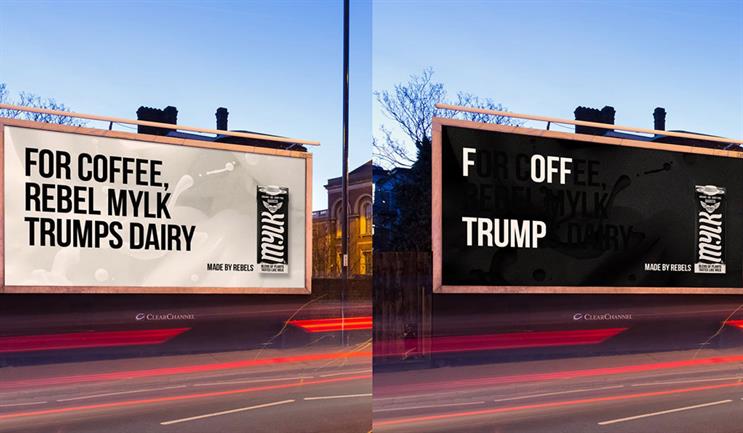 Former US President Donald Trump is in the firing line in a digital out-of-home campaign by dairy-free milk brand Rebel Kitchen.

The ads shift from a seemingly-innocent sentence about product superiority to a pointed message directed at the former president, for example “for coffee, Rebel Mylk trumps dairy” promptly shifts to declare “F off Trump”.

Another ad, which initially reads “Nothing trumps a nice glass of milk”, fades to revealing the sentence “Trump’s an ass”.

The ads appeared on Rebel Kitchen’s Twitter account this week to promote Rebel Mylk’s Organic Barista Mylk, which was launched as part of the brand’s Veganuary campaign.

They’re set to appear across the UK throughout January, in partnership with Clear Channel.

“From our no-compromise Mylk recipe to our consumer messaging, we never settle. We are rebels with a cause, so we take risks and never shy away from telling it like it is.”

The campaign follows on from Rebel Mylk’s summer campaign, in which a normal phrase was obscured to read “jog on milk”.

Drop the mic, Rebel. Oh no, there seems to be a glitch here…comment the hidden message when you spot it Rebels. #ooh #ad #billboard #rebellion pic.twitter.com/Tv0THQR48N

“Rebel Kitchen Mylk is a genuinely better alternative to dairy for those looking for an easy switch, a more sustainable option.”

On Friday, Twitter permanently suspended Trump’s personal account in the aftermath of the riots on Capitol Hill.

Other platforms including Facebook, Instagram and Twitch have disabled Trump’s accounts until the end of his term on 20 January.

Although his term is due to end in a week, Trump is also facing a second impeachment process, with some of his colleagues in the Republican Party joining Democrats in calling for his removal from power.

Unsurprisingly, Rebel Kitchen isn’t the only brand to take aim at Trump during his presidency.

In 2016, shortly before his election as President, Gourmet Burger Kitchen compared Trump to “a bit of an arse”, while the Women’s Equality Party made fun of his tiny hands.