TikTok is calling on its community to show off their filmmaking skills with the #FilmOnTikTok competition. 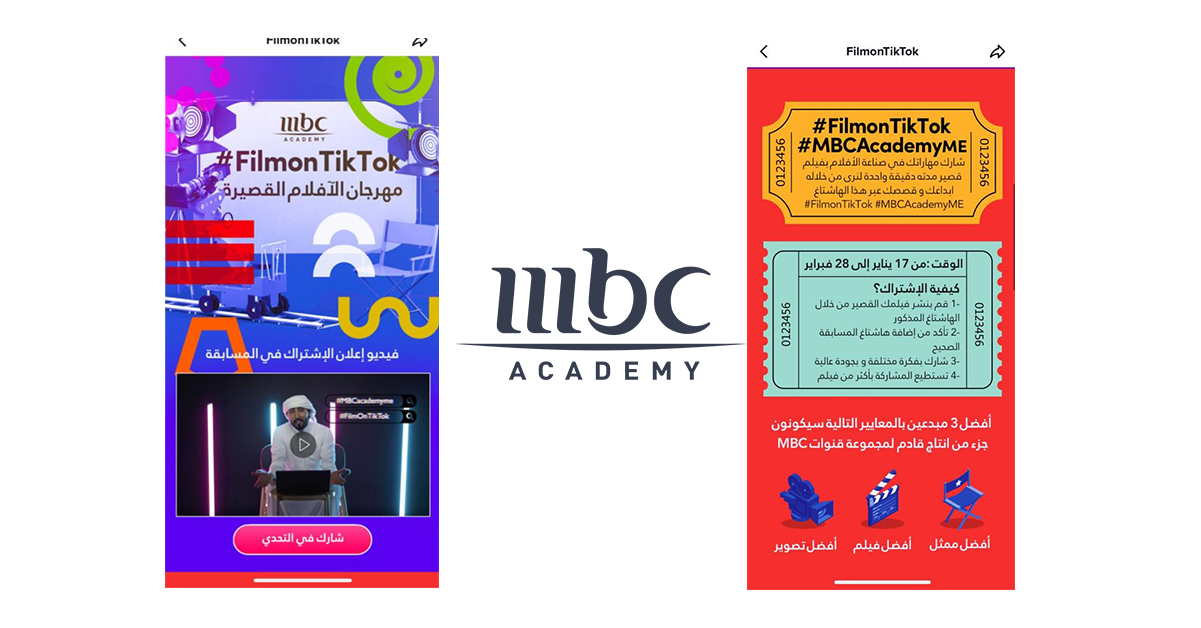 In line with its commitment to empower creativity, TikTok, the leading destination for short-form mobile video today announced the launch of its first filming competition enabling budding filmmakers to showcase their skills through #FilmOnTikTok for the chance to work with one of the GCC’s top media production companies: MBC Group and Shahid.

To take part in the competition launched in collaboration with MBC ACADEMY, MBC GROUP’s educational and training arm dedicated to discover and develop new skills and prepare the next generation of content creators and talents to work in the media and entertainment industry, passionate filmmakers from the Middle East and North Africa will have to produce a 60 second original short film and publish it on TikTok using the hashtags #FilmOnTikTok and #MBCAcademyME.

Anyone interested in participating can submit one or more short movies as long as they have a TikTok account and use the correct hashtags while adhering to the TikTok community guidelines. Any video which violates the guidelines will be immediately removed.

The short films will be judged across three main categories: best film, best actor and best cinematography with ten users being shortlisted by content creators from the Tiktok’s Creators Academy. Participants will get nominated based on their originality, creativity, and high quality production of their short-film. MBC ACADEMY will then choose one winner across each category. These three winners will get the opportunity to train on an MBC upcoming production that will be featured later on all MBC platforms. In addition, they will get the chance to learn the practical aspect of filmmaking with a real production crew. The winners will be announced during a live event, hosted on the @MBCacademyME TikTok page, enabling millions of TikTok users to discover who has what it takes to be a passionate filmmaker.

“We’re excited to start off the new year with a filmmaking competition that really digs deep into creativity, enabling our growing pool of users in the MENA region to showcase their production and acting talent. TikTok is a platform for anyone looking to express themselves through our easy to use tools, and with this competition, we are offering yet another platform to discover the region’s top talents,” said Rami Zeidan, head of video and creative at TikTok MENA.

He added: “We’ve all been through an uncertain year and with the majority of filming events being cancelled or postponed, the #FilmOnTikTok competition will bring the industry together to celebrate the region’s most authentic, unique and creative content.”

Also commenting on the competition and sharing gratitude on the collaboration is executive director of MBC ACADEMY and MBC TALENT, Jana Yamani: “We are excited about our partnership with TikTok for this competition. We believe amazing talents have emerged on Tiktok, highlighting it is the platform to showcase creative talent. Our job is to offer these users a platform to take their abilities to the next level and help them tell their stories across the group and beyond. While we will only have 3 winners as part of this competition, we look forward to seeing what the UAE community has to offer and we might end up seeing many participants in future MBC projects as trainees or talents.”

TikTok is also hosting a series of live sessions during which experts from the filmmaking industry will be sharing their stories and providing film enthusiasts on TikTok with tips and tricks such as placing music within a film, how to shoot cinematic shots through the phone, and five main elements to create a good short film. Anyone can join these sessions on the TikTok platform – all sessions can be tracked here: