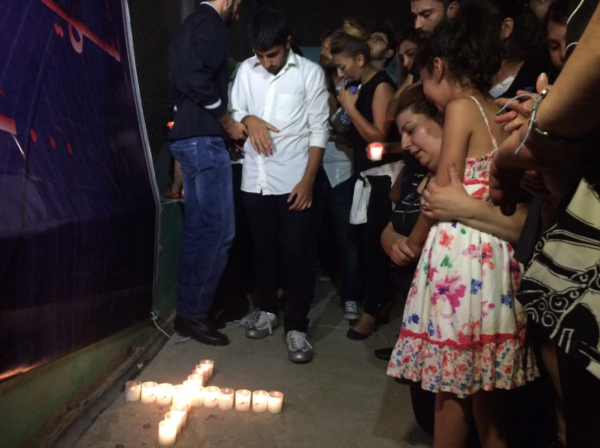 A brutal murder in Gemmayze has made plain the problems facing Lebanese society. Is it the responsibility of the advertising industry to act?

“It’s a much bigger issue than just crime,” says Ramzi Barakat, founder and chief creative officer at B, an ad agency based in Beirut. “It’s about awareness of the need for Lebanon to stand as one, to create a republic, to create a nation through the help of communication. Yes, that is what is greatly needed and I believe it could help tremendously, creating communication that communicates strong ideas. It is actually political communication that is needed.”

As all Lebanese will be aware, on 16 July Georges El-Rif was stabbed to death in broad daylight in Gemmayze, Beirut, following a road rage incident that shocked the country. It shocked because it took place in front of dozens of bystanders, was filmed from various angles on mobile phones, and revealed a culture of impunity that has been created by the failings of central government, the inadequate implementation of the rule of law, and the splintering of Lebanese society into warring tribes. The perpetrator, Tarek Yatim, was later apprehended and could face the death penalty, such is the level of anger fuelled not only by such blatant disregard for the law, but by a spate of murders that have highlighted the country’s lack of justice and accountability.

The murder of El-Rif was watched by the energy minister, Arthur Nazarian, from his balcony, while it emerged that a number of arrest warrants had previously been issued against Yatim, a bodyguard for SGBL Bank chairman Antoun Sehnaoui. Why wasn’t Yatim already in jail was one question asked by Elie Fares, writing on his blog A Separate State of Mind: “He wasn’t in jail because this country is not a country, but a jungle where animals like Tarek Yatim run wild, unafraid of retribution because we don’t have a functional justice system and we don’t have a functional security apparatus to make sure such assholes are where they’re supposed to be: behind bars, away from people who just want to make a living, drive to work, go home to their kids and families, and just live.”

Appalled by the murder and the descent of Lebanon into criminal chaos, those on social media stepped up to the plate, launching the #justiceforgeorges hashtag and an Indiegogo  campaign to seek justice for the crime and for El-Rif’s family. “For too long we have watched as the country falls apart and justice is withheld,” said Nadine Chahine on the campaign’s fundraising page. “This campaign is to raise funds for the family he has left behind, and if they wish it, to help cover legal expenses that might arise in the pursuit of justice. This is a chance to show the family that we support them in these difficult times, and that we will be one strong community. That we refuse the rule of the jungle and that the law is above all.”

Many of those outraged by the crime have been driven to action by a sense of guilt, with an LBC blog stating simply that by failing El-Rif the Lebanese had failed themselves.

In such circumstances, does the advertising industry have a responsibility to act? Should it do what it can to combat crime in Lebanon, using the power of communication to change society for the better? With a lack of will shown by central government, is it the role of others to step in? After all, advertising agencies are more than keen to carry out work for charities when it can benefit them in terms of awards, but where are they when they are needed the most?

“It’s the responsibility of every decent human being to act in light of such horrific, stupid, frightening, barbaric, unbelievable crime, not only that of the advertising industry,” says Rami Traboulsi, CEO of Beirut-based agency Joe Fish. “To unite, come together and help prevent this from happening again in the future. Social media, when used properly and smartly, can be very effective and can give voices to those who aren’t millionaires, who aren’t protected, who just want to survive in their lawless country and make sure that their children have a decent future.

“Look at what happened to the #JusticeforYves campaign seven months ago. If it weren’t for social media and the will and anger of an entire nation, the killer might have managed to get out of it somehow. Then again, these acts are always post event and don’t actually fight the real problems of our country which lead to this tragic event.”

He adds: “I can’t understand why two, three, four, five or even six people couldn’t come together, tackle him [Yatim] and make a citizen’s arrest. This is our basic problem in this country. We can’t and we don’t know how to work together to achieve any goal, in this case to save a man’s life. We just stand there at a relatively safe distance, comment, and watch. We are not united. We are divided.”

There are numerous case studies from around the world where agencies have acted, usually in conjunction with NGOs or similar organisations, to combat crime, social problems or factional disputes for the benefit of society as a whole. Perhaps the most famous is that of Bogota-based Lowe SSP3, which has been working with the Colombian government for several years to persuade fighters from groups such as the Revolutionary Armed Forces of Colombia, better known as FARC, to demobilise.

A lot of the work done in Colombia by Lowe has been inspirational for the rest of the world, with Jose Miguel Sokoloff, chairman of the global creative council at Lowe and Partners, stating that for social marketing to work the key is to believe in it passionately. “The secret to success is to do something that you really care about, that you passionately believe in,” said Sokoloff at the Dubai Lynx earlier this year. “It’s about understanding that problem and really trying to solve it, even if a lot of people are on it. This has to be about believing truly in what you are doing, not about doing things to look good by paying lip service. If you believe in conserving water, who cares how many people are doing it? Go ahead and do it. Let your passion come through.”

For Lebanon, the problem is far bigger than crime and a culture of lawlessness. It is about the fault lines running through society and an inability to unite.

“Lebanon is known for its creativity and savoir faire,” says Barakat. “What is upsetting is that it is a country torn between the will to reach for greatness and the silly or futile political forces that bring it down to become the worst example of a nation. Even though it is not all up to us, since every time we seem to be standing tall our presidents, thinkers, leaders and hence our aspirations are assassinated by evil forces of the world as if there is a plan to keep this country down. And this has worked. It is a shame. A country that was an example of a multi-cultural, multi-religious society living in harmony peaking in the early 70s, a country that saw a booming after-war economy, rising from its ashes like a Phoenix. A country that saw millions come down to the street to scream for liberty and freedom as one, a country that wants and can be an example to the world is always brought down to its knees by world evil as if it is forbidden for it to shine and become the proof that life in peace and harmony is possible.

“Lebanon desperately needs to use its know-how in communication to campaign for the belief in Lebanon as a united nation. I think ugly politics and sensational news are the ones that are taking the stage in the media and therefore have more share of voice in the nation’s conscience on a daily basis and therefore there are more forces that keep tearing us apart than the ideas that unite us. The creative challenge here would be to inspire a nation in always remembering that united we stand and divided we fall.”

Traboulsi agrees. “I have seen very clever ideas and campaigns from Lebanon that tried to tackle this subject, but is it actually making any difference? The problem is we never really see things through. We just come up with a nice idea, embellish it and demand an award for it. We never do it for the real reasons. We never put in the proper effort because we are a divided nation and we don’t have the proper support of the government.”

Traboulsi cites Leo Burnett Beirut’s work for Sakker el Dekkene as an example of an initiative that seems to be working, with the NGO fighting corruption, primarily by collecting reports of acts of bribery across public institutions in Lebanon. He says ‘seems’ because most similar campaigns, whether they are combatting corruption, against sectarianism, or uniting Lebanon, “are usually done with only shiny awards in mind”.

“They are never properly thought of, lack proper on-ground operation and co-ordination, lack proper budget, lack the proper government support and are never followed through. We just present the ideas, make a nice TVC or visual or activation, then try to win an award with a very detailed case study on how ‘effective’ it was. The reality is, they are not effective.”

He adds: “We have the talent, the know-how, and I know that we have the will. We just need to communicate, think, get organised and see our idea through. We need to #UniteLebanon.”