The ex-MEC chief's new venture, Radix, promises to be integrated, future-ready and customer-focused, and there are some principles the ex-MEC chief is carrying over from his journey so far 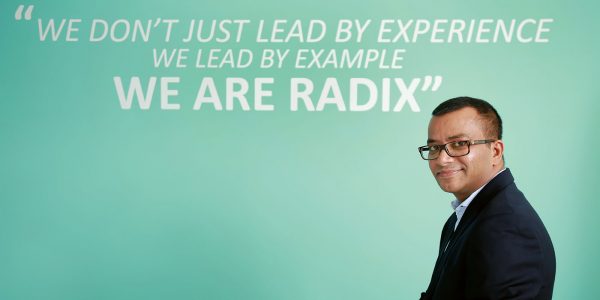 Mohan Nambiar’s Radix is starting to grow. Having established a foothold in Dubai, the agency (it’s much more than a mere media buying unit, but more on that later) is now expanding through partnerships and affiliations into Saudi Arabia, Egypt and, most recently, Oman.

The company has existed since the start of 2017, and Nambiar has been officially at the helm since January 1 of this year, but the time wasn’t right before to either move beyond Radix’s home turf or to talk the new venture up too much.

Apart from the local partner needed for any onshore venture in the UAE, Radix has no other owners or financing behind it other than from Nambiar himself. After he left Mediaedge CIA, which he had founded in the region and led for 25 years, Nambiar took a year off before coming back with Radix. (Holding group WPP has since renamed MEC as Wavemaker.) Although Nambiar insists he didn’t deliberately poach from his former workplace, several members of the Radix team approached him from MEC and have moved across.

Nambiar has had offers from investors and says he is keeping those conversations open, but was reluctant to take on even silent partners at first. He says he didn’t want to be beholden to earnings.

“I did not turn them down,” says Nambiar. “My focus is that I want to make sure that I build this right. … I am still very much in contact with them. I still share a great rapport and professional relationship with them. I respectfully regretted saying the time is not right.”

The reason is that he wouldn’t want to be rushed by outside investors expecting a quick return. “It’s going to take time – one year, two years, three years or whatever – so I don’t want to come under any pressure for revenue, saying that is the bottom line. I just want to make sure that my people on the floor are happy.”

He does not want his colleagues – he refuses to call them staff, a policy he has carried over from what he calls “my previous life” – to be focused on money. He says they should focus on their roles, not on targets.

And although he talks it down himself, there is evidently something about Nambiar that inspires loyalty. Many staff have followed him, and he says that although he left MEC with “zero expectations”, he received calls from clients offering moral – and eventually practical and commercial – support. One former MEC staffer, now with neither WPP nor Radix, recently told Campaign: “If Mohan came to the MEC building and whistled, the offices would empty.”

“When you come from being a regional CEO of MENA, and come down to ground zero, I left that place with zero expectations of people,” says Nambiar. “But I was so pleasantly surprised when people called me. Media owners called me, my ex-clients called me, my friends called me. It was so nice.”

Even so, he says he didn’t take advantage of people when they called. Again, integrity is part of Nambiar’s reputation and a reason that he was able to hold on to business longer than most other media agency heads.

“One of the key reasons I managed to hold all this business for a number of years in my previous life is because I was very transparent and honest about it,” he says.

He later adds: “I don’t have anyone who doesn’t smile at me in the street. I didn’t create any nonsense with people.”

Radix’s clients include Nestle, Phillips, Noor Bank, National Bank of Oman and Landmark Group. Nambiar says he is finally getting to know the agency leaders he once competed with, as he is no longer vying with internationals for their key accounts. The agency is also providing media services to local creative agencies, including Tamra C2, Amber and Watermelon.

Although it deals in media, and media is Nambiar’s field of expertise, Radix is not a media agency. Nambiar is hesitant to put a clear label on it, and objects to the need to. It provides “solutions”, which can stretch across creative, marketing, media and more in the post-silo marketing world that has evolved in the past five years or so.

Being a small operation – Radix’s Dubai office employs about
30 people – the company can be both nimble and integrated, attributes that have proved a challenge for traditional holding-company media agencies.

“If you look at a holding company, you are just part of a holding company,” he says of network agencies. “When you are told to practise certain disciplines, you overstep if you try to do things that are not part of your agenda. Then, within holding companies you create conflict because you are stepping on someone else’s toes.”

He says that he tried to offer solutions outside of media planning and buying in his previous life, but “there are so many issues and problems that you create” with trying to provide PR, creative services, digital and content, until “you don’t know what you are doing”.

Holding companies “are now starting to talk the language of being agile, being lean,” he says. But while Radix can provide an integrated approach, Nambiar “could not have provided it as part of a holding company, unless you create a unit within”.

That approach is becoming more common among international groups. Omnicom, for example, has a best-of agency that handles McDonald’s in the US, and WPP’s Global Team Blue was handling Ford until it lost a chunk of the business recently.

Nambiar says the problems with such units are: “How many will you create? And what happens to your parents?” That is, the agencies within the group that have contributed staff and resources to the client-specific unit. “What is going to be the essence of the organisation?” he asks.

Integration and flexibility are becoming essential now the old model of high margins is over. “In this part of the world, everyone complains about not doing well,” he says. “But why isn’t anyone saying that over the last 25 years you did good in so many of those years?”

Although he points out that the region’s rulers are still making significant investments in the economy, he’s not saying the squeeze is short-term. “We all have to accept the fact that margins are not necessarily going to be the same as we were operating with. Margins are down, and there is no way they are going to go back up. You have to realise and accept the fact that this is now how it is.”

But Nambiar enjoys a challenge. “The comfort zone is not there any more,” he says. “You are struggling, but that struggle holds, from my point of view, a better enjoyment than the comfort zone that you operated within before.”

It means all the business and revenue that comes in – to Radix and to any other agency – has been hard-earned, rather than being easily won.

Nambiar often hires promising but inexperienced young staff, giving them their first breaks and instilling the loyalty that drives them to work hard for him. And he has two pieces of advice for them. The first is to recognise that others will soon be in their shoes. “Always look down, because if you do not recognise where you come from you are in trouble,” he says.

The destination might be targets and financial goals, but Nambiar is focusing on the work that makes up the Radix journey. If he takes care of the means, the end will take care of itself, and his new journey will reach a successful destination.