A year into her role, Ogilvy's regional CEO explains why she's putting social media at the heart of the 'refounded' agency's offering, and offers some advice on pitching

It is Ogilvy’s 70th anniversary worldwide when Campaign visits the agency’s Dubai office to meet Patou Nuytemans. The walls are decorated with great international ads from the past seven decades, and the regional CEO is just a couple of days past her one-year anniversary in the job. She gives Campaign a 70th birthday cookie and tells us a new managing director, Philippe Berthelot, has arrived to take over the day-to-day running of the Dubai office so Nuytemans can start concentrating more on the wider region.

At an international level, Ogilvy is losing its sub-agency handles including Ogilvy One and Ogilvy PR, and becoming ‘re-founded’ as just Ogilvy Worldwide. That desiloing is taking place in the region as well, and Nuytemans is focusing on five core values: client-centricity; modern marketing; customer engagement and digital; creativity; and becoming “the best place to work”.

The re-founding is part of the client-centricity principle. As with many other agencies, Ogilvy is trying to simplify the interaction its clients need, giving them one agency that can do more, yet bill for fewer services

As well as being MENA CEO, Nuytemans is also EMEA chief digital officer and executive partner worldwide of Ogilvy, and social media is an area of expertise. She calls it “the new mass advertising”, and adds that it also fulfils a role as “the new customer relationship marketing”.

She adds: “I wanted that to be at the heart of the agency because I knew that strategically and creatively what we needed to do needed to look different.”

Under Nuytemans, Ogilvy Worldwide has been building its social capability for five years now. She says it is down to creative agencies to handle social content well, despite the ‘media’ nomenclature. “This is one of the disadvantages of the gap between media agencies and creative agencies,” she says. “If you do not embrace the understanding of the medium and everything it can do – and certainly in an advanced medium like that, which comes in many formats and with many data possibilities – if you don’t bring that in-house, people can’t strategise and create for it.”

Social media has two key strengths: targeting and what Ogilvy nomenclature calls ‘sequential storytelling’, says Nuytemans: “Basically, you know if people are engaging with your piece of content and then you can retarget them”.

Previously, marketers would build their brand using above-the-line media, then use activations and other below-the-line strategies to convert customers. Social media brings these two sides of marketing together.

Another reason that social media should fall to ad agencies such as Ogilvy is that the notion of organic reach has now become anachronistic.

“We should move away from – and this is very prevalent in this market; there is still a lot of talk about it – organic reach, and likes, comments and shares. So much research has proven that it doesn’t have brand or business impact. That is absolutely outdated.”

She admits there are indications marketers can glean from these metrics, “just as in focus groups”, such as what people like and don’t like.

But, she says, “The real power of social media is its power to build brands and actually drive business impacts, sales, leads, sign-ups for events and so on. It’s a true modern advertising medium.” 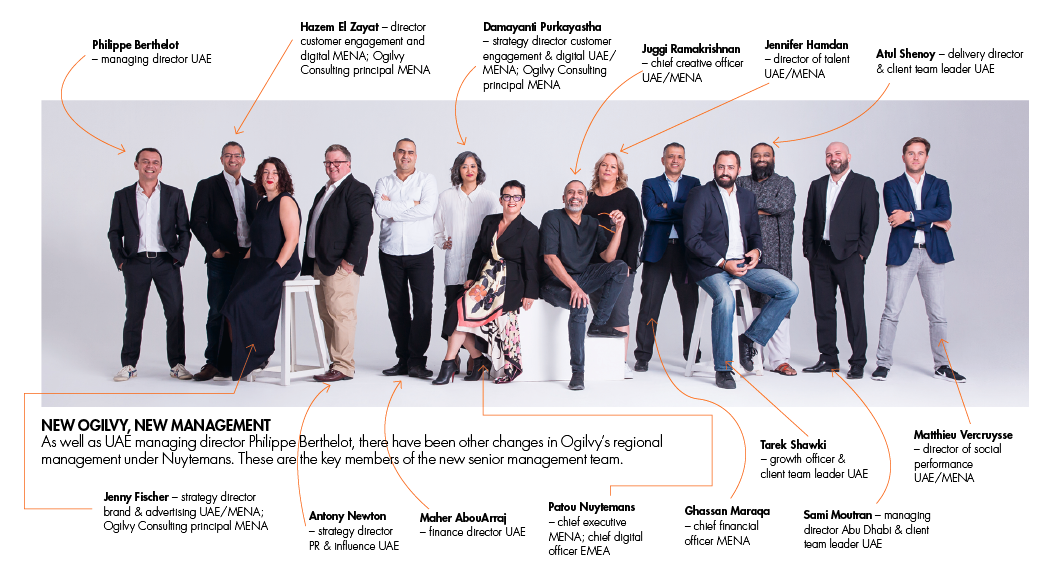 Another thing Nuytemans has noticed from her first year in the region is how much agencies are asked to pitch. Not that this is unique to the Middle East, but it is perhaps more prevalent here than in other markets. Nuytemans says of brands that “pitches is just what they do”. Procurement tends to drive the process, which means “it’s not about anything, and everything gets pitched”. This makes for short periods of intense work for the agencies invited to take part – a guest list that is often long.

Nutytemans admits that lots of pitches means “a lot of opportunity”, but also says it hurts agencies when marketers call for submissions as though the process were free. “If [an agency] does too many of them and you don’t convert enough of them, it ultimately hurts our people,” she says.

One of Nuytemans’ key concerns is picking which pitches to go for. “We can’t afford to participate in many and do a half-hearted job and actually not win,” she says. “Because it hurts our business significantly.”

Clients who call pitches tend often look for the wrong things, she adds. “A pitch was always supposed to let [the client] get a feel of who you are and what you can do,” she explains. “It was never ultimately about actually finding the final answer.”

Pitches are artificially isolated, and the industry agrees, says Nuytemans, that “work will benefit when we can interact with our clients and talk and question and work together and collaborate, rather than do the pony trick of disappearing for three weeks and coming back and saying ‘tada!’. It doesn’t work like that any more.”

She has the following advice to clients looking to pitch:

1. Appreciate partnership and loyalty. “When you’ve worked with a partner agency for a while it’s not always going to be rosy, just as in any relationship. But you’ve invested so much in those people to get to know your brand and do to all the work and to learn how you work. So if things go bad and your natural inclination is to repitch the business, think again. Ask if you can’t work through the bump together with your friend and partner. Because getting over bad times often solidifies a relationship.”

2. Don’t use pitches as an excuse to get free work. “Do it to really get to know an agency, its way of working and its ability, to see if that agency fits with who you are. Don’t ask for the impossible, and don’t ask
for anything and everything in a super-short period of time, because by squeezing you are getting something out abnormally. That’s not how agencies normally work. It doesn’t mean they can’t work fast or do a lot, but it creates a fake environment rather than a realistic one.”

3. Procurement. “When there is a necessity for a three-year procurement review, do you really need a full pitch? If it is about financials, ask for financials. You don’t have to ask for all the work again.”

4. Respect and loyalty. “To summarise, just respect that an agency is just a bunch of people. Imagine if somebody came to you and asked you every week for a bunch of free work. It’s unsustainable, so to be honest if you can help us out by being a bit more loyal, asking for things that are a genuine test of the agency, not for a total strategy or the exact answer. You won’t get that because it’s a fake kind of environment. You can help us elevate the burden a little bit.”

She ends, though, by admitting: “We love pitching, to be honest. Agencies love that, everybody in agencies loves it. But if it can be done within the boundaries of reason that would be a great thing.”

Under her watch Ogilvy plans to win more. It will put social media capabilities at the centre of what it does, and move beyond its 70th year refounded and reinvigorated.