JWT Beirut has partnered with Fathallah Films in Lebanon for the red carpet premiere and the MENA launch of Kahlil Gibran’s The Prophet.

Produced by Salma Hayek-Pinault and directed by Roger Allers, the film’s world premiere in Beirut will be launched through a multi-channel integrated campaign centralised around the main theme of Gibran’s book – the spirit of humanity. It is the first time Lebanon has ever hosted the world premiere of any film.

The premiere’s red carpet event will be held on 27 April at Cinemacity in the Beirut Souks, with the film to be released publicly in Lebanese cinemas on 30 April. Emmy award-winning actor Hayek-Pinault, who lends her voice to the character of Kamila and is of Lebanese origin, will attend the red carpet event together with other Hollywood A-list stars, the film’s director, and the film’s music composer, Gabriel Yared.

Communication assets for the launch have been created by JWT Beirut using selected stills from the film as a starting point. The team’s poster for the film, which focuses on the character of the little girl Almitra, inspired the direction for the communication assets.

Gibran’s The Prophet was published in 1923 and has been translated into more than 40 languages and sold over a 100 million copies worldwide. 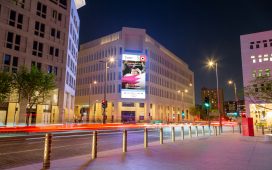