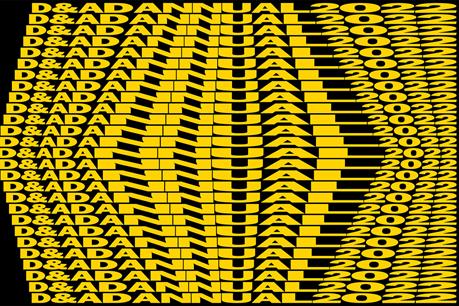 Being asked to write a review about the 60th D&AD annual (yes, 60th) has rekindled a romance.

Most creatives will have some kind of affinity to “The Book”.

I’ve been proud to be in it, been disappointed not to get in it.

Moved them from old agency to new agency, or old home to new home, they are bloody heavy.

The old books are now nestled in a corner of my loft… I think.

But mainly, what I really remember is poring over them for inspiration for hours and hours.

Then over the past five or so years I’ve fallen out of love with The Annual.

I don’t really know why, maybe due to being too busy? Covid?  I’ve just not made the time to engage with The Annual properly.

A light snorkel through, rather than the deeper dive of old.

Being asked to write this review, however, has made me fall back in love with The D&AD Annual.

Over the past two years (from issue 58), the D&AD Annual has been an online resource free to all – as a global celebration of creativity – this particular “feature” still feels the most important. Our continuous focus on breaking down barriers to entry in the creative industries is well-served by making such incredible work ever more accessible. Since 2020 it’s been pored over by 130,000 people, if my desktop research is right. It feels great that this is arguably the most shared creative experience we have.

More importantly, since moving online the content has naturally expanded: no more is it just the awarded work itself. The 59th and 60th Annuals have a series of “behind the work” interviews with the teams (not just the creatives) that have created some of the winners. It’s a section well worth paying a visit to, it serves to remind us that creativity is a team sport. Clients, filmmakers, producers, animators, VFX artists, editors and beyond all taking an initial concept and helping make them “Pencil worthy”.

The 60th Annual also has a new section that ranks individuals and companies’ performance, which, to be honest, I’m not sure about. There are no strategists, account teams, project managers mentioned here. This feels incongruous to the spirit and direction of The Annual and the industry as a whole in my opinion. LinkedIn fodder for some, but maybe a feeling of being left out for others.

The Annual itself is designed for the third year running by Dutch designers Studio Dumbar/Dept.

You’re welcomed into The Annual by waves of kinetic typography… the Dutch love their typography and so do I. A very simply laid-out site invites discovery, meaning for me I stumbled on work I may not have seen or flicked over a few years ago.

I’d already reminded myself of the sheer power and emotion behind Leo Burnett Chicago’s “Lost class”. Deservedly winning a whole gamut of Pencils, two black Pencils among them.

Doja Cat’s first ever codable music video by Mojo Supermarket to encourage women to code is mind-blowingly brilliant, again received a lot of awards but some of them should have been yellow rather than graphite in my opinion.

On to a couple of the gems I hadn’t seen: the beautiful design work for Rio Carnival by Tatil Design, stunning, reminding me of some of the best-in-class identity work for the Olympics over the years.

And The Lil Jif project from PSOne taking a cultural truth around a rap style (“mumble rap”) and turning it into something hilarious with Jif Peanut Butter and the rap talent Ludacris and Gunna.

Another feature I loved is that the new format allows you to absorb the judges’ favourite winners.  But also curate your own edit of the work to share or save – a new way to recreate the heavily bookmarked copies I carted around when I was starting out in the industry.

Importantly, there are also some thought leadership articles on the cultural context behind some of the award-winning work. Which is a snapshot of the global mood in which the work was created –
as they say context is everything and it helps to remind us of the backdrop this work shines against.

Dara Lynch, chief operating officer at D&AD, said: “In the wake of political and social turmoil, creative excellence continues to not only survive but thrive, as evidenced by the incredible talent we’ve seen at this year’s D&AD Awards.”