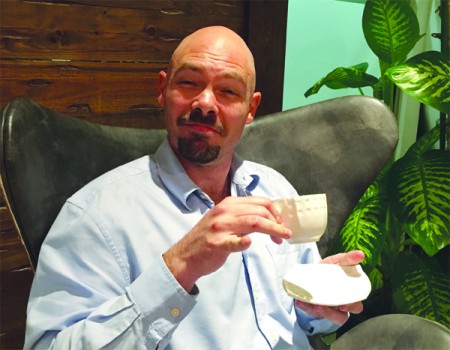 The Memac Ogilvy & Mather CSO argues that safe approaches to advertising are putting off audiences.

You know the urban myth of the frog in the pot of water? The one where if you turn the heat up quickly, the frog will jump out as he feels the water getting hotter, but if you turn it up slowly, he’ll not notice the difference and will allow himself to be boiled to death? Turns out it actually works. Some science type people who now find themselves permanently stricken from the SPCA’s Christmas card list tried it out for themselves. The frog was far more sensitive to the increases in heat than they had originally anticipated, but by turning the heat up slowly enough, it actually happened. French restaurants the world over are now investing in live frog display cabinets so they can sell them like lobsters; pick your own and we’ll boil it fresh. Adventurous diners will have accept that their meal will take a little longer than normal though, or be prepared to watch hapless chefs chase lukewarm frogs around the restaurant. Maybe that’ll be part of the experience?

As inhumane as that experiment was, it’s very similar to how we often treat our audiences in this region. We’re petrified that if we show them something new and fresh, something that they’ve never seen before and really makes them sit up and think, that they’ll jump out of the pot and escape to the comfortable familiarity of their lily pad. Instead, we prefer to show them something that’s very similar to what they’ve already seen and if it’s different in any way, is so minutely different that they won’t really notice. We call it ‘babysteps,’ or ‘safe.’

The only difference is that thankfully, unlike the frog, our audiences won’t die as a result of this treatment. Or will they? If we keep showing people the same things that worked previously, that we know they’re familiar and comfortable with, how long will it be before they simply tune us out altogether? It’s not as though advertising is the most important part of their lives to begin with. For most, it’s something that ranks quite high on their list of expendables, right up alongside ebola and indicating while changing lanes. An audience that can’t be bothered to pay attention to what we’re saying might as well be dead to us. Then what will we do?

Last year we developed a campaign for a client that illustrated this quite well. We presented a range of potential scenarios for the campaign, ranging from the ‘safe’ to the extreme. Two were eventually chosen – the safest one, and one that was right in the middle of safe and extreme. Both routes were then researched, both pre and post campaign. In the pre campaign research, where the full force of misrepresentative Guantanamo Bay style quantitative research was unleashed to make sure that the scripts wouldn’t result in another Arab Spring, the safest route tested the best. Respondents had seen this kind of scenario before, they were familiar with it, they had all experienced it themselves to some degree; all the stuff that makes clients breathe easier. But in the post campaign research, where we took it a bit easier and just wanted to know whether people had liked it, it tested the worst. Why? For the same reasons. They felt they’d seen it before. It wasn’t showing them anything new. We felt it was, but it turns out it did so in such a small quantity that they couldn’t detect the increase in heat. The midway route tested far better in the more relaxed post campaign research for the same reason. They thought it was new, unexpected and fresh, and it excited them.

Often we are hesitant to make the kind of dramatic leaps in our advertising that our instincts tell us we should, because we’re scared of turning some people off our brand. We’re human, and we don’t want anyone to not like us. It’s natural. But in order to get some people to love us, we have to risk some people hating us as well. Trying to please everybody will result in pleasing nobody. Aesop figured it out in 600BC when he wrote his fable about the miller, his son and their donkey – why has our region not cottoned on yet? In his book, “Truth, Lies and Advertising,” Jon Steel says he’d rather have three people love his ad, three people hate it and four people who can’t decide than 10 people who think it’s nice. Turning the heat up a bit quicker may result in more frogs jumping about the place, but isn’t that better than simmering them into a stupor?