See all of this year's Grand Prix-winning campaigns 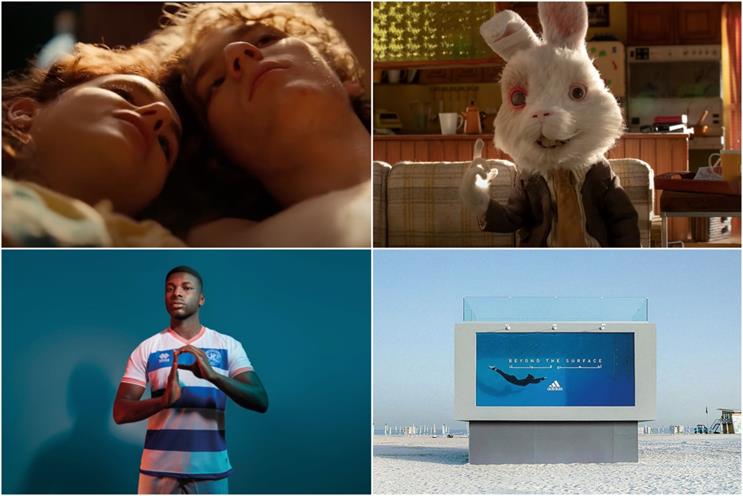 Cannes Lions 2022 proved that creativity’s spark could not be extinguished, despite the world emerging uncertainly from a pandemic.

This year’s Grand Prix winners plunged into a diverse range of topics, from Wingstop’s response to the chicken wing shortage with a chaotic rebrand to “Thighstop” to a day in the life of a talking rabbit calling for a ban on animal testing in “Save Ralph”.

Politics, health and wellbeing, sustainability, race and gender equity also featured. Check out video case studies for every winner below.

Brand Experience and Activation, Radio and Audio, Social and Influencer

This unofficial guide took people on a journey through the controversial British Museum and offered information about 10 of its items through an interactive mobile site and podcast series. Those taking the tour were encouraged to use Instagram filters to scan the artefacts while it was narrated by people from the countries they were taken from.

A system powered by artificial intelligence was developed for architects to create custom colour palettes unique to the individual’s vision. Users are able to describe the colour they’re envisioning out loud by referencing specific memories, things that inspire them or just general vibes.

Piñatex is a sustainable, vegan alternative to leather made from pineapple leaves grown by farmers in the Philippines. The campaign was a call to action aimed at the fashion industry to start using Piñatex as a more eco-friendly alternative with brands such as Nike already using it in its products.

With 83% of women in Mexico not having access to credit history, millions are unable to study or start a business because their loan applications are rejected. WeCapital’s financial services centre Data Tienda was created to recover the credit history of Mexican women from neighbourhood businesses’ accounting records, making it possible for low-income women to access credit from banks.

The chicken wing restaurant’s rebrand from Wingstop to Thighstop was a response to a chicken wing shortage in the US. Wingstop made light of the devastation and decided to market all things thigh instead with content featuring rapper Rick Ross.

Only about 1% of farmland in the US is organic. It takes three years for a conventional farm to turn organic, which is quite the obstacle for farming as a business, when this transition isn’t guaranteed to have a buyer by the end of it. Michelob Ultra’s “Contract for change” encouraged US farmers to switch their land over to organic by promising to be their first organic customer once the transition was complete.

Decathlon “The Breakaway: the first eCycling team for prisoners” by BBDO Belgium

The publisher released a book on the 50-year anniversary of Portugal’s Carnation Revolution, which marked the end of the nation’s fascist government. The book took inspiration from the blue pencil, which was used to censor artists under the regime. Otherwise a symbol of repression, the blue pencil is used in this book to create illustrations and poetry by blacking out parts of the constitution.

By using a phone to capture 3D, high-resolution imagery of Ukrainian artefacts, this tool was created to help preserve Ukraine’s landmarks and monuments in the midst of the Russian invasion.

Coinbase kept it simple during this year’s Super Bowl. Reminiscent of the classic computer game Pong or the bouncing DVD screensaver, the ad showed a floating QR code on the screen, which gleaned 20 million visitors to the site during its 60-second run-time.

The political music video focused on Latin America’s struggles for peace and justice. Powerful imagery deconstructs America as we know it, taking symbols like the Statue of Liberty and replacing it with an indigenous person, shining a light on imperialism.

The app provides a platform for athletes that have periods, allowing users to tailor their workouts to their menstrual cycles.

Penny “The wish” by Iconoclast Berlin

A moving short film pays homage to the lost experiences of today’s youth due to the lockdowns, restrictions and challenges brought about by the pandemic.

The campaign for the Tokyo 2020 Paralympic Games captured the lives of Paralympians from an unconventional perspective. A three-minute film shows the sacrifices the athletes have to make in their everyday lives to reach their goals.

Apple “Escape from the office”

The nine-minute extended ad was the third instalment of the “Apple at work” series, which sees a squad of geeks – aka “The underdogs” – trying to climb the corporate ladder. It was created in-house in collaboration with Mark Molloy at Smuggler. With the help of some Apple products, the team quit their jobs to take a business venture off the ground.

This animation was shot in the style of a documentary, following the life of Ralph the rabbit, voiced by Taika Waititi, in his job as an animal tester. It called for a ban on animal testing for cosmetic products by illustrating some gruesome realities.

The campaign combined a hip-hop music video, app and story book to expose the dangers of overconsumption of sugar and how it hides under the names of unrecognisable scientific terminology, while also highlighting the issues of racial and health equity.

To help fight mosquito-related diseases, “The killer pack” is a biodegradable packaging that houses a coil, which is a popular technique for killing mosquitoes inside people’s homes. The packaging also kills mosquitoes when disposed of, helping to reduce the spread of these diseases outside of the home.

Using a reef restoration system, Sheba spelt out the word “Hope” in the ocean. The stunt was done to highlight the danger of losing the world’s coral reefs and how it’s not too late to restore the ones that remain.

Suncorp Group “One house to save many” by Leo Burnett Sydney

With so many homes being destroyed by extreme weather conditions, this campaign highlights how new materials and innovative engineering can help protect future homes from floods and fires.

This campaign and the technology behind it highlighted how standard cameras have failed to capture darker skin tones. The ad starred the voice of musician Lizzo and illustrated the power of Google’s “Real tone” to make people feel truly seen.

Who said a billboard actually has to be a billboard? Adidas said: “Why can’t it be a swimming pool instead?” The installation was placed on a beach in Dubai and invited women for a swim as a way of smashing the barriers surrounding women and swimming due to cultural sensitivities.

I Will Always Be Me is a first-of-its-kind book for people living with motor neurone disease (MND), banking their voices as they read aloud.

When public officials in Lebanon suggested there was not enough paper and ink to print ballots for an election, An-Nahar chose not to go to press as a way of calling out this weak excuse. As a result of the newspaper “donating” the resources that were supposedly preventing change, the government stopped using it as an excuse.

The campaign aimed to tackle taboos around periods in India, worsened by the lack of education surrounding the topic. The National Council of Education failed to print a chapter about the biology of menstruation so Whisper produced “The missing chapter” to prevent teenagers from dropping out of school when their periods start.

“Long live the Prince” paid tribute to 15-year-old football prodigy Kiyan Prince, who was fatally stabbed, by reimagining him as an adult player in the Fifa 21 game. All proceeds raised by the campaign go directly to the Kiyan Prince Foundation.

A version of this article first appeared on Campaign UK