Agreement may last only six months but Omnicom agencies stand to gain from priority access to data and insights. 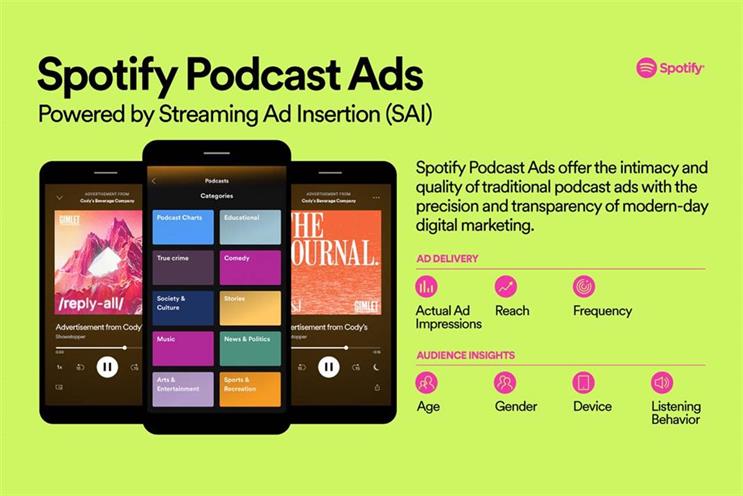 Earlier this month, much of the world’s media breathlessly reported that Omnicom had struck a $20m with Spotify in a “global strategic podcast advertising partnership”.

The companies’ joint announcement was fairly light on detail, but such is the excitement around podcasts as a growing advertiser platform that it has caught the attention of the industry and the stock market. Shares in Spotify jumped 3.5% after the deal was announced on 8 July.

For Omnicom, $20m is not a large amount – its media buying group manages about $35bn in global spend – but for Spotify it’s a landmark move that helps strengthen its push to become the world’s pre-eminent podcast media company, having already become a music-streaming duopoly alongside Apple Music.

The podcast media market is increasingly competitve and Spotify recognises that it needs to invest to win. In May, Spotify spent $100m (£82m) on a multi-year deal to secure exclusive rights to the wildly popular Joe Rogan Experience podcast.

And the market is consolidating at a rapid pace as companies try to scale, particularly in the US, where Sirius XM moved to acquire Stitcher, Spotify bought Gimlet and Amazon is reportedly looking to go on a spending spree to bolster audiobook service Audible’s push into podcasts.

Through the partnership, clients of Omnicom Media Group agencies Hearts & Science, OMD and PHD will be given priority access to Spotify’s podcast adtech and data insights about its user base of more than 270 million monthly active users – more than half of whom use the service for free in return for consuming advertising.

In practice, the deal means Spotify will present its available slate of monetisable podcasts to OMG before making them available to other advertisers. Both sponsorships and addressable (targeted) ads are part of the agreement. It should also give brands the ability to target precisely at best-in-market prices.

“As Spotify creates, develops and licenses more podcast content made available for advertising, OMG clients will have the ability to purchase that inventory before it is shared with the broader marketplace,” Catherine Sullivan, chief investment officer at OMG North America, explained to Campaign.

Meanwhile, the $20m figure is calculated by how media investment is due to be spent on behalf of OMG clients. Spotify, in its announcement, said the deal would run through until the rest of this year, but neither OMG nor Spotify would comment on why the deal is running only for six months.

Nor is this a completely new relationship between Omnicom and Spotify. The two have had a “long-standing partnership for years”, Sullivan said, in which they have collaborated on developing advertising products, including research, education and data.

“This partnership is designed to focus solely on podcasting as it’s a growing area of consumer attention, advertiser interest and ripe for ad innovation,” she added.

In terms of the real value to advertisers beyond being first in the queue, the agreement signals a new approach to podcast advertising, according to Johan Boserup, global chief executive of investment at OMG.

Boserup told Campaign: “Historically, and on other platforms, podcast advertising has either been platform pre-rolls or messages ‘hardcoded’ into the podcast itself, where the host would read them out. Spotify has developed a dynamic ad insertion process that means we can now leverage programmatic delivery and data targeting in podcasts.

“We’re integrating the podcast product into our Omni platform so we can target seamlessly across different platforms and formats.”

Discussions around the deal started because both OMG and Spotify felt the podcast format was underutilised by agencies and advertisers, Boserup explained, adding: “Podcast listening continues to grow explosively, yet the advertising experience wasn’t scaled with it.”