A host of innovative campaigns have succeeded in driving business success and future revenues through digital technologies and media excellence. 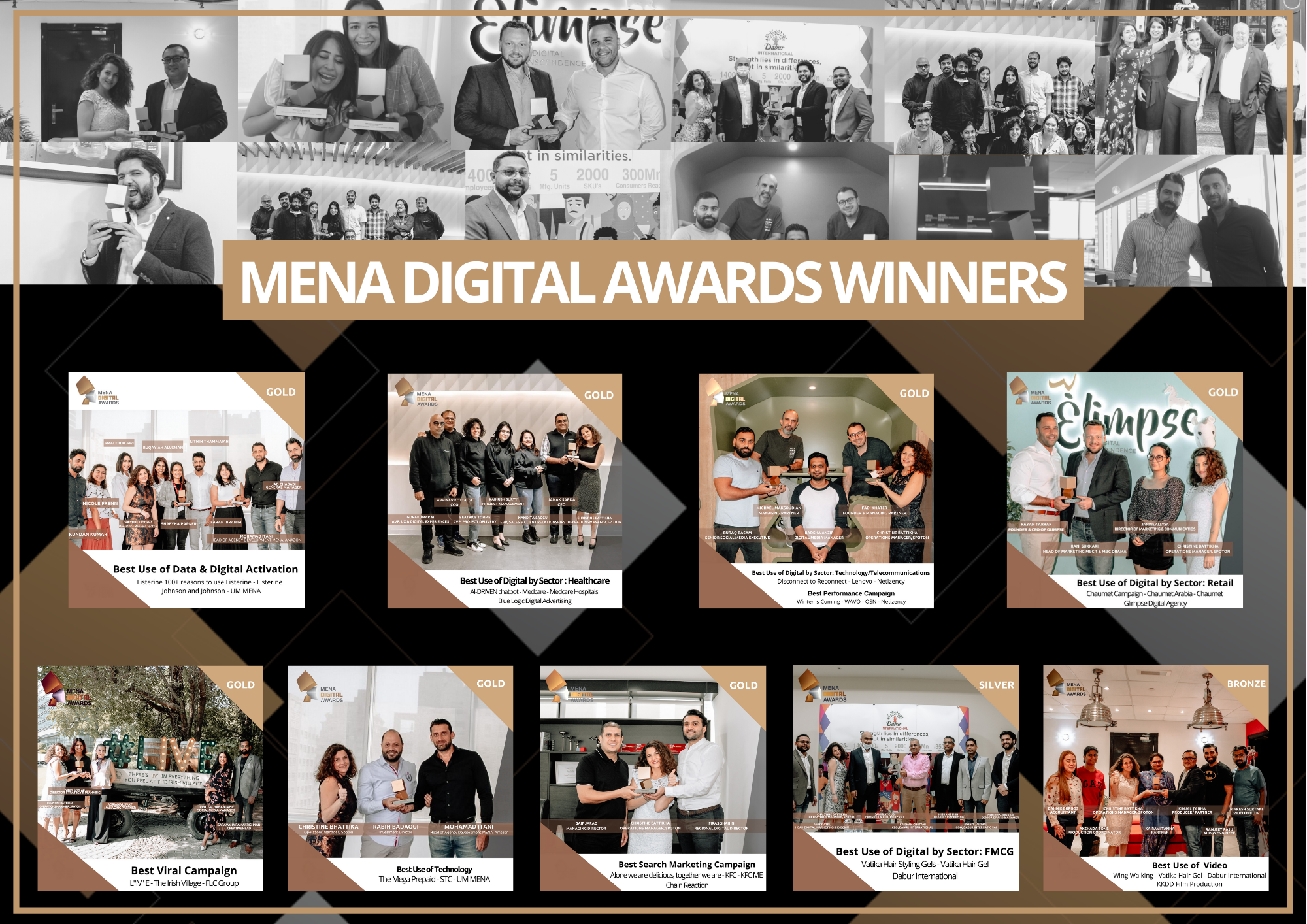 The MENA Digital Awards (MDA), a show dedicated to promoting the region’s brightest digital innovation and media projects since in caption in 2014, has honoured this year’s winners by highlighting the impact and success of their respective projects. The awards remain a unique platform showcasing the extensive efforts of organisation’s to help clients realise strategic objectives, build their profile, drive innovation, accelerate sector progression, and instigate economic growth. The MENA Digital Awards recognise excellence in the use of digital technologies and media, showcasing the success of brands whose actions are redefining the wider business theatre.

“Digital technologies have become increasingly central when ensuring businesses and their respective sectors break barriers and scale new heights in the future technology-driven landscape. Encouraging ongoing excellence by providing a platform for brands to highlight the impact of their collaborations is essential,” said Najla Semaan Mazboudi, MDA’s founder.

Despite the many challenges we have faced this year, everybody involved with our awards has demonstrated a passion to overcome adversity and bring business ideas to life. We are delighted with the response we received for this year’s edition. It is true that the enemy of creativity is the absence of limitation and we have been overwhelmed with the simply brilliant and engaging campaigns this year. Every entrant deserves tremendous credit for their efforts and we extend our congratulations to each category winner.”

There are seven categories for MDA and, as always, participation was open to all digital players across the region. This year’s edition welcomed 86 entries in total. The judging criteria has followed international standards since the first ceremony to ensure the very best work is considered. 2019 has been a hugely successful year for the winners and nominees in Performance, Mobile, Social Media, Digital Assets, Digital by Sector, Integrated, and Special.

Creative media agency UM MENA won the Best Use of Data award. The agency was recognised for its “100+ reasons to use Listerine” project, which was launched to overcome the millennial assumption that brushing teeth is sufficient enough to maintain oral care and hygiene. With over 100 assets using dynamic content creation, UM MENA reduced media expenditure and year-on-year (YOY) production by 50% for 93 more creatives, with an average view-through rate (VTR) of 50%. The end result yielded a 30% brand consideration increase, 53% purchase intent rise, and 8% more consumption.

For Best Performance Campaign, digital marketing agency Netizency scooped an award for its “Winter is Coming” project. The initiative revolved around local over-the-top (OTT) media services firm WAVO, which caters to the younger generation with thousands of movies and TV series. The objective was to promote WAVO’s service and increase daily subscribers by 1000%. A mass campaign covering Facebook, Instagram, Twitter, Snapchat, and Google was launched three days prior to Games of Thrones’ final season airing across the region, which was divided into awareness, engagement, and conversion phases. WAVO gained tens of thousands of new subscribers within 40 days – over 1,500 daily – with a cost per action (CPA) of less than USD 6 per subscriber. Overall, Netizency surpassed its set key performance indicator (KPI) target by 10 times and achieved a daily subscriber increase of more than 20 times.

Ooredoo Kuwait won the Best Mobile/Tablet Application award for the success of its ‘My Ooredoo App Kuwait’ project. As part of the brand’s digital enhancement strategy to support the country’s digital transformation plan and New Kuwait 2035 vision, Ooredoo introduced, via the My Ooredoo application, ANA service, Ooredoo Surprises, and Digital Service Subscriptions to help empower a growing population of young, digitally savvy customers with the latest technology.

Leo Burnett was named the Best Use of Mobile winner. The automotive marketplace has been experiencing instability and General Motors asked Leo Burnett to tighten up their business model. Its “Yukon – Driven by context” campaign combined creativity and innovation to increase the use of General Motors’ navigation platform and reach out to audiences – leading to a partnership with WAZE. Within four weeks, this resulted in reaching 117,000 unique users, engaging with 10,700 people, completing 33 digital sales instead of the targeted 18, and achieving 135% of reach KPIs, 181% of click-through rate (CTR) KPI’s, and 178% of customer relationship management (CRM) KPIs.

Netizency scooped its second MDA 2020 award, this time for the Best Use of Social Media on a small budget of USD 20,000. The agency’s “Olivia Gets Hired” project on behalf of Liv., a digital-only bank in the UAE, succeed in finding a sustainable way to bridge a servicing gap and quickly respond to customers. Netizency launched a bot so staff could work on more complex issues. The agency introduced customers to five shortlisted chatbots, who voted for their favourite. “Olivia” was hired and subsequently went live on the bank’s app. Since April 2019, Olivia has become a huge hit with the millennial audience, helping over 70,000 unique customers and responding in a record-breaking 0.3 seconds. Not only that, but there was also a 60% drop in chats and messages to human agents while responses became three times faster.

The award for Best Use of Social Media on a medium budget between USD 20,001-100,000 was awarded to FP7 / RUH for the agency’s “Be a Man” campaign. Prostate cancer has been increasing in KSA, and FP7 / RUH launched a teaser campaign asking people which traits mostly define a man such as a moustache, muscles, charms or looks. This sparked conservation surrounding the topic and ultimately led to the establishment of a landing page. What was once a taboo subject become the talk of KSA, driving 14,000,000 views, 300.000 landing page visits, more than 300,000 clicks, and a 120% increase in tests compared to the previous year.

Magna Global won the Best Use of Video award for its “There’s living, then there’s Madinat Jumeirah Living” project. With Dubai’s real estate category on a decline, Dubai Properties needed a remarkable campaign to attract high-net-worth property shoppers. Magna Global realized that high-net-worth individuals see no value in having the best if others also have it – so the agency took them away from Downtown via a video campaign. Besides being the most-watched piece of real estate content ever, generated leads increased by 62% within three months instead of the targeted six-month timeframe and unit sales increased by 35% in the same period.

Marketing services agency FLC Group rounded off the Social Media category winners with its Best Viral Campaign in collaboration with The Irish Village. The L “IV” E project emphasised to everybody that ‘IV’ is in everything – vibe, divine, jovial, alive, active, revive. The campaign resulted in over 6.2 million impressions, 3.1 million reach, and an increase in engagement of more than 47%.

Marketing and technology agency Digitas UK won the Best Web Platform award for its “Saudi Aramco: an extraordinary storytelling platform” project on behalf of the global leader and producer of energy and chemicals. The saudiaramco.com website redesign was a fantastic opportunity for Saudi Aramco to tell their story to a worldwide audience better. Digitas UK was tasked with meeting several objectives, driving creativity and innovation, and successfully executing the project to connect all audiences. The agency oversaw a 32% increase in engagement in average time spent on the page. This indicates that users are finding content more engaging and that the site has become more appealing, and users are navigating it with ease. Furthermore, the extended page time suggests that there has been an increment in interest which therefore helps the brand in a broader sense.

Like Digital DMCC won the Best Mobile App award. On behalf of MUSE by Chalhoub Group, the agency created a programme dedicated to collecting and redeeming points for a discount. The challenge was to reach the luxury consumer and offer them an unparalleled experience within 10 months – and Like Digital DMCC developed a Loyalty Experience Design to guide the strategy and tactics of the app and a comprehensive data capture strategy. With over 75,000 sign-ups in the first three months, the result was an app-driven membership scheme that offers an exceptional, engaging customer experience. MUSE is now capturing 40% more sales and delighting consumers via the experiences proposition.

The Best Use of Technology award went to UM MENAT for its “The Mega Prepaid” campaign. The objective was to make Saudi telecom company STC’s sawa prepaid packages standout amongst Gen Z during Ramadan. UM MENAT launched a rebranding campaign across social platforms that were geared towards the target audience, with a refreshed look and feel by producing a hero video featuring various themes depicting the energy of the Saudi youth. A Twitter campaign was also launched. On Twitter, the number of link clicks recorded reached 128,000, YouTube received 93.8% visibility, and the campaign reached seven million people on Instagram. Two million impressions were also delivered on search with a click-through-rate (CTR) of 31.14% and search impressions share reached 80%.

Best Use of Digital by Sector

Glimpse Digital Agency won the Best Use of Digital by Sector Retail award following the successful “Chaumet Campaign.” Chaumet Arabia was aiming to become the largest and most influential Jewelry social media community with localized Middle Eastern content, and Glimpse Digital Agency created a strategy, localized pages separate from the international page, and achieved results that organically matched or exceeded those of competitors. Moreover, the agency created distinguishable content in the shape of promotional videos, photoshoots, and artworks, and helped to build relationships and tie-ups with the biggest and most influential figures on Instagram through a holistic approach.

Marketing agency Merkle won the Best Use of Digital by Sector FMCG award for spearheading the “The perfect match” campaign for Kellog’s. With mobile consumption levels rising, the challenge was that more people have been spending time of their own and losing touch with the best moments in life – those shared together. Football is one area particularly affected, as many tend to watch alone on their mobiles rather than with others. Merkle created a web series featuring short videos showing that significantly higher engagement and spend leans towards short-form snackable content. The three-week campaign increased quarterly sales by 14%, leaving no Pringles, a Kellog’s brand’ on several shop shelves across all four target markets.

Blue Logic Digital Advertising was recognised with the Best Use of Digital by Sector Healthcare for its ‘AI-DRIVEN’ chatbot for Medcare. The company was asked to develop a conversational artificial intelligence (AI) agent to simplify and automate their appointment booking process. The end result was the provision of three live healthcare bots – with more currently maturing. Within six months, Medcare’s clients have seen tremendous results, including 24/7 presence across multiple customer support channels, increased call centre efficiency, and more than 8,000 transactions in six months.

The awards for Best Integrated Digital Campaign and Best Integrated Media Campaign both went to FP7 / RUH, with the agency’s “Be a Man” prostate campaign recognised across multiple categories.

Creative media agency UM MENA was another winner in multiple categories with the Digital Activation award in the Special category for its Listerine project. The Digital Cause Marketing award went to FP7 / RUH for the agency’s “Be a Man” prostate campaign.