To celebrate the return of the big screen, Motivate Val Morgan has picked 10 of the best cinema ads in 2021 – in no particular order. 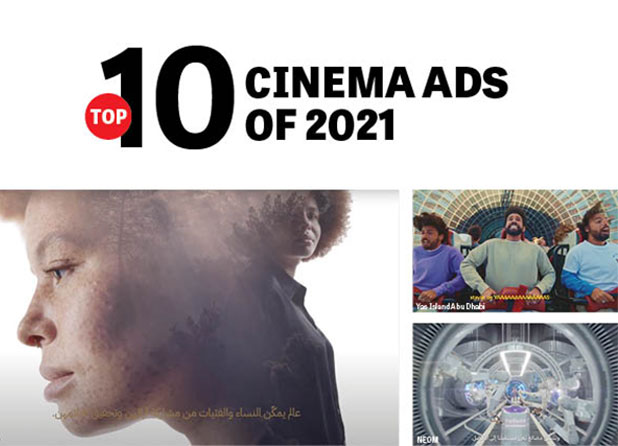 The pandemic shuttered cinemas in Q2 2020, followed by a staggering reopening between June and September with cinemas operating at 30-50 per cent capacity. Fast-forward to 2021, and cinemas are now fully operational across the region, with capacities ranging between 50-100 per cent.

A far more consistent and steady content pipeline holds optimism among cinemagoers, and brands too are back to believing in the unparalleled power and effectiveness of the medium. Cinema advertising representative (and Campaign sister brand) Motivate Val Morgan (MVM) has selected 10 blockbuster ads that have lit up the big screen so far during a year of recovery for cinemas.

“While cinemas across the GCC have already welcomed more than 25 million visitors in 2021, our resilience as a cinema advertising business is largely thanks to our management and a team that has unshakable belief in the power of cinema,” says MVM chief operating officer Avinash Udeshi.

He adds: “Choosing a Top 10 is always difficult as it boils down to numerous factors, including one’s personal emotion and state of mind, but we sure had fun re-watching every ad, back-to-back, on the cinema screen where every sense and emotion gets heightened. Cinema has always been the right medium to showcase commercials made in their full length, and though it is a genuine coincidence that many of the ads featured in our Top 10 have a longer run time, every single ad looks and sounds magnificent on the big screen. We hope you enjoy this selection, and a special thanks to all our returning and new advertisers for including us, cinema, in their media mix.”

MVM chose this ad because… cinema is great at driving conversations, and the narrative of this ad highlights a pertinent topic the Middle East is presently placing focus on: recognising the central role women have played throughout history, leading up to the present day.

The Women’s Pavilion campaign is very emotional, and Cartier through this campaign wishes to connect with a wider audience to spread its message, “When women thrive, humanity thrives,” and what is better than cinema to reach out to everyone in our region? With a penetration of 82 per cent in the UAE and 78 per cent in KSA (according to Global Web Index 2021), cinema was the best place to run this campaign.

MVM chose this ad because… some of the biggest ads in recent decades involve music, and while the creative itself is fun and retro, the catchy soundtrack – inspired by the Bee Gees’ classic ‘Stayin’ Alive’ – over a 7.1 surround sound speaker system in cinema makes this ad more impactful and memorable, one that makes those watching it definitely feel
the vibe.

With the positive recovery of cinema capacity post the Covid-19 restrictions, we selected cinema as one of the main channels for this campaign as we believed there’s no better way to have the content come to life than to see it on the big screen. Not to mention that moviegoers go to cinemas to have fun and enjoy themselves, and the ‘Stayin’ on Yas’ film will have them entertained.

Title: Our Culture is Our Future

MVM chose this ad because…this ad was aired in celebration of Saudi Arabia’s 91st National Day, and uses local footage covering various aspects of the Saudi culture, woven together to create an inspirational story of how the country’s heritage plays a huge role in sculpting its future.

Every Saudi brand has something to say on National Day, so the challenge was to stand out from the crowd. To do this, stc aimed to connect with the Saudi people on an emotional level, by creating a unique community activation campaign through different media channels for which cinema was considered as it’s one of the best platforms to showcase long-form content and narrate a story to audiences.

Title: Made to Change

MVM chose this ad because…of its production quality that was on par with big-budget movies. The ad’s narrative is absolutely on point for what this futuristic city aims to become.

This ‘Made to Change’ ad is a wonderful production, and the strong and compelling long video showcases the power of what NEOM is and will be for the future of cities. Following Covid-19 and lockdowns, cinemas in the UAE have gone back to the old habit of attracting people through the launch of multiple blockbusters. We knew that the new 007 and Eternals – from the Avengers series – were long awaited and that the footfall would be high. Cinema is a great medium to deliver such a high-quality production from NEOM with a highly focused audience. It almost feels like a short movie by itself for people daring to dream big.

MVM chose this ad because… it is bespoke cinematic content that encapsulates the true essence of cinema. The ad weaves a magical story centred around the Della Cavalleria bag, taking audiences back to medieval times through its beautifully crafted storytelling – similar to a movie trailer.

To celebrate the launch of the Hermès Della Cavalleria bag, and to follow on from the success of the Kelly films in 2019, Hermes created a new cinematic trailer as part of an integrated campaign, which was perfect to air in cinema.

MVM chose this ad because… it is unlike any other automobile ad – a unique animated visual masterpiece scripted to emphasise everything the Maybach has to offer: exclusivity, excellent comfort and ultimate luxury.

We found the perfect place to air our opulent film in the lavish VIP cinemas at premium locations across the UAE and KSA, where we could reach our exclusive clientele.

MVM chose this ad because… of its comedic take on digital prudence, a great example of a public awareness message delivered in a humorous manner.

We have a very important message to spread about online safety, and we wanted to tell that in a story format that people will remember. The cinema is the perfect venue to spread this message, as the number of people that go to the cinema is significant, and it reaches our target audience in an environment where they are more likely to be receptive. We’ve been very happy with the reactions we’ve been getting so far and see ourselves using cinema advertising in future campaigns.

MVM chose this ad because… of its great copy, suited to the times when the world went into isolation due to the pandemic. This ad reinforces that the world is better together, and what better place than cinema to experience the power of shared experiences?

The campaign was designed to target audiences of different ethnic backgrounds, which we achieved through playing different videos among foreign and international films in cinema.

MVM chose this ad because… it is absolutely over the top. Amazing use of colours, costumes and props, while the soundtrack is also catchy. It looks like the actors had too much fun filming this commercial.

Cinema was chosen because the song has proven to be extremely popular amongst the younger generation and the timing was just perfect because cinemas have reopened to the public in Kuwait.

MVM chose this ad because…the inspiring copy makes this an atypical automobile ad, where the spotlight is not on the vehicle being advertised. We liked the fact that the focus is on the hero of the story – the owner of the vehicle – and the lifestyle she lives with her sidekick, the Porsche Rapture Macan, always by her.

Porsche Centre Kuwait identified the Rapture brand and its owners as passionate local partners with aligned philosophies in the attention to detail and devotion for the craft. Such communities dream as big as their passion, with an aspiration to be the heroes of their own stories. Naturally, Porsche Macan’s personality fits with their accord; it is powerful, luxurious, trusted and tested. The reception of the concept was overwhelmingly positive and the sidekick concept was loved. It was then taken to cinema for a wider reach that taps into the younger generation, with a focus on the female entrepreneurial side. The move to cinema has solidified the message of the Macan being a reliable, everyday vehicle, with a flair of customisation packaged in unique local collaboration.