No, it's his sister. 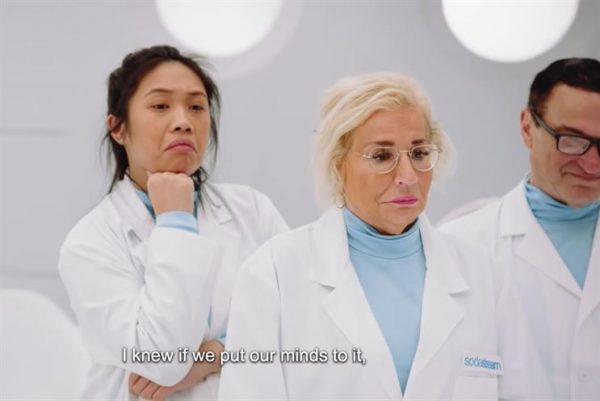 SodaStream has partnered Randi Zuckerberg, the sister of Facebook chief executive Mark Zuckerberg, to launch its 2021 Earth Day campaign, which urges people to transform their social media interactions into positive changes for the planet.

In the spot, called “Don’t just share, care”, Randi Zuckerberg makes a playful nod to her brother while stressing the importance of taking a stand and transforming social concern into real action.

The ad begins with a polar bear on a melting iceberg being assured by a man in a helicopter that “Sarah from New Jersey just shared your story, so everything is gonna be all right.”

Throughout the film, we see a series of people “liking” and “sharing” things on social media with their action having no repercussion at all in real life.

Randi Zuckerberg, who is two years older than Mark and worked as a Facebook executive from 2004 to 2011, appears in the ad in gifs and a SodaStream laboratory before delivering a Broadway-esque performance on saying no to single-use plastics.

The spot also introduces the brand’s sustainable community platform available at SodaStream.com, which encourages people to take action for the planet.

To support the campaign, SodaStream has released research findings showing that a third of people in the UK (30 per cent) are sick of others “green-washing” on social media, sharing posts about the environment when they know they don’t live sustainably themselves.

As part of its environmental promises, SodaStream has committed to saving the use of 78 billion single-use plastic bottles by 2025.

Last year Snoop Dogg appeared in the brand’s festive campaign “The small things”. The rapper interacted with an endangered turtle in a nod to SodaStream’s work to reduce the amount of single-use plastics.

The brand, now owned by PepsiCo, has created a series of combative ads over recent years promoting its agenda of discouraging the use of single-use plastics, including 2016’s “Shame of glory“, which parodied a famous sequence from Game of Thrones, and resulted in a legal dispute with the International Bottled Water Association.