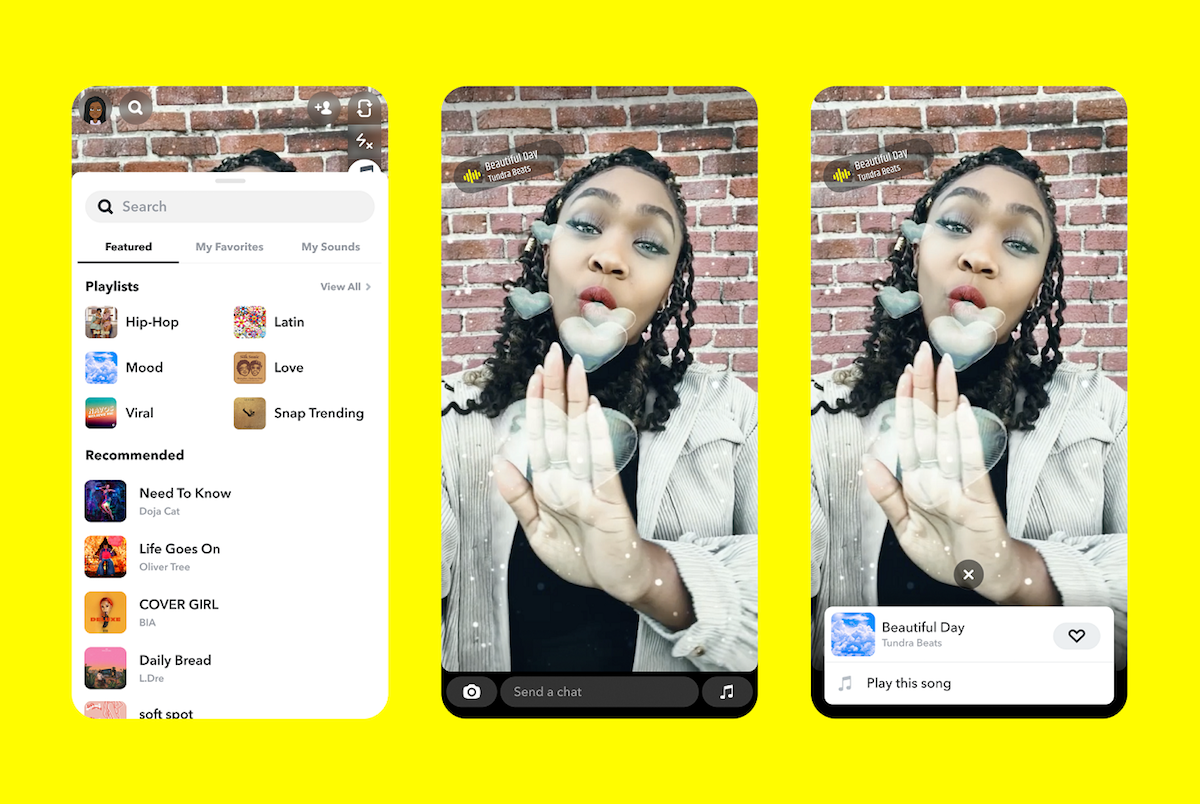 With the aim to transform the way Gen Z listens to and discovers new music, Snap Inc. has established a new partnership with Sony Music Entertainment to include their artists’ music into Snapchat’s Sounds library.

With over 200 million Snapchatters engaging with augmented reality every day, Snapchat is expanding the music experience on the app by adding Sounds into its AR Lenses available in the Lens Carousel and experimenting with new formats.

Rolling out soon, Sound Lenses will feature a pre-selected song embedded into the Lens, a Lens that transforms pictures of anyone to appear as if they are singing a song, and Cameo Sound Lenses that apply visual effects to put you and a friend as the stars of your own animated music video. To find Lenses with Sounds, look for Lenses that have a musical note icon on the Lens icon.

These new Sound Lenses will make for a more immersive music experience, and open a proven and powerful way for artists to share music on Snapchat.

Dennis Kooker, President, Global Digital Business, Sony Music Entertainment, said “We are pleased to be expanding our relationship with Snap to develop new commercial opportunities for our artists around short-form video and augmented reality experiences. Through this agreement, our artists have more ways to connect with fans and enhance engagement in their music by enabling their songs to be part of the Lens and Sounds tools that support communication and creative expression among Snapchat’s users.”

“Our new deal with Sony Music marks a major milestone as Snap now has partnerships with all the major labels, in addition to networks of independent labels and emerging artists,” said Ben Schwerin, Snap’s Senior Vice President of Content and Partnerships. “We’re excited to further integrate Sounds into our AR Lenses to provide artists a proven and powerful way to share their music, and create immersive new experiences for our community.”

Sony Music has leveraged Snap’s powerful AR capabilities over the past few years to share new music with Snapchatters around the globe, and those experiences have had incredible reach.  For example, Snap and Sony Music partnered on an AR Lens to support the launch of Kygo’s collaboration with Whitney Houston for her unreleased version of “Higher Love”. In three days, this limited release Lens resulted in over 16 million Snaps creations, and it received over 55 million views.

Snapchatters can learn more about the music received from a snap by swiping up. A “Play This Song” link will also open a web view to Linkfire so snapchatters can listen to the full song on their favourite streaming platform (Spotify, Apple Music and Amazon Music).