Impact BBDO wins the MENA region’s first Best Of Discipline Award at the One Show for print with the campaign “The New National Anthem Edition” for An Nahar Newspaper.

The One Club for Creativity, ahead of the upcoming Creative Week 2021, announced that Impact BBDO won the MENA region’s first-ever Best Of Discipline Award at the prestigious One Show. This Grand Prix accolade was given to “The New National Anthem Edition” campaign for An Nahar Newspaper.

“On the back of winning the first GP for the region at Cannes, this is another historic first for MENA. I really hope it’s the start of many more firsts. Regardless of the agency,” says Paul Shearer, CCO at Impact BBDO.

“The New National Anthem Edition” has met with a lot of success: the campaign was the biggest winner at Dubai Lynx this year, where it set a new record by winning 4 Grand Prix trophies. The highly impactful and effective work, in order to motivate women to lead the Lebanese revolution, rewrote the National Anthem of Lebanon by including the word “women” in it. 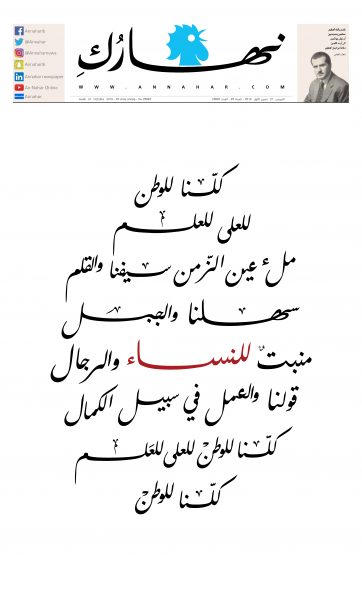 IMPACT BBDO has a history of setting the bar in the region: in 2019 it won MENA’s first-ever Grand Prix at Cannes Lions (also for An Nahar newspaper), followed by the region’s first-ever Best Of Discipline at the 2020 Art Director’s Club, also conducted by the One Club for Creativity. The agency is also the first and only Immortal Award winners outside of North America and Europe.

Other winners for Best of Discipline in The One Show 2021 are:

Creative Use Of Data And Digital Craft

Experiential & Immersive, Interactive & Online,
And Out Of Home

Ecox in collaboration with Wunderman Thompson Paris
for “Emergency Bikes”