Black Friday became a global, retail phenomenon almost 60 years ago in the US. It was originally a one-day bargain event held after Thanksgiving Day paving the way to the Christmas shopping season. In 2014, souq.com (which we now, of course, know as Amazon) was the first to import the concept to this region.

Today, Black Friday, as well as its eastern counterpart, Singles Day, has become the region’s biggest annual promotional season, extending from the 11th of November until the end of the month, and they are gaining momentum year-on-year with many more regional players such as Noon, ExtraStore, Jumia, Jarir, DesertKart, Hepsiburada, Trendyol, and others joining the fray over the last few years.

And because of how important this selling season is to both retail brands and the brands they stock, TikTok commissioned a study in November 2020 in partnership with IPSOS to understand the change in user behaviour and purchase habits in KSA during Black Friday in the context of TikTok users compared to other channels. 1,000 digital platform users were surveyed from November 12th till December 7th, 2020.

Shopping and product categories have witnessed a steady flow in 2020, and users expressed very similar interests towards the same categories as 2019. Those interests were translated into purchases, and not only did TikTok users end up spending more than what they had originally planned for but also 36% more than non-users. 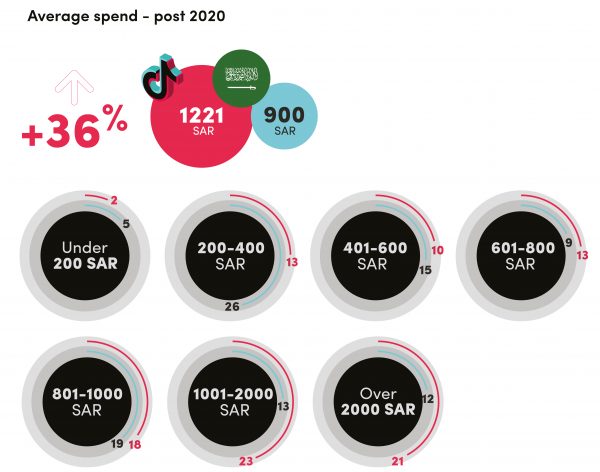 Mobiles, fashion, kitchen as well as other electronics and home appliances were the most purchased product categories during 2020’s sale, with TikTokers driving the increased market average for purchases for most of the categories. 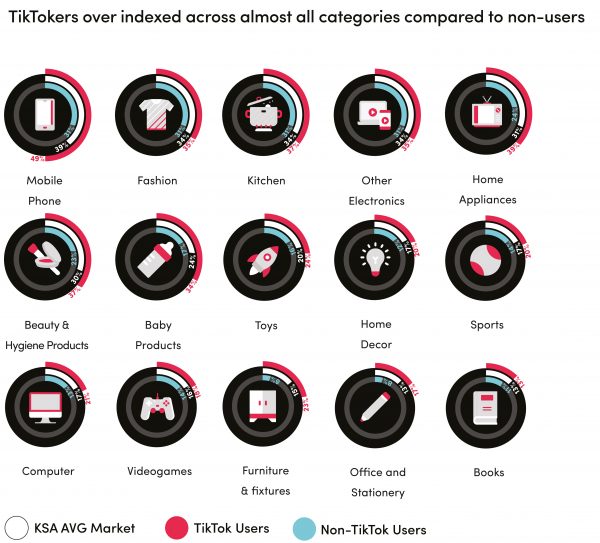 That being said, TikTokers are proven to be the right target audience:  44% are between 25 and 34 years old, 79% have a full-time job and 47% and 42% belong to high and mid-income householders respectively. In addition, TikTokers are savvier when it comes to searching for the right offers and deals across platforms. Online touchpoints have had the greatest impact and influence on their purchase decisions, as overall awareness via online channels was 100% amongst TikTokers. The platform itself witnessed an increase of 10% being a Black Friday source of awareness platform vs 2019, which indicates that TikTok has grown significantly as one of the touchpoints communicating Black Friday deals.

Content is king on TikTok. When TikTokers were asked about Black Friday content, close to 8 in 10 confirmed having watched related content by brands and creators, and almost 1 in 2 claimed to have created their own. The most popular content focused on Black Friday Sale were videos, product reviews and unboxing, as well as reviews, wishlists and brand offers.

In addition, TikTok For Business conducted brand lift studies across multiple brands including Namshi, Alshaya, Styli and NiceOne, and scores showed higher ad recognition compared to the market norm. The studies also focused on creative diagnostics, with over 50% of people concluding that the content was interesting, enjoyable, made them want to buy the brand, differentiated the brand from others, told them something new, and featured good music and memorable visuals. These recognitions allowed the brands to witness significant uplifts in their brand health and equity metrics.

TikTok’s storytelling canvas and content structure are designed to facilitate discovery – discoveries that Tiktokers actively seek – and Black Friday has proven to be a popular and exciting event amongst TikTokers in KSA. They look forward to it and are at the forefront of Black Friday shoppers. Thus, brands have massive opportunities here, from brand discovery on the platform to brand loyalty. TikTok is a place to build brand love via fully immersive, sound-on, full-screen videos served to people in a positive mood. And when that audience is in the moment, they act with purpose. Not just once, but across the various touchpoints in the consumer journey. 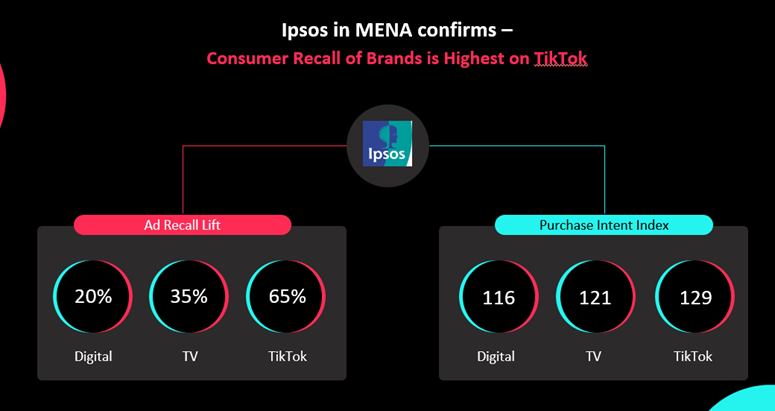