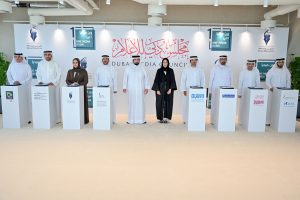 Under the directives and in the presence of His Highness Sheikh Ahmed bin Mohammed bin Rashid Al Maktoum, chairman of the Dubai Media Council, the Council today announced the launch of ‘One Media Dubai’, a one-stop-shop for Emirati, Arab and foreign media professionals and organisations to obtain a range of exclusive services in the emirate.

Launched in partnership with various government and semi-government entities in Dubai, the unique initiative streamlines the provision of services to media companies and professionals. His Highness directed the Dubai Press Club to lead the implementation of the initiative by facilitating access to services offered by the initiative’s partners.

HH Sheikh Ahmed bin Mohammed bin Rashid Al Maktoum said: “The launch of ‘One Media Dubai’ will add significant new value to the media community in Dubai and support efforts to realise the vision of His Highness Sheikh Mohammed bin Rashid Al Maktoum, Vice President and Prime Minister of the UAE and Ruler of Dubai, to reinforce the emirate’s status as a leading global media hub. The initiative will also further enhance the rich, supportive, growth-friendly environment that Dubai offers creatives, innovators and other professionals in the media industry. By providing a range of enabling services to media professionals, the initiative also contributes to Dubai’s vision to transform itself into the world’s best city to live and work.”

His Highness praised Dubai Press Club for its vital role in catalysing the growth of the UAE’s media industry over the last 20 years, through key initiatives including the Arab Media Forum and the Arab Journalism Award, which was renamed the Arab Media Award. DPC’s initiatives also played an instrumental part in the city being recognised as the Capital of Arab Media for 2020 and 2021 by the Arab Information Ministers Council.

The launch of the ‘One Media Dubai’ is aligned with the directives of the Chairman of the Dubai Media Council to support professionals working in local, regional and international media institutions. The initiative also complements the Dubai Press Club’s objectives to nurture the development of the media community in Dubai.

Her Excellency Mona Al Marri, Vice Chairperson and Managing Director of the Dubai Media Council, said: “The one-stop-shop for media professionals and organisations is part of the Dubai Media Council’s mandate to develop the sector further and foster an environment where professionals can excel. The initiative is also one of a series of strategic projects and programmes launched by the Club to support the media sector’s development locally, regionally, and internationally,”

Dr. Maitha Buhumaid, Director of the Dubai Press Club, said: “We are delighted to implement the ‘One Media Dubai’ initiative in collaboration with the initiative’s partners to facilitate access to a range of services for Emirati, Arab and foreign media professionals. The initiative seeks to enhance ease of doing business for local, regional, and international media organisations and create a unified window for media persons to obtain vital services that support their professional development and personal wellbeing.”

Dr. Buhumaid added: “The launch of ‘One Media Dubai’ supports Dubai Press Club’s objectives to accelerate the media sector’s sustainable growth and provide an ecosystem where media professionals can thrive. The launch is also in line with Dubai’s ambition to attract global talent and become a hub for creativity and innovation.”