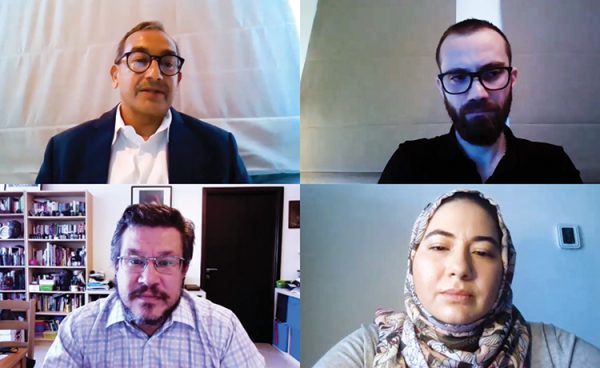 On May 18, Campaign hosted its first webinar, a first cousin to our popular Breakfast Briefings (but at a more civilised time, and you can wear what you want to attend). The topic was e-commerce.

E-commerce is one of the hottest topics today, important for a number of reasons including: during lockdown, consumers have been using e-commerce sites more and spending more on all sorts of things; for many retailers, e-commerce has been virtually their only source of income, their saviour in some cases; everyone with goods or services to sell is learning a lot about e-commerce fast; and media, marketing and advertising is central to all aspects of e-commerce.

I was joined on-screen by Mathieu Yarak (pictured, top right), digital research director at Choueiri Group; Nagham Akileh (bottom right), senior e-commerce director at OMD; and Shailen Shukla (top left), head of logistics at a leading UAE electronics retailer. The breadth of knowledge and experience these three brought to the virtual table meant we were able to cover a range of topics that moved from consumer data and predictions through marketing strategy for different sizes of business, and different verticals, to data integration and tech automation.

The best way to appreciate the topics is to revisit the webinar here. Below are some of the insights in quote form.

Nagham Akileh: In terms of consumer behaviour, what we saw at the beginning was people were starting to stock up essentials, and that’s where we saw spikes in personal hygiene … as well as things like consumer electronics for home office needs. It was very much about the essentials. But once the first two weeks subsided, what we actually saw was people shopping for long-tail items. Gaming increased by around 50 per cent. Furniture as well. Fashion retail has seen maybe not a huge increase like grocery (grocery has grown by about 88 per cent.) However, fashion retail has also grown and we’ve seen that e-commerce revenue contribution has gone from 5-10 per cent (which had been achieved over the past two or three years) to 20-25 per cent over the last two months.

Shailen Shukla: A lot of buying behaviour was based not on prices, which is normally the case in e-commerce. The consumer behaviour suddenly shifted, and the companies or the websites who were delivering faster were preferred. … Whoever was able to deliver even in two days, three days or five days was a clear winner.

Mathieu Yarak: At the beginning, when the whole situation started, there was a bit more of: ‘You can deliver fast, and I’m willing to pay for that’. But now, after things have settled down a bit, people have gone back back to the factors that they used to be influenced by to buy online. So now comes the price again.

Nagham Akileh: There was a surge in online traffic. You have a lot of people who are new to these platforms and are exploring them. It’s an opportunity to widen the funnel, and capture that new customer base to eventually convert them throughout the funnel.

Mathieu Yarak: We have lots of e-commerce players going on TV nowadays, in order for them to create that top-of-mind awareness level to increase the user base and then funnel it down. TV plays a dual role: it gives me that user base, that reach, but at the same time it can play a performance role.

Shailen Shukla: On an overall basis, there was a lot of data available, but
not enough analysis being done by all the ‘gurus’.

Shailen Shukla: No amount of advertising could have sold clothes and cosmetics in these times. We all need to reinvent ourselves.

Nagham Akileh: Just because you’re online and just because you have a website doesn’t necessarily mean that you have the back end in place to capture the right data.

Nagham Akileh: With the smaller players, there’s obviously an opportunity there. It’s about the right setup, and also understanding the circumstances.

Mathieu Yarak: Once we understand if people are willing to go back to shopping the traditional way, it could become a heavy burden on the e-commerce platforms to actually retain these people.

Nagham Akileh: If e-commerce is just something that companies are doing short-term to check off a box, it’s not going to work. They must use that as an opportunity to really change the way they do business, and also drive their marketing and maintain their marketing spends.