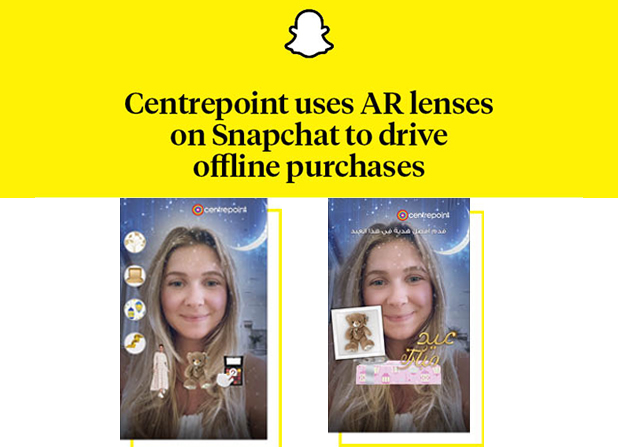 Centrepoint partnered up with Snapchat during Ramadan 2021 in order to convey a message of hope to their customers and emphasize the importance of reconnecting with their loved ones during the unusual times.

“Light Up Your Ramadan” Snapchat campaign celebrated the start of the holy month with a highly engaging and interactive augmented reality experience that went viral amongst Centrepoint’s consumers. The campaign also
had another exciting lens to celebrate the Eid gifting ritual showcasing the different gifting categories available at Centrepoint’s stores.

The results far exceeded Centrepoint’s expectation, where 7.7M1 Snapchatters were reached through both Lenses who engaged with them for an average of 19 seconds1. The campaign also drove a 13.8x1 offline ROI across Saudi Arabia, UAE and Kuwait with a 1,500x2 more consumer engagement generated than another platform throughout the campaign period.

“This campaign has driven more earned impressions than we have ever seen across any platform or campaign before and drove fantastic awareness. We have usually seen Snapchat Lenses as an add-on to a campaign rather than a core part of a campaign strategy. However, since seeing the success of this campaign, early indications are that augmented reality Lenses will become instrumental to campaigns of this size,” said Anda Dalati, Centrepoint.

Predictions 2023: The year ahead for digital agencies