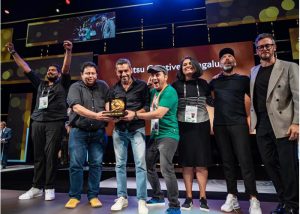 The coveted titles are based on the number of award wins over the course of the five-day festival.

Dentsu Creative Bengaluru picked up agency of the year after winning a Titanium, three Grands Prix, two Gold Lions and three Silvers for Vice Media’s “The Unfiltered History Tour” – an unofficial guide to the British Museum, which gives visitors an immersive tour of the museum’s disputed artefacts, their origins and how they were obtained.

It is the first time that an agency from India has won agency of the year and “The Unfiltered History Tour” broke another record as the most awarded campaign from India at Cannes Lions.

Previously known as Dentsu Webchutney, the agency rebranded as Dentsu Creative as part of a global move this week to consolidate all of Dentsu International’s creative agencies under a single brand to drive simplification and scale.

Fred Levron, global chief creative officer of Dentsu International, said: “The Unfiltered History Tour shows how a disruptive idea, accelerated by the power of technology and social media can change culture and help one of the most progressive media brands, Vice, empower the next generation and provide a balanced narrative.

“We could not be prouder of the work and the hugely talented team in India. This is our first Cannes Lions as Dentsu Creative and it has set the bar. Our thanks also go to Vice Media for their trust and belief. We are nothing without client partnership.”

Ogilvy, the WPP-owned creative network, won network of the year after amassing 88 Lions throughout the festival including one Titanium Lion, two Glass Lions for Change Golds, 23 Golds, 21 Silvers, and 43 Bronzes.

Ogilvy’s awards haul was another sign of the strength of India’s advertising sector as Ogilvy Mumbai won the Titanium for “Shah Rukh Khan-My-Ad” for Cadbury Celebrations, which used machine learning to put Bollywood star Shah Rukh Khan into thousands of ads for small, local stores affected by the pandemic.

Liz Taylor, global chief creative officer of Ogilvy, said: “We are thrilled that Ogilvy has been recognized as the world’s leading creative agency network because we believe that creativity is the great differentiator. Our teams earned this honour by producing work that upends the status quo, that alters the conversation, that creates meaningful change, and reshapes our industry.

“We are so proud that the work honoured spanned so many categories, countries, and clients. It is a powerful demonstration of what defines Ogilvy. It’s pervasive creativity. It’s borderless creativity. It’s creativity with impact.”

WPP won most creative company – what was once known as the holding company of the year award – ahead of Omnicom in second place and Interpublic in third.

Rob Reilly, global chief creative officer of WPP, said: “Creativity is the world’s most valuable asset. It has the potential to address the biggest challenges of our time in the most extreme circumstances. We have had to think differently for the last two years, and I feel this year’s Cannes Lions has been a celebration of innovation for our industry. So, I couldn’t be prouder to be part of this amazing global team of the most creative people in our industry.”

Mark Read, chief executive of WPP, said: “Creativity is the most important force in modern business. Being named the creative company of the year is testament to WPP’s power to help our clients succeed, and to the incredible talent of our 109,000 people around the world. Thank you to them and to our clients who entrust us with their brands.”

Simon Cook, chief executive of Cannes Lions, said at the end of the first in-person festival since 2019 before the pandemic: “Cannes Lions is a global platform, and it’s been an incredible week, as the global creative community reunited in Cannes once again.

“Our community came together from across the globe, and from every corner of the industry, to drive progress through creativity, for business, the planet, and society at large.

“I would like to congratulate everyone who entered, who made the shortlists and who won a Lion to set the benchmark for creative excellence on the global stage.”

The Election Edition campaign won a grand prix and silver in print and publishing, and  silver and bronze in outdoor. Havas Middle East’s campaign for Adidas won a Grand Prix, one gold, two silvers and one bronze in the outdoor category, and a silver in the media category. The agency also bagged a silver in the Entertainment Lion for Sports category.

Horizon FCB Dubai were awarded three silvers in media, digital craft, and creative commerce for its Breakchains with blockchains campaign. TBWA\RAAD and VMLY&R Commerce MENA picked up Silvers in the direct, and social and influencer categories respectively (the latter for #FeminineArabic for Twitter, with H&K Strategies). Keko Dubai pulled in a bronze lion in the film craft category for Porsche Middle East & Africa. The UAE goverment media office was awarded a bronze in the media category for it’s Warm Winter Livestream.

Special award, Regional Network of the Year for Europe, Middle East and Africa, was awarded to Publicis Worldwide.

Network of the year

Independent network of the year

Media network of the year

Agency of the year

Independent agency of the year

Independent network of the year

Creative brand of the year