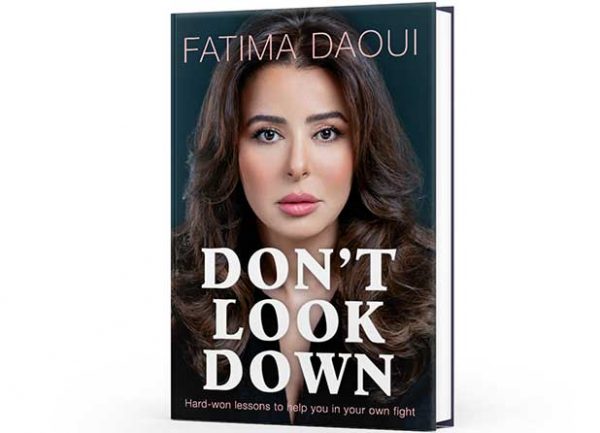 Al Arabiya News anchor Fatima Daoui is publishing a book about her career path. Daoui is a well recognisable face in the Middle East, but she didn’t make it to the top alone. Having been supported by women all her life, Fatima wants to help the next generation of female leaders in media, too.

With her new book, “Don’t Look Down”, published by Dubai-based conscious publishers, The Dreamwork Collective, Fatima shares her hard-won wisdom to help young women at the start of their career journey. Her fascinating life story unfolds in an autobiographical style, littered with anecdotes, wisdom and sage advice.

The easily digestible, autobiographical book is designed to help lift the next generation of female leaders in media, with the goal of helping them to win their own fight for a place at the top while staying true to themselves. But it’s also a good read, written by a highly experienced, well-respected journalist.

Fatima says: “I wrote ‘Don’t Look Down’ for the bold, unconventional, ambitious woman who wants a career she loves and is willing to roll up her sleeves and knuckle down to get there. I spent years fighting for what I have today and that fight was not for nothing. I‘ve reached heights I never dreamed possible, and now I’m here with this book to help you to do the same.”

The 202-page book is written in a matter-of-fact, friendly tone. Readers get the sense that Fatima is the “big sister” of media, helping the next generation of women pursue their passion with a book that is equal parts encouraging words of wisdom and hard-hitting reality checks.

As she says in the book’s prologue: “I believe that true change happens through actions rather than words. Especially for women, if we wish to make a difference in our society, we need to be willing to roll up our sleeves and get a little messy. This is my guide to help you in your fight, whatever it may be. For women, everything is a fight. Even now, I am fighting.

“We often have to work harder than men to succeed. My true desire for women in this world is for all of us to have a choice. If a woman dreams of staying at home and raising a family, then she should be able to do just that, and if she wants a high-flying career, her gender shouldn’t hold her back from having one.”

Fatima zooms in on the particular challenges women face such as age discrimination, stereotypes, and a lack of a proper support system. She explores how modern, ambitious women can remain true to themselves and their sense of femininity while still achieving their goals. She describes how women can set a new standard in business, by a relentless pursuit to be honest, hard-working and authentic.

“While my book may mostly appeal to female Arab readers in their early twenties to thirties, interested in pursuing a career in media, it also holds wide appeal for any woman pursuing career goals, and those entering into other less traditional career paths. And if there’s a girl at home watching a female anchor on TV and thinking that she wants to be like her, then this book is my gift to her,” says Daoui.

The book will be widely available from all good bookstores from 14th September, and via the publisher’s website, here.