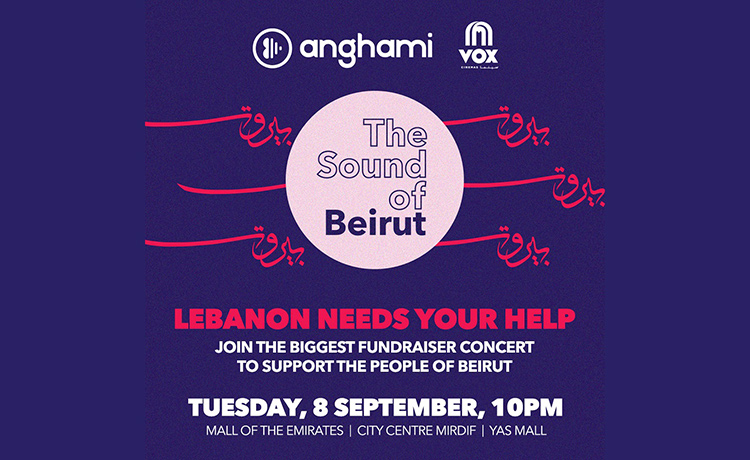 In support of the people of Lebanon, VOX Cinemas will stream The Sound of Beirut, a star-studded fundraiser concert at its cinemas in Mall of the Emirates, City Centre Mirdif and Yas Mall. Tickets for the charity event cost AED 50 and all proceeds will be donated to Global Aid for Lebanon in collaboration with the UN’s World Food Program, which is supporting those affected by the recent explosion in Beirut.

More than 30 international and Arabic artists will join forces in a two-hour global broadcast on the Anghami app and perform and send messages of support to Lebanon. The stellar line-up will feature Craig David, French Montana, Alan Walker, Latifa, Massari, Maya Diab and many more headliners.

Cameron Mitchell, Chief Executive Officer of Majid Al Futtaim Cinemas and Majid Al Futtaim Leisure & Entertainment said, “Music has the power to uplift and unite people and we are excited to collaborate with Anghami and Sony to support The Sound of Beirut. At Majid Al Futtaim, we are committed to standing with our friends and colleagues in Lebanon and we urge our guests to support this global benefit concert. Not only will you get to see a star-studded line-up but you’ll also be helping Global Aid for Lebanon, which is providing vital services and urgent relief to the thousands of people impacted by the devastating explosion in Beirut.”

Eddy Maroun, co-founder of Anghami added, “We are extremely grateful to VOX Cinemas for partnering with us to ensure that this benefit concert can reach as many people as possible and shed more light on this tragedy. Lebanon needs our help and The Sound of Beirut is a message of solidarity and support for the Lebanese people. Together, we can make a real difference and I hope as many people as possible will join us for this benefit concert and make The Sound of Beirut heard.”

As well as live streaming The Sound of Beirut, VOX Cinemas across UAE is also donating all proceeds from the screening of the Lebanese movie Yom eh Yom La2 to Emirates Red Crescent, which is providing urgent relief to the thousands of people impacted by the recent explosion in Beirut.

Tickets for The Sound of Beirut and Yom eh Yom La2 can be purchased online (voxcinemas.com) or on the VOX Cinemas app.