At Accenture Interactive’s Innovation Centre in the south of France, Austyn Allison discovers gadgets and future technologies galore are being prepared to help in marketing and other industries 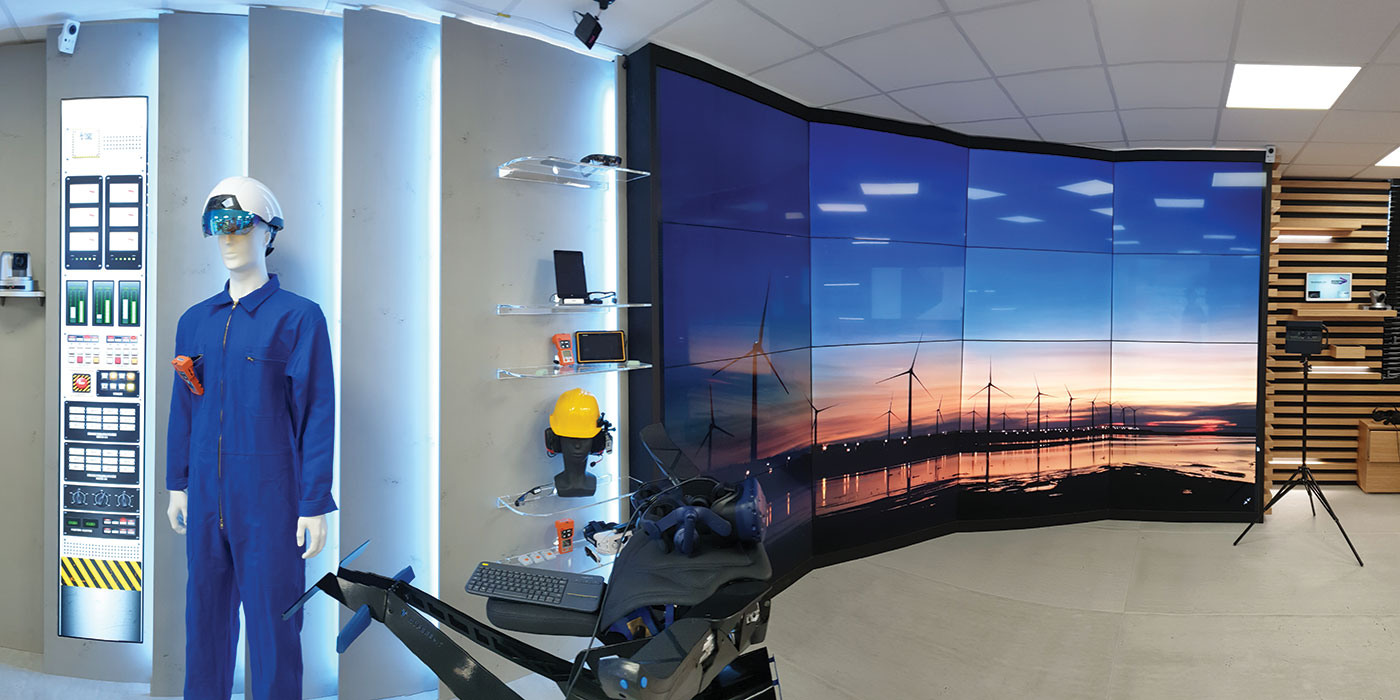 Have you watched the Stephen Spielberg film, Ready Player One, about a future when the whole world spends much of its time immersed in virtual reality? The producers must have given a lot of thought to how that would work.

In order to get the full VR experience the characters have to wear body suits to track their movements and vibrate when they touch, scrape, bump or interact with the virtual scenery. And they need an omnidirectional treadmill to allow them to run, walk, crawl or otherwise move around in virtual reality without literally bouncing off the walls in real life.

That technology is futuristic stuff.

Except it is already here. And you can see it in action at Accenture’s Innovation Hub in Sophia Antipolis in the south of France.

The offices are like a Bond villain lair for management outings. The hub functions as a combination of research lab and a place to show off all the toys and technologies the consultancy gets to play with and develop.

On the ground floor is the Accenture Interactive Innovation Centre. Accenture Interactive is the creative, media and marketing arm of Accenture. It’s the new model of agency that traditional agencies spend so much time not feeling threatened by. The centre is laid out around a central column, and divided in half to represent the left and right sides of the brain. The left side is dedicated to numbers and data, the right side to creativity and art. Within the ‘brain’ are modules representing a bedroom, an office and a living room. Other parts of the centre can be configured to become anything from a conference room to a nail spa.

It is telling that there is a ‘CMO office’ module. While the traditional marketing services holding groups might have similar labs (have you visited Geometry Dubai’s retail shop simulation?), many of those visiting will be chief marketing officers or their colleagues in the marketing department. Accenture Interactive, by dint of being part of massive professional services firm Accenture, is often talking to even-higher-ups. The CEOs, CIOs and CFOs visiting Accenture’s lab might need to be reminded of the challenges their marketing-department colleagues face.

The Innovation Centre opened in 2015, and is just one part of Accenture’s research and development programme, whose funding has grown from $643m in 2016 to $791m last year and continues to rise.

“We view innovation as a source of competitive advantage,” read Accenture’s most recent annual report. “We seek to generate early insights into how knowledge can be harnessed to create innovative business strategies and technology solutions.”

The Centre is somewhere for Accenture’s teams to experiment with new technologies. It is also a showcase for clients, and a training centre. Its location in the Cote d’Azur region makes sense too. It sits in the Sophia Antipolis technology park, which was envisaged as a French Silicon Valley when it was established in the 1970s, and is home to several international companies including Cisco Systems, Intel and Samsung. Talent from France, Europe and further afield is attracted by the weather, scenery and food as well.

Much of the technology that Accenture has on display dovetails neatly with themes from this year’s Cannes Lions festival, which took place only a short drive away. Gaming, voice technology and machine learning are all prominent.

Accenture’s teams at Sophia Antipolis monitor emerging trends and technologies with a three-to-five-year outlook, so much of the tech that is being developed will not become mainstream before 2022 or, most likely, a couple of years later.

Accenture’s teams spot trends, showcase them to clients and then, normally once they have a degree of client buy-in, develop them.

Currently one of the places Accenture looks to for future tech trends is China. Only seven or eight years ago, most technologists eyed China warily, seeing it as an economy that threatened to reverse-engineer what they had developed, in order to produce and market it more cheaply. But today China is a centre of innovation in itself. For example, mobile technologies pioneered by the likes of WeChat, Weibo and TikTok are trickling through to the West.

When Campaign visited the Innovation Centre, we were shown a number of technologies at different stages of development.

Virtual Catalog: Scan your face to an app, enter your body measurements and you can then browse clothes from a catalogue modelled by an online avatar of yourself. This allows customers to see how fashions will look on them, without having to visit a shop. The customer has a better idea of what he or she is ordering, and the retailer has fewer returns to handle.

Programmatic desk: In the CMO Office module of Accenture’s ‘brain’ is a display showing cities in the US. The media mix of digital ads for a real-estate agent is shown above each city, and is automatically adjusted by artificial intelligence depending on the response to those ads. Over time, each city will find its optimal media mix to maximise click-through, leads or sales.

Voice design: A brand’s voice – literally its voice; its accent, its tone and whether it is male or female – is becoming more important. From automated telephone prompts to responses on voice assistants such as Google Home or Amazon Alexa, brands need to speak to their customers. The normal way to do this is to go through a casting agency to find the voice-over artist who best fits the brand’s persona. But Accenture has reversed the process by feeding a lot of different voice samples into a system that can then blend them. Equaliser-style sliders can help you pick a voice that is female or male, melodic or flat, extrovert or introvert, friendly or formal, promotional or didactic, or anything in between.

AI heat mapping: The Accenture team shows us the component parts of a dummy ad for Cannes Lions: A background image, a cut-out photo of a Gold Lion, a Lions logo, a strap line and a ‘learn more’ button. They ask us to arrange the pieces so people viewing the ad will pay most attention to the logo and the button.

Once we have tried our best, a heat map checks the effectiveness of our design. Standard heat mapping of content uses eye-tracking software to find where people look first, what route their eyes take around a design and how long their attention dwells on each element. Accenture has built an AI version of this, which mimics human responses. So it is a virtual pair of eyes that appraises our attempt at selling the Lions. It informs us that our attempt scores 62 on an effectiveness scale of 0-100.

Next, the software designs the optimal layout itself. Each time it moves or resizes a component, even by a minuscule amount, it reassesses the heat map of virtual attention, constantly re-evaluating and fine-tuning. The final result isn’t as aesthetically pleasing as ours (we feebly argue), but is demonstrably more effective. (It places the button on top of that distracting Gold Lion. We’d not thought of layering elements.)

Alex Naressi, managing director of the Innovation Centre, is quick to insist that this software will not replace designers. A human must still design the components, set the parameters and sanity check the end result. But a lot of time-consuming fiddling can be done away with, and you can win those ‘make the logo bigger’ arguments with data.

Upstairs in the Centre, the technology is more geared towards the rest of Accenture, rather than Accenture Interactive. Here is technology catering to the oil and gas industry, transport, mining and other sectors where Accenture’s 459,000 employees operate across 52 countries.

This is where the Spielberg-esque VR kit lives.

The full body suit is useful for fire drills,. Rather than having to conduct real emergency practice on an oil rig, workers might learn the escape routes in the safety of a virtual environment, the suit vibrating if they touch a ‘hot’ surface while they navigate their way to safety.

Augmented and virtual reality technology can be used in simulations to learn to fix machinery, allowing engineers to work on virtual generators, for example, moving around them, removing parts and even looking inside their inner workings. We try a pair of holographic glasses that allow us to examine a jet engine, stripping back layers to see inside. We watch an Accenture employee perform maintenance on a robot, aided by diagnostics overlaid on reality through his headset.

Because much of the technology at the Labs is still under development, it doesn’t always work perfectly. When Shemsi Lhassani, who leads the resources innovation programme, explains that a lot of the voice technology is based on Amazon’s Alexa, the nearest Alexa unit hears it and squawks into life. And when another visitor brushes the hand of ‘Pepper’, a small robot, the android begins asking questions like a nosy child until a staff member clamps a hand over its face to virtually chloroform it.

But the technology isn’t ready to be released yet. That’s why it’s in a lab, being tested, rather than out in the real world. It’s still three to five years from becoming mainstream, and that’s the point. As Accenture fine tunes it to work as it should and to fit client needs, it will be rolled out to clients and the public.

For now, Sophia Antipolis is a great place to play, experiment, be inspired and catch a glimpse of what tomorrow holds.