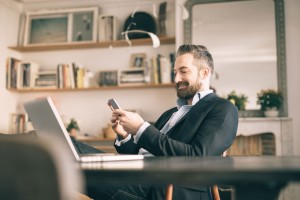 Dubai-based radio operator Arabian Radio Network will branch into telecoms ad-tech when it launches Unlockd in the UAE this week. Unlockd is an app that serves a static ad when a phone user unlocks his or her phone.

It has licensed the regional rights to the technology from the company’s Australian founders, who have already launched it in markets including the UK, the US and the Caribbean. The app will be launched in partnership with UAE telecoms provider Etisalat, and will initially be available for users of Android phones in the UAE.

The technology works by serving users static ads when they unlock their phones – something the average user does between 80 and 150 times a day. Users opt in and are rewarded with operator credit or discounts on their telephone bill of up to AED15 ($4) a month. Programmatic targeting will soon be available

Steve Smith, who stepped down last week as chief operating officer of ARN, emphasised three attractions of Unlockd: “It is premium,” he said. “The consumer has opted in, so that gives it a premium. The second thing is creatively it’s full-screen. It’s beautiful, so creatively there is a lovely angle there as well. And the most important thing is it’s before you get into your phone, before everything else.”

By serving an ad before the user reaches their web browser or social media apps, Unlockd could wrest some mobile ad spend away from the likes of Facebook and Google. ARN may also use it to promote its own content, but already, Smith said, “commercially we are having advanced discussions with major agencies and the appetite is very positive”.

ARN – which has traditionally only operated within the UAE – plans to roll out the technology to other markets within the Middle East. Smith would not say which markets would come next, but Etisalat has a footprint in both Saudi Arabia and Egypt, as well as several smaller markets in the region, so there is scope for expansion without having to find new telecoms supplier partners.

While the launch of Unlockd may allow ARN to expand beyond the UAE, it also allows it to flaunt its credentials beyond radio. “This will make it very clear that ARN is not just about radio any more,” said Smith. “It hasn’t been for some time, and I think this message will cut through.”