The country may be a small advertising market, but it is still a dynamic tech hub, writes Eyad Halabi, sales and marketing director of Seagulls

Jordan is a country that is heavily dependent on its domestic natural resources. It has been through challenges over the past years yet it undeniably has made a name for itself as a solid regional tech capital.

Jordan has an emerging economy that has faced diﬀerent challenges, mainly regional instability, scarcity of resources, debt problems and high unemployment.
Its population is estimated at 10 million, with a registered GDP of $40bn in 2017 and an estimated growth of 2 per cent in 2018, marginally lower than growth in 2017. GDP per capita is $8,400 and the minimum wage is $380 a month. The economic and political instability in the region aﬀected all sectors in Jordan, including media and communication, which used to be one of the major active sectors in Jordan for the longest time. It has changed the dynamic of the advertisers’ spend and put a strain on local clients’ budgets, since Jordan is one of the smaller advertising markets in the regions. 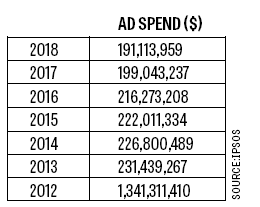 The table (left) shows ad spend (monitored traditional media investments) in Jordan for the last six years. Online spending is still not monitored in Jordan, but we expect it to represent 30 per cent of the total spend. The last four years have been diﬃcult across the region for diﬀerent reasons and most of the local and multinational brands have had big cuts by reducing their spend in major markets such as UAE and KSA and stopping it completely in secondary markets such as Jordan and Lebanon.
During the early years of the 2000s, 90 per cent of the communication budget was allocated for above-the line (ATL) and the remaining 10 per cent was for below-the-line (BTL) and brand activation. The majority of the ATL budget was allocated to newspapers, followed by OOH and radio as most of the brands, especially the international ones, were beneﬁting from the spillover of the regional TV stations such as MBC, LBC and MTV. This is not the case anymore, where most of the brands reduced their budgets and allocate only 60 per cent to ATL, with very little allocation on print and OOH. Radio and TV are maintaining the same percentage and almost 40 per cent (it used to be around 5-10 per cent in 2010-2012) of the advertising investments are allocated to online advertising mainly Facebook and Instagram). The above breakdown proves that the best mix nowadays is to have your digital campaign accompanied by outdoor and radio. This applies to both thematic/branding and tactical campaigns.

Major Advertisers
Top category spenders continue to be telecoms, mobile operators and the banking sector. Real estate, carbonated soft drinks (CSD) and FMCG categories’ spends on traditional media took a hit with brands opting to spend more on social campaigns focused on engagement. However, it is worth mentioning that the online spend is mostly social but that there is still a huge, untapped area of performance marketing that we are missing.

The Big Players
70 per cent of the total media investment is controlled by the top media booking units in Jordan: Starcom/Leo burnet; MEC/ Wavemaker/Mindshare; OMD and The Hub/Carat.

Account Shifts
The whole market has been shifting over the past ﬁve or six years with the introduction of diﬀerent online platforms such as social media and digital marketing tools. Big sectors such as CSD and FMCG disappeared from the traditional media front and new sectors such as banks and mobile devices have been introduced. Telecommunication companies stayed constant with more focus on online advertising due to budget constraints. Within the same context, it is worth mentioning that the majority of recent campaigns are tactical ones since most of the brands are looking for immediate numbers given the current economic situation. Client expectations and their need for agency services continuously change and adapt and it’s up to the agencies to be able to fulﬁll all these requirements. Gone are the days when an agency retains an advertiser for a decade or longer. Nowadays the client-agency relationship is a lot more contractual, with shorter periods of one or two years. Every so often a pitch for one of the big clients will take place, allowing advertising and media agencies to step up their game and oﬀer more. Some of the big pitches that took place in 2018 were Royal Jordanian, Umniah, and Zain on a regional basis.

Agency Players
The typical big names such as Starcom/ Leo Burnett, MEC/Wavemaker/ Mindshare, OMD and The Hub are still dominating the market, but due to the bad economy many small players have been introduced and this has aﬀected the market in terms of prices and dragged the big players into price wars, something that didn’t exist earlier. Moreover, some of the media suppliers started to get into competition with the agencies by offering cheaper direct rates to the client; something that we don’t entertain at Seagulls. Giving the current situation in the market locally and regionally, I strongly believe that many agencies will start to go back to the old formula where you have all services (advertising, media, PR, etc.) under one roof and hence the role of the specialised agencies will shrink. Although the above media agencies have consistently dominated the industry ad spends, they are now faced with new contenders for advertising budgets. With the arrival of digital performance marketing ﬁrms and consultancy ﬁrms such as Accenture into the communication scene, agencies will need to step up and deliver on strategic and data analytics solutions to big business problems that traditional advertising can no longer solve alone.
Furthermore, automated and programmatic platforms are making their debut on the media scene in the region, introducing technologies and platforms that promise optimised yet ﬁnancially eﬃcient media campaigns, which helps advertisers be more in control of their ad spend.

As for the future, forecasters expect a more prosperous 2019 for Jordan as it continues to be the hub for new technologies and continues to adapt (against all odds) to the rapidly
changing industry ﬂuctuations.