Middle Eastern creatives are rousing the world of advertising

Impact BBDO Dubai CEO Dani Richa believes the high quality of competition expected by the Loeries has had a positive effect on creativity in the Middle East. “The Loeries has played a major role in setting the bar high and in establishing the gold standard for creativity in the region; and, definitely, it has brought out the best in agencies,” he says.

“To us, it is like competing in sports – it is the arena where you want to outperform yourself and others in a healthy competitive environment with a great spirit.”

The agency is ranked number one in the Middle East in the Loeries Official Rankings, and among its highly creative, bottom-line driving work is the Loeries Grand Prix award-winning ‘Lucky Face’ campaign. 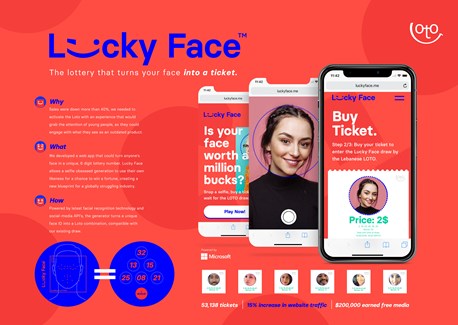 Ticket sales were way down for Lebanese lottery company, La Libanaise Des Jeux. Young people just weren’t buying tickets. Then Impact BBDO Dubai came up with the idea of turning selfies into lottery tickets using face-recognition technology to generate a six-digit code from people’s features. The fact that your face literally becomes your entry into the draw enthralled young people to the point where weekly ticket sale records are now consistently being broken.

“The campaign is bold – even daring – using technology to make something old-fashioned feel fresh, and consumers simply love it!” says Richa.

Another inspirational mash-up of old-school and high-tech came from TBWA\RAAD Dubai – again a Loeries Grand Prix winner. Their ‘Highway Gallery’ campaign for Louvre Abu Dhabi, in which giant images of masterpieces from the museum were placed along the desolate Dubai-Abu Dhabi E11 highway, added interest and colour to a dry expanse of road. But the real innovation is that, as commuters drove past the billboards, their radio signal was replaced by the Abu Dhabi Louvre audio-commentary about the artwork outside their car windows.

Copywriter and 2019 Loeries Jury President Nedal Ahmed, who was born in Libya to Sudanese parents, says that working at the highest level in the US or Europe, she doesn’t always get to see the diversity of creative material she would like. “Sometimes we tend to get in a bubble, we get busy. You don’t seek work that doesn’t fall into your lap.”

Broadening her horizon was part of what motivated Ahmed to head up the Loeries jury – she wants to be inspired by work from the region: “I really want to be involved in a show that is focused on Africa and the Middle East, because I want to see and be a part of the work that is coming out of the area and to understand it.”

Richa shares this view. “If you look at the work and how it has progressed over the years, I would definitely credit the Loeries with having elevated creativity in the Middle East. And as a testament to that, work awarded at the Loeries is also celebrated on the global stage,” he says.

The Loeries final extended deadline for entries is 7 June, 2019. Details at loeries.com