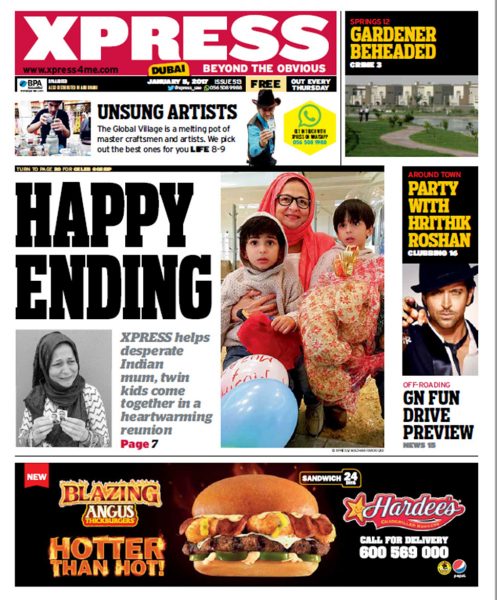 Dubai-based weekly tabloid newspaper Xpress, which is published by Gulf News, will cease print publication, with its final edition hitting newsstands on August 30.

Abdul Hamid Ahmad, editor in chief of Gulf News, blamed market conditions for Xpress‘s closure, saying “we felt that we could not continue doing real journalism without revenue”.

The title, which was launched in 2007 and specialised in local news coverage and investigative journalism,  will continue to exist online, and Ahmad said there will be no staff layoffs.

“It is very painful to announce to our readers that we have taken the decision to close the print edition of Xpress.

“Xpress lived on for more than 11 years, bringing readers quality community stories and investigative reports of high international standards. And for most of these reports, we had to dig deeper to collect information and meticulously check the facts before we published them. Many of these reports were picked up by the foreign media. The stories exposed fraud, they uncovered crime, and they put the spotlight on unfair dealings.

“But these stories did not come easy – we had to fight in the courts as there were cases filed against Xpress. Certain parties, who felt they had been targeted by these investigative reports, did not think twice before filing cases against us.

“We are thankful that we won all the cases. This proves two things. First: Justice is always meted out at UAE courts. Second: Our reports were strong and backed up by facts – confidence was reposed in our stories. That is why losing a newspaper such as Xpress, which focused on communities, people and investigative reports is painful.

“But then reality takes priority over the wishes and hopes of editors. Market conditions do not help real journalism with declining advertisements and loss of revenue. Though we took the tough road to keep Xpress going, there had to be an end to all roads. And we felt that we could not continue doing real journalism without revenue. Hence, the road had to end. We have taken the decision to close Xpress, but we promise our readers that we will keep our content alive online. We will post stories daily or weekly on our microsite Xpress, which falls within gulfnews.com.

“I would like to thank our readers, who placed their trust in us, the editor of Xpress and all the staff, who were a part of its launch, its journey and its success.”