Search engine reveals its trending terms in the UAE in 2020. 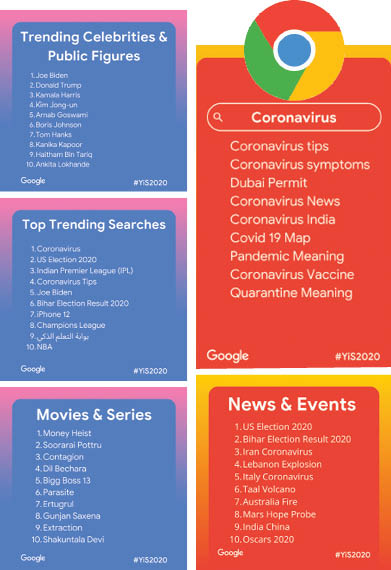 Google announced its Year in Search results for the United Arab Emirates. The annual lists share the most trending search queries that had the highest spike over a sustained period in 2020 compared with 2019.

The lists, which include the top trending searches, people, events, sports, series and movies, are generated by looking at trillions of aggregated and anonymised searches. Spam and repetitive queries are then removed to build lists that reflect the spirit of 2020.

While it was no surprise that coronavirus was the top trending query, elections and sports also caught UAE residents’ attention this year. The US and Bihar elections ranked second and seventh in the top trending queries in 2020. The interest in US elections was also evident with President-Elect Joe Biden, US President Donald Trump and US Vice-President Elect Kamala Harris ranking first, second and third respectively under trending people. Other politicians included the Sultan of Oman Haitham bin Tariq, North Korean leader Kim Jong-un and UK Prime Minister Boris Johnson.

The interest in world events and sports reflected the diversity of the UAE. The Indian Premier League, Champions League and NBA ranked third, eighth and 10th respectively in the top trending queries. Meanwhile, the explosion in Lebanon, the Taal Volcano’s eruption and the Australian Wildfires were among the top 10 most trending world events.

On the entertainment front, Money Heist, Soorari Pottru, Contagion and Del Bechara were the top four trending movies and series in the country.