Creative responses to the Covid-19 crisis – by Colman Sheil

Colman Sheil, chief creative officer at Liquid, examines how brands are tackling "the hurricanes of change"

Twenty-Twenty! It sounded so amazing. It had such a great ring to it. It felt so assured. So balanced. A decade so solid you could say it twice. No wonder we made great plans.

Then it actually happened.

Or at least the first 3 per cent did. That’s how far we got before getting kicked upside-down by the lung-melting invisible predator. Sweeping change slapped us fast. That fun ‘everyone-get-together’ activation brief that you were working on has suddenly become entirely inappropriate today. Yesterday’s logic went out the window like a bullet.

So, with no manual for these uncertain times, how are brands handling this new paradigm? 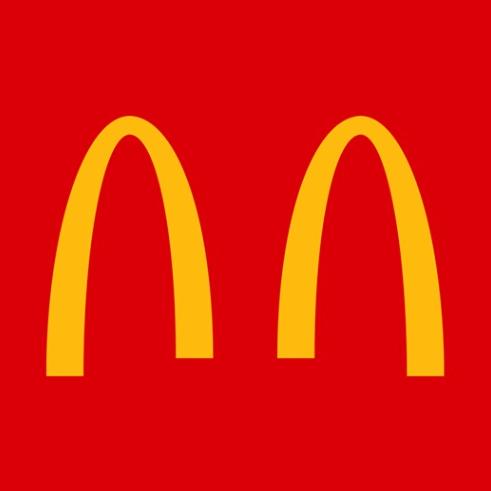 Despite all the unknowns, there are some things we do know. Turns out the best way to stick together during these troubled times, is by not sticking together. McDonalds Brazil skillfully visualized social distancing by separating their Iconic arches. Clearly happy with the result, they posted it to Instagram. But not everybody else was quite so ecstatic, and took to twitter to lambast both the brand and the low-life creatives involved, for exploiting our current global nightmare for an award-hunting opportunity. Personally, I felt this was one of the better Covid-19 logo augmentations (there are plenty of worse ones out there). Today however, Instagram remains one less post than it might have otherwise been. 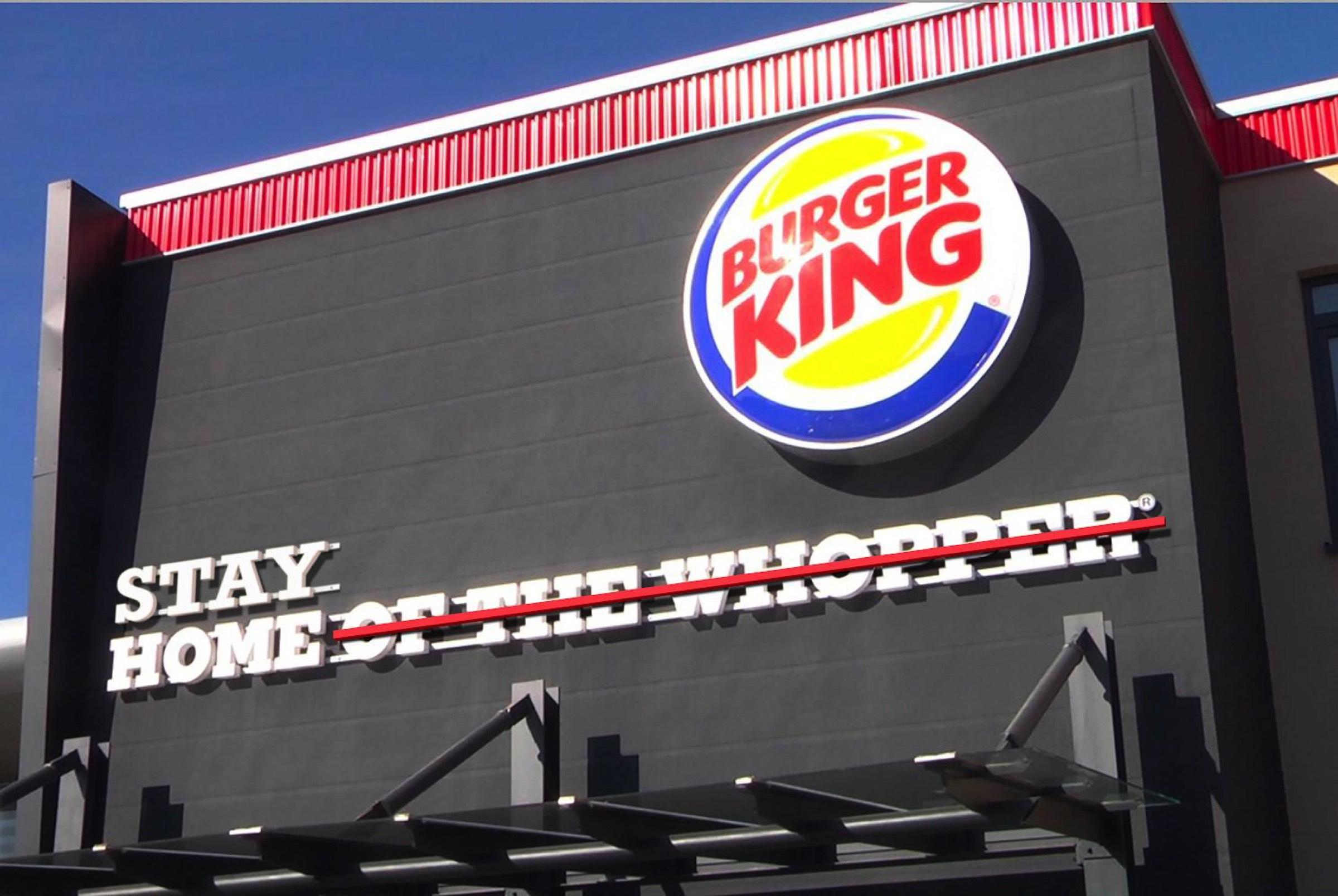 Meanwhile, fast food rivals Burger King have fared better with their own self-identity remix, advising customers to stay home. They achieved this by altering the signage on their own stores. Their own closed stores. Where they cannot sell burgers at this time. Of course, you would need to be a ‘go-outside-baddie’ to see this campaign in the flesh, but you probably came across it online. Probably around lunchtime? Probably when that stalking cookie banner flipped you a reminder that they do online deliveries. Probably around the time when you realized that crossing out the word Whopper, really draws your attention to the word Whopper. 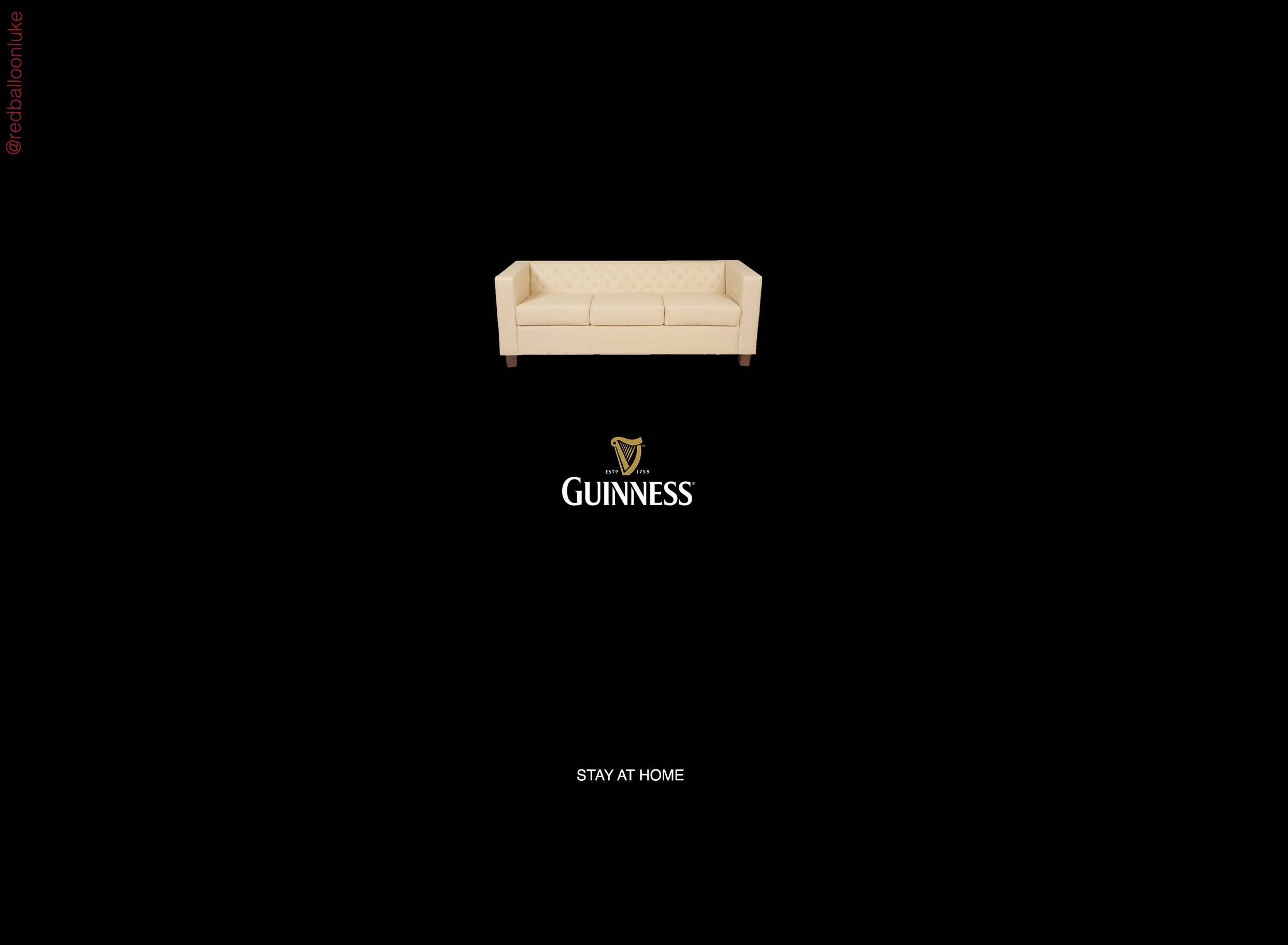 Imagine a pint of Guinness so big that the head was the size of a sofa? OK you don’t need to imagine it anymore, just look at Luke O’Reilly’s clean and considered poster of the same. This speculative piece gathered so much love in Ireland, Guinness picked up on it and went ahead and ran it online to advise people to stay at home. TBH, halfway through a pint that size, I doubt I’d be able to find the door.

Has anyone else noticed a marked increase in brands tugging away at our heart strings lately? Showering us with pep talks about our inner strength, reminding us that we’re just humans after all, dogs love us, and lamenting empty sandy roads etc. Listen… things are bad enough already. Ikea on the other hand effectively demonstrates emotive storytelling here. And despite it being an old story (home is where the heart is), it’s delivered with enough compelling depth, visual interest and freshness of expression to feel sincere. 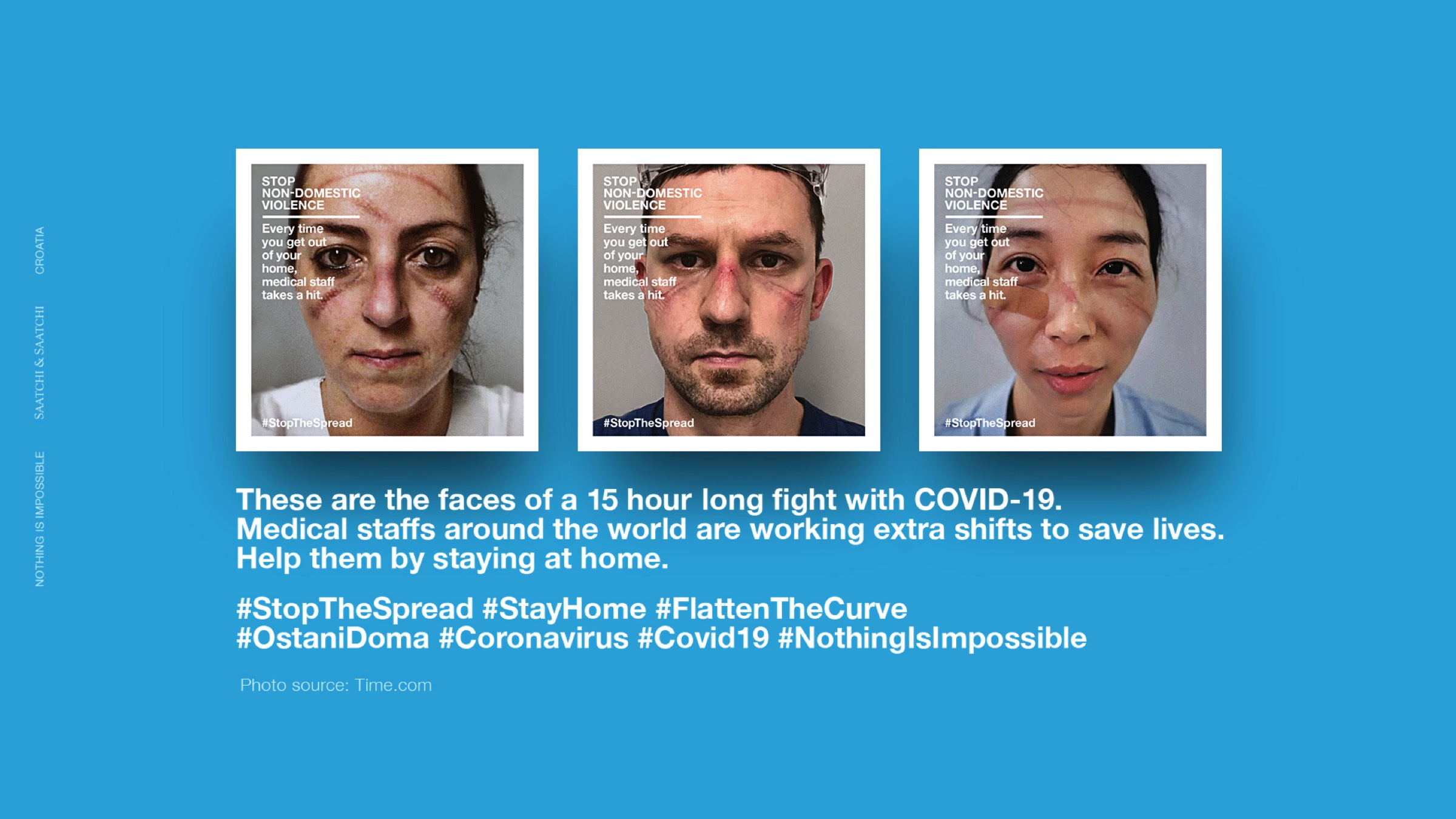 This staying at home lark is not easy. Being cooped up all day, boredom kicks in, cabin fever takes over – and sooner than later, you’re crawling up the walls. It’s just not natural. Staying at home is tough. Or is it? Saatchi & Saatchi Croatia puts it into perspective by taking a long hard no nonsense look directly into the tired but dedicated eyes of our healthcare workers, fighting the fight for all of us on the front line of the battle. If that’s not you, you got the easy job. Stay home. 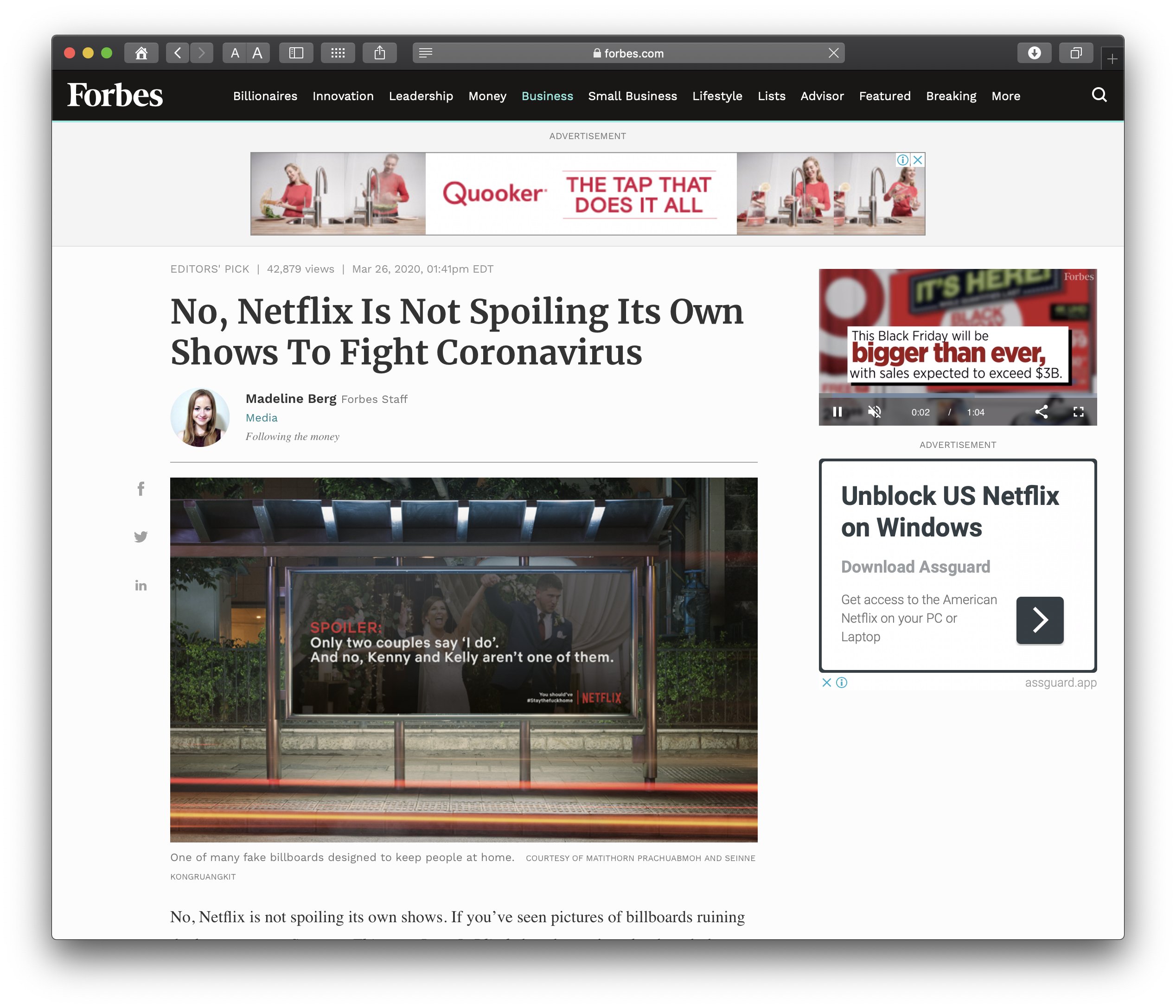 Before we were all recently asked to retire indoors and watch TV, Netflix was already single-handedly gobbling up about 15 per cent of the global download internet pie. Recent events doubled this figure, with a single week in March clocking up a staggering 45 billion streaming minutes. That’s over 85 thousand years if you stick them all together. Clearly they are doing something right. So much so that they were asked to down scale their resolution in Europe, because some of the other boring stuff like Zoom / Hangouts / jobs / education / the economy etc. wanted a look in too. So, did Netflix really make venturing outside an even more unattractive proposition than it already is, by polluting the outdoors with spoilers to their famous shows? Ballsy idea perhaps, but no, they didn’t. It’s fake. 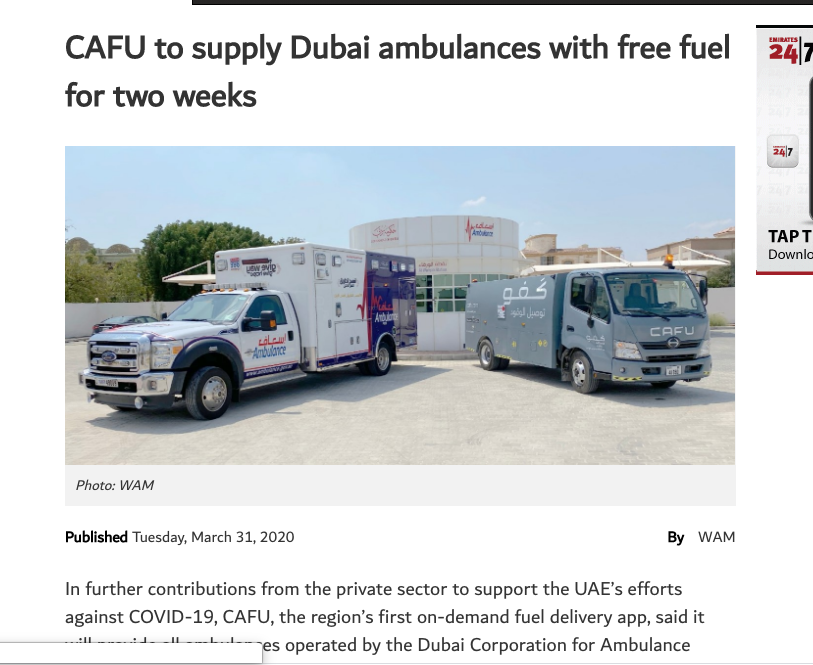 Sometimes actions speak louder than words. Hats off to on-demand fuel delivery local brand CAFU for a superb initiative – supplying Dubai Ambulances with free fuel for two weeks. This is the type of action which will make a real difference. Well done CAFU.

Agencies usually struggle when a brief ‘moves the goalposts’. These days you’re lucky to have a brief, and even more lucky if those goalposts are moving. There’s now a chance it might actually work. With the hurricanes of change upon us, the old goalposts don’t even exist anymore – they date way back to the ancient world of a few weeks ago.