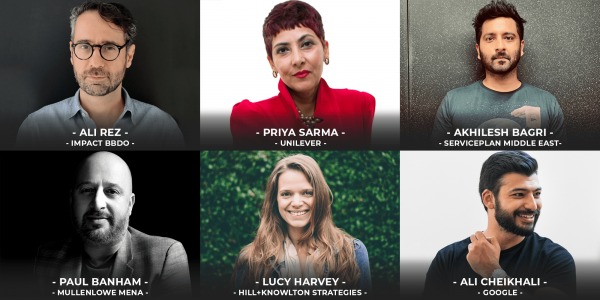 The Cannes Lions International Festival of Creativity returns in 2022 as a live event and will provide an annual forum for the global industry to address the most pressing issues that they and the world are facing today.

As the official representatives of the Cannes Lions International Festival of Creativity, Motivate Media Group and Motivate Val Morgan are pleased to announce the line-up of jury members from the UAE who will come together in Cannes to complete the final stage of judging and awarding of Lions.

Ranked amongst the Top 10 ECDs in the world on the World Creative Rankings and named Creative of the Year twice by Campaign magazine, Ali Rez is one of the most successful creative leaders in EMEA. Rez’s work has been instrumental in Impact BBDO Dubai being named the No.2 Creative Agency In The World in 2021 on the WARC report, and has brought tremendous positive impact to business and social causes alike — he currently leads creative output for the IMPACT BBDO Group across the Middle East, North Africa and Pakistan region.

Rez has won more than 600 international accolades in his career spanning four continents over 20 years, which include several Cannes Lions, Clios, D&AD, Effies, and a United Nations Peace Medal – awards which have led him to be ranked No.1 ECD in MENA and APAC in 2021 on a number of creative rankings.

Moving from California, Rez currently lives in Dubai, where he is an avid mountain biker. Besides lecturing at Oxford University and St.Martin’s College, Rez has exhibited at Tate UK, spoken at Tedx, captained a cricket county team, and — being a firm believer that curiosity leads to creativity — has travelled to 133 countries.

Priya joined Unilever in February 2008 as the Corporate Communication Manager for Middle East and North Africa (MENA) and is based in Jebel Ali, Dubai which is the regional Unilever headquarter. In January 2012 she was assigned the additional responsibility for Employee Engagement across the countries of MENA, Turkey, Russia, Ukraine and Belarus. In 2019 she was promoted as Sr. Sustainability Head for MENA, Russia, Ukraine, Belarus & Turkey and in 2021 the additional remit of MENA External Affairs was added to her portfolio.

In 2016, she led the formation of the Advertising Business Group (ABG) and has been its Board Member since 2016. The ABG is GCC’s largest advertising and marketing self-regulatory body with over 60 members who account for over 70% of the MENA’s advertising spend.

Since 2018 she has been representing the Multinational Companies Business Group in the FCSA led Private Sector Advisory Council on the SDG’s.

In Nov 2020, Priya led the launch of the UAE Chapter of the Unstereotype Alliance (UA) in partnership with UN Women. The UA is a thought and action platform that seeks to eradicate harmful gender-based stereotypes in media and advertising. For this, she was recognised by Campaign Magazine as a ‘Marketing Game Changer 2020’.

Akhilesh started his journey in advertising in Mumbai at a malleable age of 17, before which he was a full-time teenager. A copywriter by trait he has worked at various acronyms and anacronym agencies such as DDB, BBDO, JWT, McCann and Leo Burnett.

Flashback, 2007: Akhilesh wins an all-expenses trip to Cannes as a student to be part of the Roger Hatchuel Academy. Still wet behind the ears he has no idea what to expect from the week. His mind is blown.

Present Day, 2022 : Now a multiple-award-winning creative and CCO of Dubai Lynx Independent Agency of the Year (how about that plug) Akhilesh gets invited to an all-expenses-paid trip to Cannes, this time as a jury member. He still has no idea what to expect from the week. His mind is prepared to be blown.

He’s judged at D&AD, One Show, Campaign BIG, NYF, IAB, Caples, Immortals, Lories, TIKTOK and many other global shows, and he has spoken on a variety of subjects at the likes of Cannes and Lynx. Paul’s work/opinions have also been published in many advertising books/annuals and editorials in the Guardian and The Wall Street Journal.

After moving from London to Dubai in 2012, he helped steer FP7 McCann to the enviable position of No.1 – ‘The World’s Most Effective Agency’ (Effie’s). Currently, he’s working to lift MullenLowe MENA to equally lofty heights – In 2021 alone, they collected 130+ global Awards – and three ‘Agency of the Year’ titles, including the Campaign Tech’s  ‘Global Agency of the Year’ and New York Festival’s ‘Regional Agency of the Year’ 2021. Out of the top 200 agencies on the Drum Report, MullenLowe ranked 17th in 2021. They were the AME Awards’ 2nd Most Awarded Agency Globally in 2021 and the Caples Awards’ 5th  Most Awarded Agency Globally.

Lucy has over two decades of experience in the communications industry. She has worked with some of the world’s most recognisable brands and is currently supporting the growth of the creative firepower of H+K through the development of its award-winning Studio and Innovation + Creative hub in the Middle East, Turkey, India, and Africa.

Now living in Dubai with her family, Lucy has developed and led memorable campaigns, and delivered professional training to leaders across the region’s C-suite. Lucy’s resume includes consumer launches, impactful government communications for national and global initiatives, and effective internal campaigns. She champions the intersection of technological innovation and creativity, something the team at H+K are working on; but is most impressed by insightful ideas that are brought to life with simplicity, beauty and clarity. A big believer in giving back, Lucy is known in the industry as an ardent champion of nurturing young talent.

Currently listed in the PRWeek Middle East Power Book, she has been actively involved with Dubai Lynx as a coach and mentor in the See It Be it programme for young female talent, and is a regular judge and speaker for awards, seminars, and workshops.

Originally from the UK, Lucy previously worked for Freud Communications and in video production at The Press Association.

Ali is an award-winning Creative Strategy Lead who works with brands and agencies across MENA, Turkey and SSA on maximizing their creative impact to solve critical business problems. In his role, he pushes the boundaries of Google’s tools and platforms to drive innovative work at the intersection of data, technology, and creativity. Before joining Google from the agency world, Ali was one of the most awarded creative strategists in MENA. The Drum’s ‘Big Won Rankings’ ranked him among the Top 20 Planners Worldwide in 2018 and the B&W Report named him MENA’s Planner of the Year in 2017.

Today, Ali enjoys being on the judging side of top award shows such as Cannes Lions, Dubai Lynx, WARC and New York Festivals in addition to teaching his Design Thinking & Product Creation course at Miami Ad School. Outside of work, and when he’s not agonizing over his favourite football team’s performances, he spends most of his time as a self-proclaimed food and filmmaking critic.

The initial stages of judging will take place remotely, with a cohort of Shortlist jury from the UAE to be announced over the week ahead.

On the judging at this year’s Cannes Lions Festival, Philip Thomas, Chairman, LIONS, said, “The return of the physical Festival to Cannes in June allows us once again to bring the juries together in-person to define the benchmark of creativity.”

The Cannes Lions Festival will take place between 20-24 June, and will be accessible to everyone, and delegate registration is now open. If anyone is unable to travel for any reason, LIONS Members get exclusive digital access to Cannes Lions – plus a series of other benefits, throughout the year.