Work that makes you say ‘OOH’

They say you never forget your ﬁrst time. Does anyone else recall the ﬁrst time they saw a ‘special build’ on Sheikh Zayed Road? Or their ﬁrst die-cut bridge banner? Or the debut of an automotive brand with headlights on the unipole? These were award-winning media executions at the time, changing the way clients and agencies used OOH surfaces, and were heralded at industry awards for pioneering the medium and, of course, their innovation.

Innovation is a somewhat overused word, isn’t it? Innovation is deﬁned as making changes in something established, especially by introducing new methods or ideas. At the time, a bridge banner for a Jumeirah clinic with a stethoscope sticking out above the rest of the ad was, indeed, making a change in something established. The same goes for the 4×4 LED headlights on a unipole and the multiple other special builds we’ve seen over the years. However, as digital media grew to dwarf OOH
revenues ($226bn versus OOH advertising at $35bn, according to Statista’s 2019 estimates), the need for another phase of innovation has once again risen and the world’s biggest out-of-home players have responded. The interesting thing this time around, however, is that the major OOH developments are either inspired by or in collaboration with digital media innovations.

Take, for example, Clear Channel Outdoor. One of the world’s biggest OOH media owners, Clear Channel has been investing heavily in technology and data across the globe to transform OOH and keep it relevant on media plans. Clear Channel’s unique Radar product is a suite of tools that uses anonymous, aggregated mobile geolocation data to more eﬀectively plan, measure and optimise the impact of OOH. It allows media buyers to understand the actions of audiences exposed to OOH campaigns, enabling them to plan and build campaigns based upon real-world consumer behaviours to more eﬃciently target audiences with the right message at the right time on the right panels. 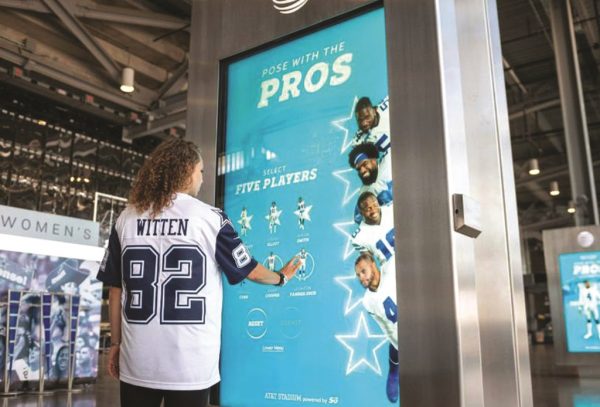 Currently available in the US, and soon to be rolled out in Europe, Radar also allows advertisers to measure the actions of audiences exposed to their OOH ad both to prove its eﬀectiveness and to feed the audience insights generated back into the planning tool to optimise future campaigns. Speaking of programmatic OOH buying, the German start-up HYGH connects anyone who has a surface or an advertising display face with a potential advertiser. In the true spirit of start-ups, it is the Uber of digital OOH, opening up the marketplace to users, providers and everyone in between. You own a small coﬀee shop or a neighborhood gym? Simply put in a couple of Smart TVs, register on HYGH and you will start seeing ads appearing in your establishment – from Ford Motors all the way to Betty’s Manure (conveniently available from the shop next door).

It’s not only the way OOH media is being bought and sold that is changing; it’s also the formats being sold. So-called smart billboards have been around for several years, but they continue to evolve and become more relevant and, well, smarter. In Sweden, the pharmaceutical ﬁrm Apotek and their ad agency Akestam Holst launched an anti-smoking campaign by installing a footpath mupi with smoke detectors that would trigger a man coughing in the ad when a smoker walked past. 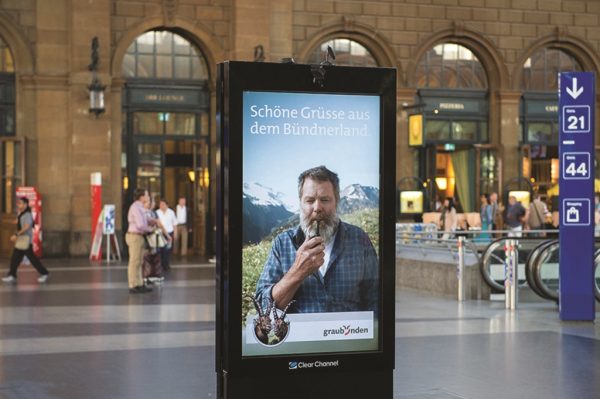 The iconic Piccadilly Lights in London’s Piccadilly Circus stoked the share-of-voice argument by displaying all six of its advertisers at all times, albeit it in a revolving Rubik’s-Cube-style roulette wheel
motion. But it also installed smart capabilities, allowing advertising to get creative when it started raining, or when the sun set, or even live streaming advertisers’ launch events and unveilings. AR and VR are also playing a key role in the innovation of OOH. However, their limitation in terms of volume of sites is a natural barrier that restricts them mostly to being ‘nice’ in the media category at the various advertising award ceremonies. Eye-level, pedestrian-friendly booths that oﬀer consumers the chance to have their photos taken with their favourite sports star, or to get a free bottle of water by having their heart monitored with an elevated heart rate over 130 bpm, or even the Graubunden (Switzerland) Tourism campaign “Mountain Man”, which allowed train commuters to be invited by a gruﬀ tourism ambassador at nearby Graubunden to his mountain dwelling… These are all eye-catching and cool, but hard to roll out beyond one or two display sites at best.

Beacon technology has been pushing for attention for several years now, with the technology getting
more cost-eﬀective each year. The uber-luxurious Knightsbridge department store Harrods in London
has been a pioneer of this technology, meshing customers navigating through the mobile store guide app along with its larger-than-life digital video walls to provide real data and feedback on shopper habits within the retail environment.

As an industry, OOH hasn’t yet reached its widely anticipated watershed moment, where it is expected
that digital OOH will surpass traditional OOH spend. We’re currently at a point where the tech is ready andraring to go, but the people and the processes are not. DOOH may not be so straightforward to plan and buy, but it is eﬀective in twinning the most powerful creative platforms with eﬃcient execution methods. According to Pricewaterhouse Coopers, outdoor advertising was the only traditional media category that grew in 2018, reaching an estimated $33.5bn. Much of that growth hasn’t, however, been down to the latest cutting-edge innovations, masterful technology, mobile data, or mapping consumer movements during their commute. A lot of it has been down to hard graft from the OOH companies, working harder to showcase their sites, and providing brands with immersive, thorough experiences other media have fallen short of. 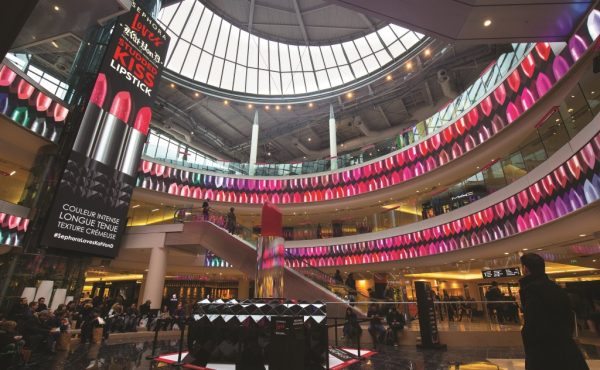 Clear Channel’s appropriately named “Digital Dream” at La Defense Mall in Paris hands over a
whopping 250 sqm to advertisers to completely overtake and dominate an entire atrium in one
of Europe’s busiest shopping centres. It’s an overwhelming, engrossing display of attention, and one that top brands around the world have been clamouring for ever since its inception.

It’s only a matter of time until these innovations are here in the Middle East, and the region will face
challenges (and opportunities) in adopting and accepting these, as it did when digital media went
through a similar growth spurt a few years ago.