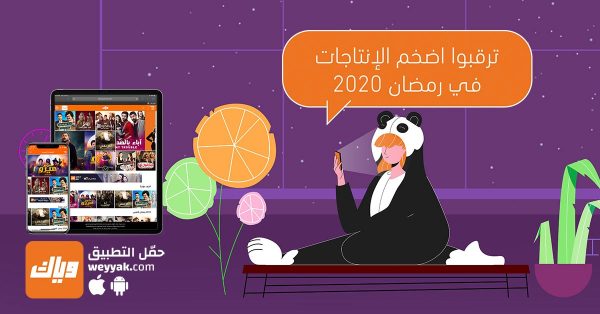 The Holy Month of Ramadan is finally here, and with it returns the established tradition of spending some time every night to watch the latest Arabic series. Ramadan has always been an important month for families to spend time together, which is why it is no surprise that the practice of gathering around to watch these series after iftar has caught on.

As with every year, people are always facing the challenge of which series to watch and where to watch it. It used to be that one series would rise to popularity and become the go to show to watch at a certain hour (usually just after iftar). Nowadays however, competition is fierce with multiple shows vying for our viewership on different channels.

Thankfully, streaming platforms like Weyyak are helping us find the latest and greatest Ramadan series in one place, which we can watch at any time, so we never have to miss an episode or wait for reruns.

This year, Weyyak has added several new series for users to enjoy during Ramadan. Starting off with an exclusive: Al Joker, a crime drama about a mysterious killer who the police are trying to catch before he strikes again. This Syrian production is suspenseful in its story and offers a new take on the genre.

Another exclusive is Ahla Ayam, a gripping series that has generated a lot of excitement due to its cast, particularly the Syrian star: Motasem Al Nahar. Fans are excited to see how his role in the story will pan out. Speaking of story, it revolves around childhood friends who escape the war in their country, moving and settling in elsewhere to face new challenges.

Additionally Two Ramadan series have been added, one of which is Brokar: this new historical show takes us back to the days of French colonization in Syria. Brokar has sparked a lot of interest with fans due to its rich cast of Syrian stars, which include Zuhair Ramadan, Salma Almasri and Rana Abyad.

The other show is Muqabala Maa Al Sayed Adam (Interview With Mr. Adam), which is a thrilling drama that revolves around a medical practitioner (played by Ghassan Massoud). It portrays how his life is turned upside down when he gets involved in the illegal organ trade.

These are some of the biggest Ramadan productions for this year and they are sure to keep you entertained during this holy month. With these recently additions, Weyyak has also added a new cooking section, to their platform. This section serves as handy portal to several varied cooking programs which will help you craft the tastiest of iftar meals throughout Ramadan.

This is all on top of the thousands of hours of pre-existing content, including exclusive Arabic and Indian series that are only available on Weyyak. The application is available worldwide, and can be downloaded on mobile phones and smart TVs, giving you the choice to watch both the classics and the new big hits, at any time and place.