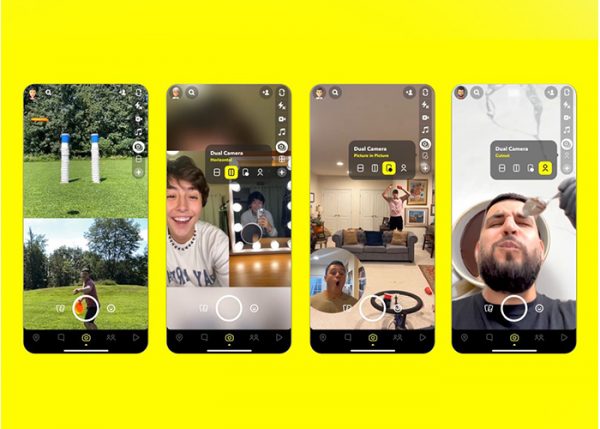 Snap Inc. has announced the availability of its newest feature – Dual Camera on the Snapchat platform. The new Dual Camera mode will enable Snapchat users to create content using their front and back-facing cameras simultaneously. It will be made available globally on iOS and later on Android.

Dual Camera was announced earlier this year as a part of Director Mode, Snapchat’s new creator camera. To bring even more visibility and spontaneity to the tool, Dual Camera features prominently on Snapchat, with a new icon to activate the feature in the camera toolbar when users open the app. With one simple tap, Snapchat users can start creating Snaps and Stories, or more polished Spotlight videos, with double the perspective. Dual Camera will still be available in Director Mode alongside Green Screen, Camera Speed, and Jump Cut, which are slated to launch in the coming months.

The Dual Camera will have four layouts: vertical, horizontal, picture in picture, and cutout. Snapchat Users will also be able to add their favorite Snapchat creative tools, including music, stickers and lenses. At launch, Dual Camera will support Lenses in post-capture, with capture mode capabilities to follow in the coming months.

Here’s how you can use the Dual Camera feature: