The gaming sector is continuing to flourish in the United Arab Emirates and the Kingdom of Saudi Arabia during the pandemic lockdowns. Latest findings from a gaming survey conducted by GfK in the two markets revealed that over half of all UAE and KSA respondents increased their time spent on gaming.

The gaming sector is continuing to flourish in the United Arab Emirates and the Kingdom of Saudi Arabia as gamers are making the while due to being confined to their homes during the pandemic lockdowns. Latest findings from a gaming survey conducted by GfK in the two markets revealed that over half (50 per cent) of all UAE and KSA respondents increased their time spent on gaming.

In addition, the pandemic has also triggered a newly installed base of gamers in the UAE (+15 per cent) and Saudi Arabia (+10 per cent) with women accounting for over 40 per cent of this new base. The majority of new gamers overall were between the ages of 26 and 35.

“With social distancing and strict policies to curb Covid-19 being imposed by policymakers in both countries, gaming is still seen as one of the leading forms of entertainment, and more women turned to gaming to fulfil that void,” said Shika Samuel, Analyst for IT panel at GfK.

It is apparent that the pandemic has significantly altered gaming habits on the three main devices: smartphones, consoles, and laptops in both UAE and Saudi Arabia. Survey findings revealed a spike in the number of gaming hours on these devices by consumers during lockdown.

Even though the number of gaming hours was reduced after the lockdown ended, the time spent gaming post lockdown was still higher than before it began as people continued to spend more hours playing games. In the UAE, an additional 1.4 hours were spent daily on smartphone gaming after the lockdown ended, compared to before it began, and the duration is slightly higher, at 1.5 hours, in Saudi Arabia.

A quarter of the respondents in the UAE also looked at the app rating prior to downloading it, whereas one in five in Saudi Arabia did the same. Almost a third of the UAE respondents also wanted the capability of playing offline, whereas only a quarter of Saudi respondents mentioned the same.

Among Smartphone gamers, 31 per cent UAE respondents are bothered that they could not play game offline whereas 25 per cent KSA respondents mentioned the same.

Growth in the laptop gaming segment tracked by GfK was higher in Saudi Arabia. Amongst those surveyed in the Kingdom, 57 per cent purchased a laptop for gaming compared to 49 per cent of those in the UAE. Among this segment of gamers, online purchases of gaming titles were relatively higher in Saudi than that in the UAE, a trend that continues from before until after the lockdown period. The report also showed that 55 per cent of respondents in the UAE and 57 per cent in Saudi Arabia surveyed would consider purchasing a laptop for gaming by mid-2021. 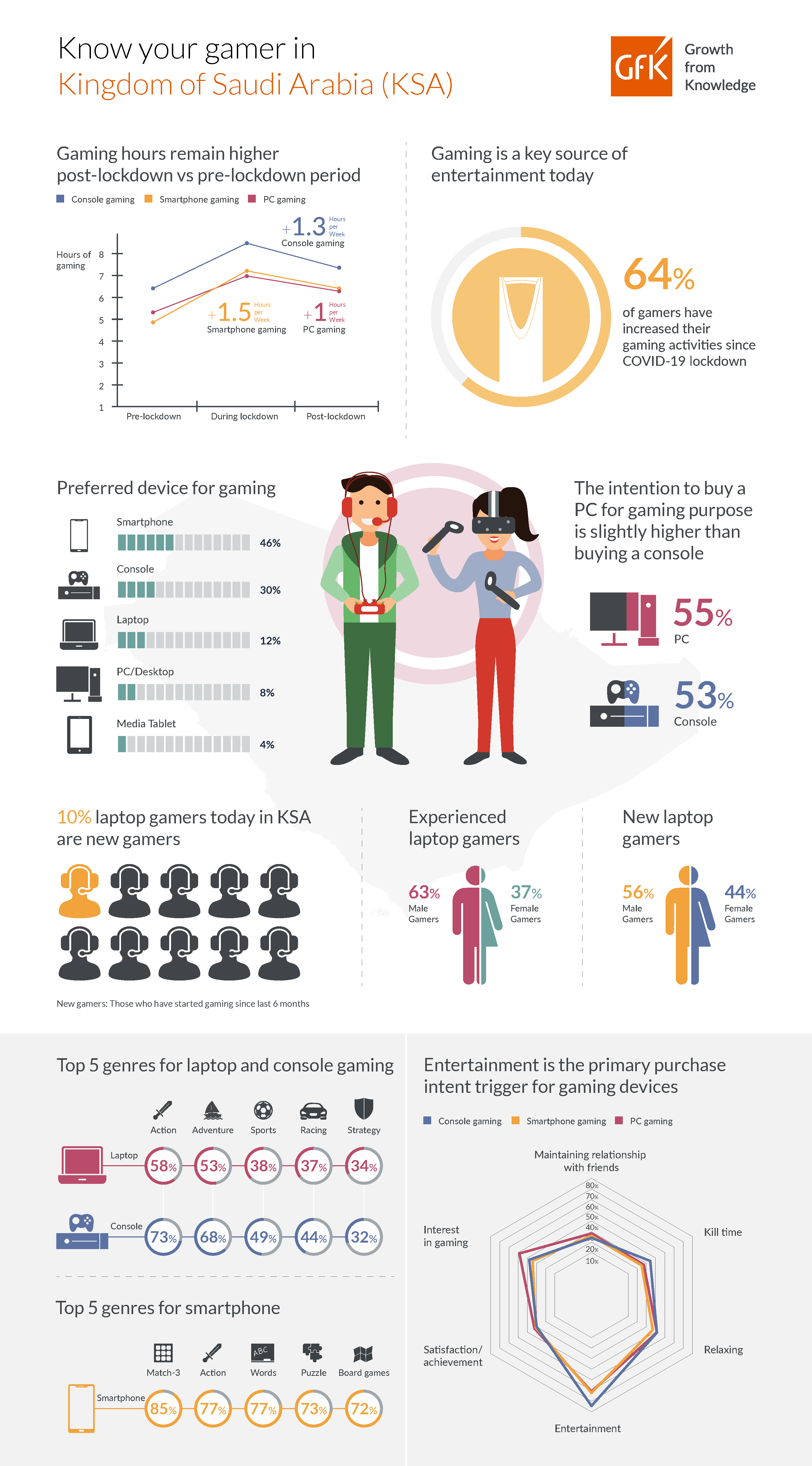 Console gaming habits on the rise

Amongst console gamers in both the UAE and Saudi Arabia, the top five types of gaming titles were also the same in both countries: Action, Adventure, Sports, Racing, and Arcade.

Samuel added, “With restrictions still being imposed, and more people turning to gaming as a form of entertainment we will most likely see a continued growth in time spent playing across all devices in the coming months. I believe that experience fosters a growing habit, and with more time for gaming, we will most likely see an increase in purchasing consideration for devices, accessories, and games as people might look to enhance their gaming experience.”

Where are gamers buying their device?

GfK’s Know your Gamer study was conducted in November – December 2020 with the objective of understanding how gaming habits have been shifting and continue to evolve since the Covid-19 outbreak. Nearly 3000 gamers in the United Arab Emirates (1,000), Kingdom of Saudi Arabia (1,047), and South Africa (874) were surveyed online on topics around gaming, including their habits and preferences, purchase behaviour, as well as preferred brands and game genres.