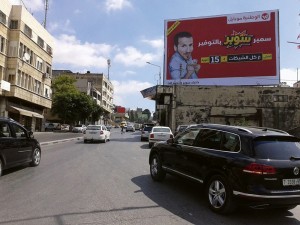 In the beginning there were billboards.

Hoardings and signage began to spring up in earnest along roadsides and on the walls of the West Bank and Gaza in the 1990s. The messaging on them is feature-led, crowded and typical of a unique media market.

Currently there is one stand-out billboard in the West Bank, for Mentos mints. It has the global, succinct tag line, “Who says no to Mentos?” on it, and locals maintain it is the only billboard in Palestine that bears only one sentence.

Signage in Palestine is traditionally as crowded as the Occupied Territories themselves, and Zeina Abu Hamdan, marcom manager at Publicis Zoom in Ramallah, says this reflects the business culture of the country.

“One of the current struggles with our clients is telling them you don’t really have to put five or six messages in an ad; one message is enough,” she says.

She adds: “You will not find any billboards that have only one sentence; they will be packed.”

To understand advertising in Palestine, one must understand local social and business culture, say the locals. Outdoor space is an expensive commodity and advertisers are keen to make the most of it with multiple messages.

In a small country, under occupation, advertising has different reasons to exist than in larger, freer, more advanced markets.

A 2013 academic study on advertising in daily newspapers, cited by the United Nations Education, Scientific and Cultural Organisation (Unesco), found that 38.8 per cent of space in the publications examined were taken up by advertising. Of this space, 49 per cent was made up of social messages such as obituaries and congratulations, while messages from government bodies – a big earner for publishers elsewhere in the Middle East – were down at 6th on the list of advertising categories, taking up only 3.7 per cent of space.

The largest advertisers in Palestine tend to be local. Telecoms firms, banks and real estate businesses lead spend. But in a market where family names dominate businesses, there is often little need to build consumer awareness.

However, branding was the next evolution of the advertising industry. In the late 2000s, agencies began to extend their offerings beyond being media agencies for billboards, newspapers and radio, and started providing their clients with logos and taglines.

“They became familiar with the concept of having a brand book and brand guidelines; they paid attention to that and started saying OK, maybe we need to have a clear brand,” says Abu Hamdan. “However, the focus was mainly on design rather than on the brand personality of the business. They wanted their brands to be communicated visually, rather than anything else.”

On client websites back then, rival businesses – banks, for example – would all proclaim the same values. Clients in Palestine had a tendency to shy away from differentiation. Their target market was everybody, their specialisms everything. It was mainly through design that they could stand apart, which meant art directors and designers began to garner more appreciation. No longer were they just creating layouts to a customer brief; they were now coming up with visual concepts, and as a result training focus on the deeper brand identities behind them.

“Now we don’t have a problem with clients’ branding, thankfully,” says Abu Hamdan. “We are past this era of trying to explain to clients that they need to have a clear brand, that they need to
be differentiated from their competitors.”

A strong media presence is used to show alpha-dominance of the Palestinian marketplace, and the big advertisers – telcos, real estate and finance – can spend up to $200,000 on a campaign lasting a month or two. That is big money in the local market.

However, not all marketing budgets go into media. They are also channelled into sponsorships and corporate social responsibility in a major way. Jawwal is a subsidiary of telecoms company PalTel and was the first mobile provider in the country. From its inception in 1999 to the arrival of competition, in the form of Wataniya Telecom, a decade later, it was known for its CSR spend.

“They would sponsor everything that takes place in Palestine; they would be part of everything,” says Abu Hamdan. “Because of our social culture in Palestine, because of the way business is being done, big businesses tend to like to show their dominance and presence in the market.”

Billboards tend to be bought by the square metre in long-term contracts. They are favoured by the telecoms firms and the other big spenders, but that is gradually changing. “Now, year by year they are reducing a couple of hundred square metres from their annual contracts,” says Abu Hamdan.

In 2011-12, social media channels began seeing an uptick in marketing from Palestine. Brands were realising that their consumers spend a lot of time online, and as outdoor billboards are still dominated by the big players, small and medium-sized enterprises have now begun advertising through more affordable online channels. Their spend is still small, but digital gives them a low-cost entry into advertising.

These businesses would previously have gone to newspapers or radio, if they allocated any budgets for media. The only way they could end up on billboards would be if they were partnered with a charity.

Many NGOs are active in the Occupied Territories and, although they allocate portions of their significant communications budgets to fund partners’ marketing campaigns, they tend not to be conspicuous themselves except in the small print and logos on ads promoting philanthropic initiatives.

The EU has been running a campaign promoting its work in Palestine recently. Unicef partners with many projects, which it helps to promote. And foreign government bodies will add their logo where they are supporting campaigns. For example, USAid has been funding a drive to persuade citizens to pay their taxes.

Palestinians are traditional, loyal and generous. This is the social culture of Gaza and the West Bank, and that extends into the nation’s business philosophy, which in turn spills over into advertising. Big, established brands will spend on CSR and big, established media. And they will use their ad space to promise to be all things to all people. They favour mass communications over niche campaigns, leaving more targeted spending to those smaller businesses with tighter budgets but a preparedness to use new media.

And agencies reflect their market. They have developed from being media providers into full-service agencies that can handle clients of all sizes. But until clients start to specialise, change will come slowly to Palestine’s media, marketing and advertising industry even as it moves into the digital age.