MBC Group one of the largest media companies in the Middle East & North Africa, has secured its first Top 10 position for digital and social media video views in the world.

According to Tubular Labs’ latest released results for the month of May 2020, MBC Group has achieved stellar growth over the past month, jumping from the 19th position in April, to the 10th position now on the leaderboard for global media and entertainment entities… and a fast increase from its 37th. position in 2019.

The media company achieved a total of 4.56 billion digital and social video views in May 2020 – compared to 2.5 billion views in April – resulting in a month-on-month (MOM) growth of nearly +90%. In terms of digital and social media views, MBC Group is now ahead of all European media organisations, and only behind global U.S. leaders.

For the month of May 2020, MBC GROUP achieved the following for its video content: 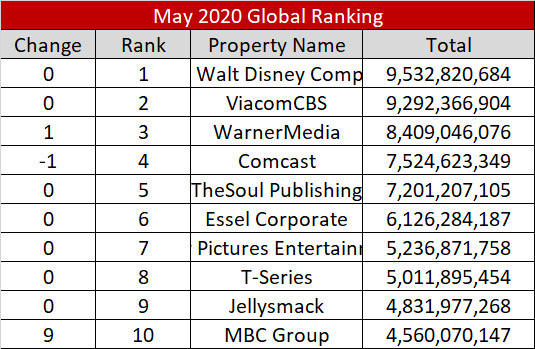