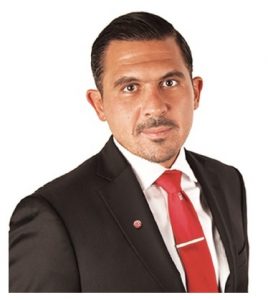 AI – beyond the naked eye in the social media universe.

Looking up at the night sky has an overwhelming effect on most people because the universe is unfathomable.

We still don’t know exactly how many stars are in our own Milky Way, but estimates range between 100 billion and 400 billion. this is just for one galaxy, and there are billions or even trillions of galaxies in our universe. this profound feeling of vastness and complexity is no longer confined to the night sky. In fact, I experience this feeling every time I consider the big data we are creating right here on earth. our data is now so complex that traditional processing methods are incapable of handling it. the major contributor to this situation is our digital interactions – particularly on social media platforms – where numbers again reach mind-boggling heights.

For example, twitter users post around 200 billion tweets per year – as many tweets as there are stars in our galaxy. We are approaching the point where big data is moving beyond human grasp. Why do we need to address this? Because social media data is highly valuable to practically anyone who makes, sells, markets or promotes anything, which includes those working in the communication world. However, data is only as valuable as the intelligence we can glean from it, and throwing more bodies at social media analysis is failing to mine the true depths of its value.

Major companies including Google, facebook and IBM have realised this failing and are finding the solution in Artificial Intelligence (AI), which is the development of machines that can perform tasks that normally require human intelligence. AI feeds on big data and can learn from experience to identify patterns in it in seconds.
When AI meets social media data, it can uncover what truly makes customers react, engage and purchase, and detect what content inspires action, raises brand awareness and drives sales. this can be translated into actionable insights that inform strategies and improve results.

AI has already infiltrated the social media space with major companies such as LinkedIn, facebook and Pinterest. I believe that AI will soon be within the reach of smaller companies and individuals, bringing big data back within our grasp and providing us with unprecedented insights.

In the world of social media analysis, AI represents the jump between Isaac Newton’s telescope and the Hubble Space telescope. It will allow us to plumb the depths of the social media universe and reveal complexities that would otherwise remain invisible to the naked eye.