The analysis reveals Emirates, adidas and iPhone top the list of most recommended brands in the UAE, Saudi Arabia and Egypt, respectively.

YouGov analysis reveals Emirates, adidas and iPhone top the list of most recommended brands in the UAE, Saudi Arabia and Egypt, respectively.

The rankings are based on YouGov BrandIndex’s positive Recommend score, which measures the percentage of a brand’s customers who would recommend it to a friend or colleague. Every brand in our Rankings has a minimum sample of 300 and has been tracked for at least 6 months, with all scores being rounded to a single decimal place.

Sportswear brands are well represented in the Saudi top 10 rankings as well. Alongside Adidas, Skechers (score of 85.6) and Nike (84.6) appear in the list, highlighting the increased enthusiasm for fitness among consumers during the pandemic.

Travel brands heavily feature in UAE & KSA’s top 10 rankings. In the UAE, alongside Emirates, Etihad Airways makes an appearance on the list. Similarly, in KSA, Emirates and Saudia both occupy a spot in the top 10 rankings.

Dairy giant Alamrai’s proclamation to be the world’s first brand to obtain a Pandemic Prepared Certification from AIB International for its food safety practices amidst the pandemic has certainly won over its customers, landing it a spot in all three rankings.

Similarly, iPhone features in all three lists, enjoying strong advocacy among consumers in the region.

YouGov also revealed the brands that made the greatest improvement to their Recommend score among customers over the past 12 months. Travel & airlines companies heavily populate UAE & KSA’s improvers lists, reflecting the building appetite for travel among residents. IndiGo noted the biggest uplift (of +12.4) to its Recommend score in the UAE, while flynas and Egypt Air emerged as the “most improved” brands in KSA, with a rise of +9.7 points each to their Recommend scores.

In Egypt, Mc Donald’s is the top mover, with an uplift of +9.6 to its Recommend score among customers. In addition to this, Egypt’s improvers list is populated by many food and beverage brands, highlighting the strong affinity of these brands with consumers in the country. 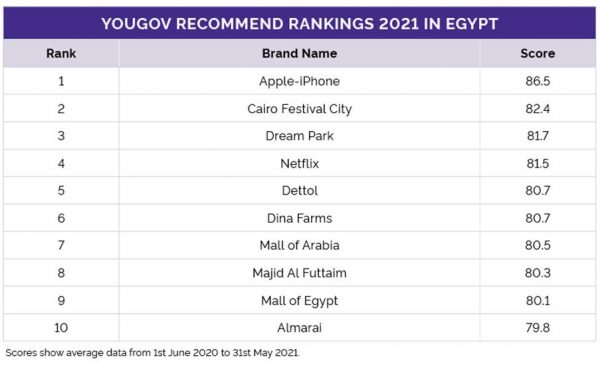 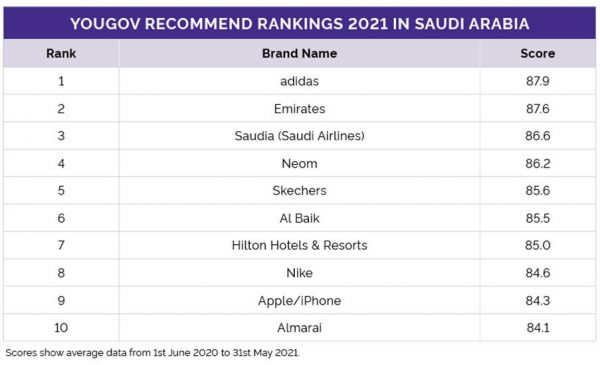 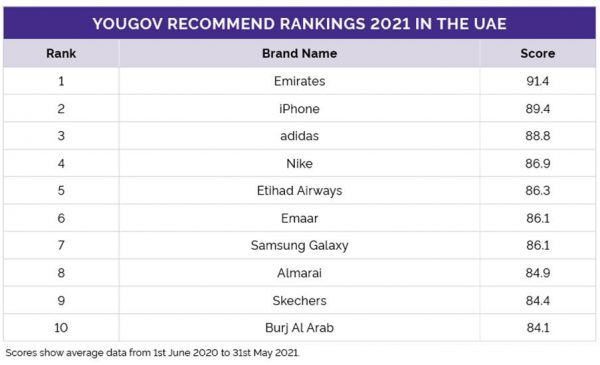