Cannes 2022: The Beauty in the Black Veil – by Fatma Al Suwaidi

‘Resolve’, that was my capstone campaign topic. We had to examine this concept and interpret it using our skillsets, and the resulting solution was open. There were so many directions to explore but I wanted to take a personal approach.

A couple of years ago when I started wearing an abaya, the traditional robe-like dress, coloured abayas were considered to be against our religion. When it was proven that nothing in the religious texts says that they are forbidden, ‘flawed’ was the word used to describe them. I did not understand the reason and wanted to delve into it through my own research.

I came across an Arabic poem called ‘The Beauty in the Black Veil’, which talks about a religiously devoted man enchanted by a beautiful maiden wearing a black veil.

The poem, which people have been chanting for 1,300 years, reached fame in the era in which we live, and was sung by the late Syrian singer Sabah Fakhri. However, few really knew the story behind the poem.

The poet is Rabia bin Amer Al Tamimi, who said he lived his life singing, spinning, and praising the rulers and caliphs until he decided to retire and devote himself to worship and asceticism.

One day, a fabric merchant from Baghdad came to the city of Medina selling fabrics of various colours. Women came to buy the fabrics, and the merchant sold all his goods except the black colour. By chance, Al Tamimi passed by him and the merchant complained to him about his predicament.

The poet decided to help the merchant with his publicity, so he composed this poem and began to sing it in the city. The first verse begins with,“Tell the beauty in the black veil what have you done to the pious worshiper?”

Every woman wanted to be that beauty and the merchant sold out all his fabrics. The beautiful owner of that black veil never existed. It was all part of a problem-solving campaign to sell excess black fabric.

I am still amazed at how one campaign has affected a multitude of cultures through the ages. It’s interesting to realise the true impact that communication has had over decades. However, this created another problem to tackle; to this day, young girls are still shamed for wearing colours.

Our beauty in the black veil was an effective identity myth created to influence sales. This myth quickly became a trend and then transformed into a tradition and an expectation. Today, an Emirati woman has to make the brave decision to defy this cultural stereotype every time she chooses to wear a colour. 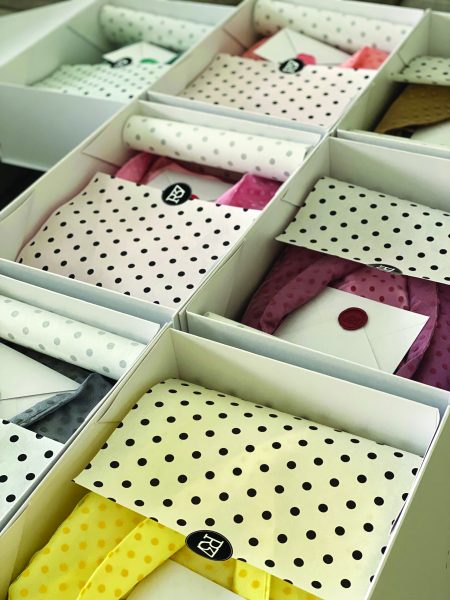 I designed a range of coloured abayas with the R37 logo. The collection will contain seven abayas, one for each day of the week, and as every day passes in the run-up to Friday the colours become bolder and the women become braver.

This campaign will spread awareness of the story of The Beauty in the Black Veil and convey the message that you are beautiful in every colour. With every abaya purchased, the packaging will contain a letter that says: “Enjoy your abaya and know that by wearing it you are celebrating a culture full of progressive thinkers who are not afraid to question.” Each letter ends with “Mlboos El Hana”, which means “May you be blessed in wearing this”.

The Beauty in the Black Veil

Tell the beauty in the black veil

What have you done to the pious worshipper?

He was rolling up his sleeves, getting ready for his prayers

when you stopped him at the door of
the mosque

O you who call to God with
upraised hands

beseeching and begging for aid

If you seek his intercession tomorrow
(on the Day of Judgement)

Tell the beauty in the black veil

For she has stolen from him his religion and certainty

and left him bewildered, without guidance

His prayers and fasts will return to you

His prayers and fasts will return to you

Don’t kill him, for the sake of Jesus
and Ahmad

God, there is no god but God…