Cannes 2022: Petrichor, and being there at Cannes – by Impact BBDO’s Ali Rez

Ali Rez, CCO at one of the two regional agencies to win a Grand Prix this year, explains what Robert Redford taught him about how love and heartbreak are steps of the path to success 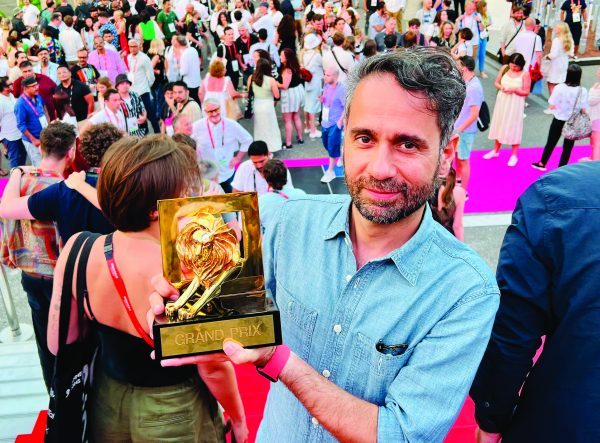 “There are decades when nothing happens, and there are weeks when decades happen,” said Lenin.

Many years ago, on my first trip to Cannes Lions as a much younger creative, I accompanied a piece of work that I thought was a sure-shot winner. At least a Gold, maybe Grand Prix if we got lucky. Cheeky posts were ready about excess baggage on the return flight, don’t trip on the stage Ali, the works.

But we didn’t even shortlist. In any category.

So this is what heartbreak is, I thought while turning my phone off to avoid calls from my boss, whom I had assured of a shiny return on a sizeable investment. I contemplated leaving Cannes early. But then a friend recommended we go see a talk at the Palais by Robert Redford.

That talk changed my life. A single, hour-long session had more impact on me than any other hour at any work event ever. From the first row, I listened to Redford talking about how as an art student, he had once hitchhiked to Cannes, and having no money, had spent the night on the beach under one of the boardwalks, where he heard all the fancy parties going on above the pier. Alone, lonely, and cold, he miserably listened to the clinking of champagne glasses and celebrations above. And then, a few years later, he was back at Cannes. But this time as a successful actor, on top of the boardwalk, clinking champagne glasses himself.

The story left a profound impression on me. I called my boss and told him that the best thing had happened with our work.

“Awesome. What did we win?”

This year, Eugene Cheong spoke to the crowd as the president of the Outdoor jury, and, specifically addressing those who had not won, mentioned that they should use the emotion they feel as motivation to win next year. And I knew exactly what he meant, as I had heard those words spoken in a different form by Redford.

Cannes Lions is full of moving experiences such as these – and you have to be there for it. This year emphasised that more than any, as thousands of people met each other again after these two years of not meeting. There was genuine love in the air – for each other, for the industry, for the work – as the hordes connected.

Taking a stroll through the gallery of the work was back. As was lining up for a talk that you just had to experience up close, like Malala’s, in the hopes that you would absorb some of its energy. And of course, there’s the Gutter Bar or the Martinez. No fuel like it.

During a talk at a university, I was once asked for the one big piece of advice I could give new entrants into creativity, and I mentioned that they need to fall in love completely. This is a business of rejection as much as it is of elation, and one must be prepared for the heartbreaks, the unconditional devotion, the unreasonable ups and downs, and the experiences that come with it. One cannot be afraid, and certainly cannot hold oneself back – it is only through that utter submission that you can generate greatness. It is that kind of love that is felt at Cannes, and you have to be there for it. You have to experience it first-hand. It reminds you why you chose to be in this field in the first place.

I felt this sentiment even more as I was on the jury this year. Instead of deciding on the work through a screen, the jury connected amongst themselves beyond just the jury room; we learnt about each other and ourselves, we became friends, we learned what our backgrounds were, what would influence us to like a piece of work over another. We were present and never behind a blocked camera.

It rained this year at the festival – heavy rain. A friend and I were sitting watching the rain, and smelling that scent you smell that comes from the earth when rain mixes with it. We were trying to think of the word that describes it. It’s petrichor. That’s the word.

This year, I went up on stage to collect a Grand Prix. It had been more than a decade since I was there in that Palais for the first time, listening to Redford talking about how he had crossed the horizontal line that was the boardwalk and ended up above it. For me, this was the week where more happened than the many weeks that made up the last few years.